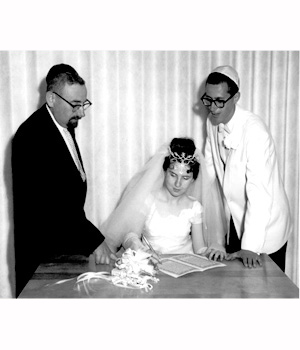 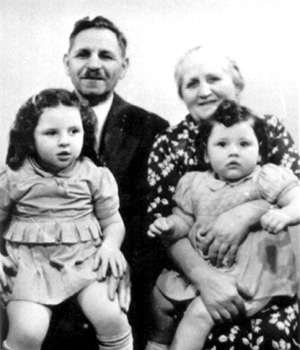 Until the age of 14, I lived in the Flora Court with my parents, two younger sisters and one brother. During my early years, my maternal grandparents lived with us as well. My preschool days were spent with my Zaida, reading the Yiddishe Vort and visiting shopkeepers on the Farmers' Market. When I was 4 ½, my Baba began walking with me to the Talmud Torah on the corner of Flora and Charles. I attended Day School at that location until the end of grade 7.

During my years at Talmud Torah, from the age of 6, I sang in the Shabbat choir under the direction of Cantor Brownstone. I sang solos, but being a girl, couldn't daven. I was given the job of teaching the younger boys portions of the service. One day, the elders of the synagogue decided that I looked like a Kallah Moid and my days with the Shabbat choir ended. Cantor Brownstone then took me into the Jewish Community Choir, where I sang until it was dissolved.

I was one of the eight students, six girls and two boys, who formed the first grade 8 Day School class in the new Talmud Torah on Matheson and Powers. From grade 9 to the end of grade 11 we joined the evening classes of Maimonedes College. During the day, I attended Aberdeen and St. John's Tech. In grade 11 at Maimonedes, we were given teacher training. I was one of the students hired to teach Hebrew evening classes at the Herzlia Academy, while attending the University of Manitoba.

My university years were filled with Hillel House and the programs offered by Rabbi Zalman Schachter. These years were also busy with YMHA Young Adult Group activities and being a Y Juvenile "B" club leader. After one of the Y's Saturday night dances, my husband-to-be took me home. Six months later we were married by Rabbi Dr. A. Kravitz at the Herzlia on the hottest day of the year, with no air conditioning. On July 10, 2000, we celebrated our 40th wedding anniversary.

Forty years ago, Rabbi Kravitz asked me to teach the Nursery and Kindergarten classes at the Herzlia. I agreed. After one year, Ron and I began our family and I continued to teach on a part-time and substitute basis. Jeffrey was born in December 1961, Brian in August 1965, Adrienne in March 1971. In 1971, I returned to university on a part-time basis (for a number of years) to attain a BA (Hons.) in Sociology, a Certificate in Education, a pre-Masters in Educational Psychology (Counselling and Early Childhood), and various credits in Mediation.

In 1980, I began working in the Winnipeg School Division No. 1 and remained with the division as a Nursery/Kindergarten teacher until my retirement in June 1999.My years have been enriched with the successes of our children, their chosen partners and to date, two grandsons and two granddaughters.

My years have been further enriched with singing at the Sharon Home, in amateur theatre productions, and in synagogue choirs. As well, I have travelled to distant lands. I'm grateful to my husband and children for giving me the encouragement and opportunity to follow my dreams.