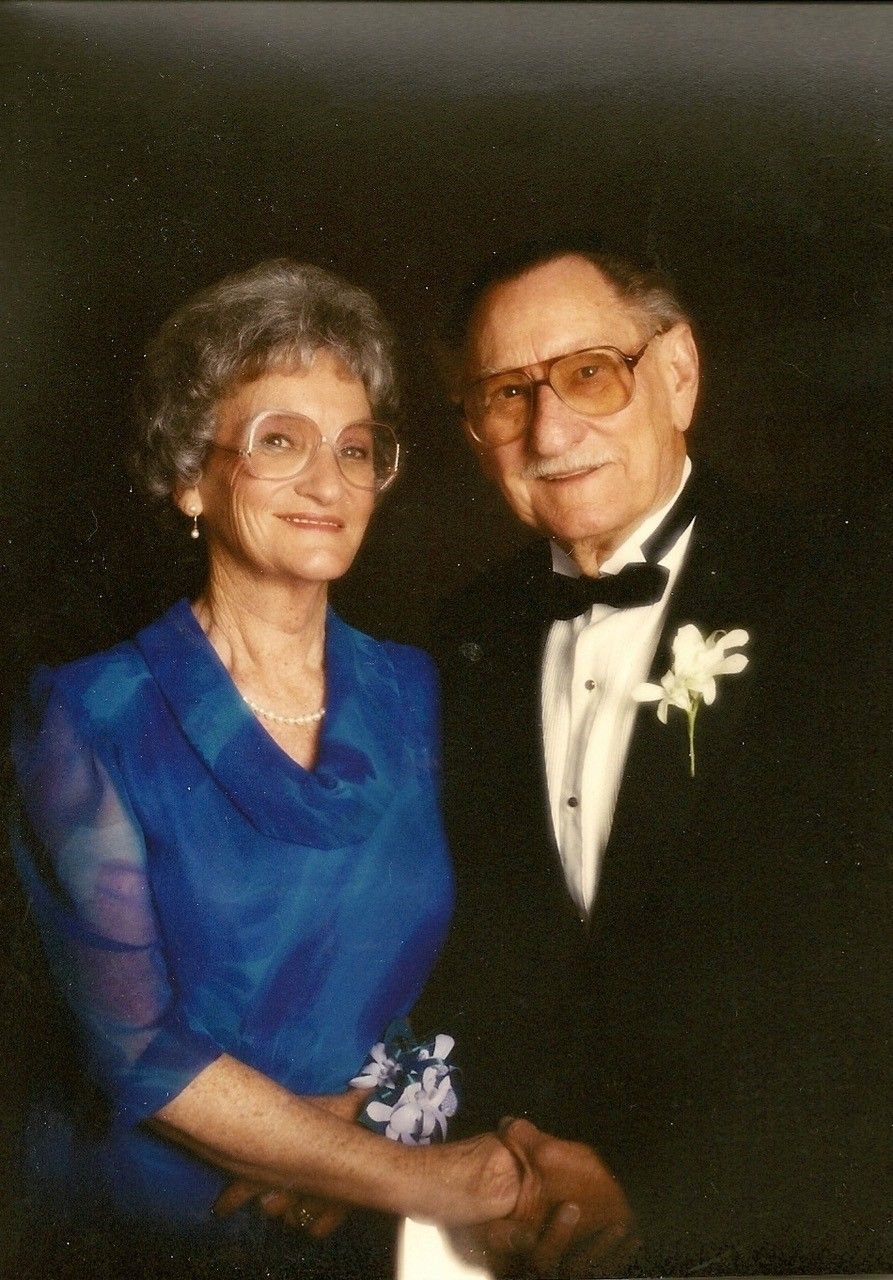 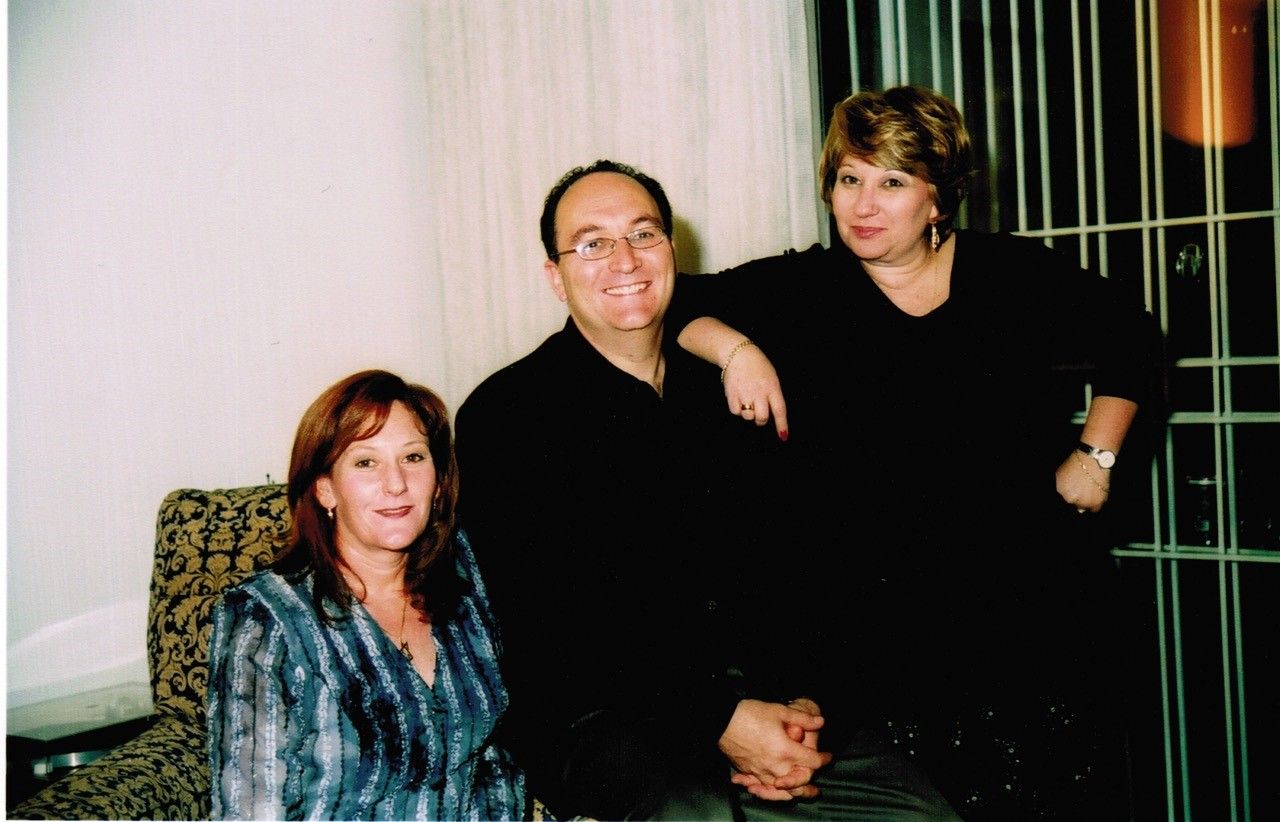 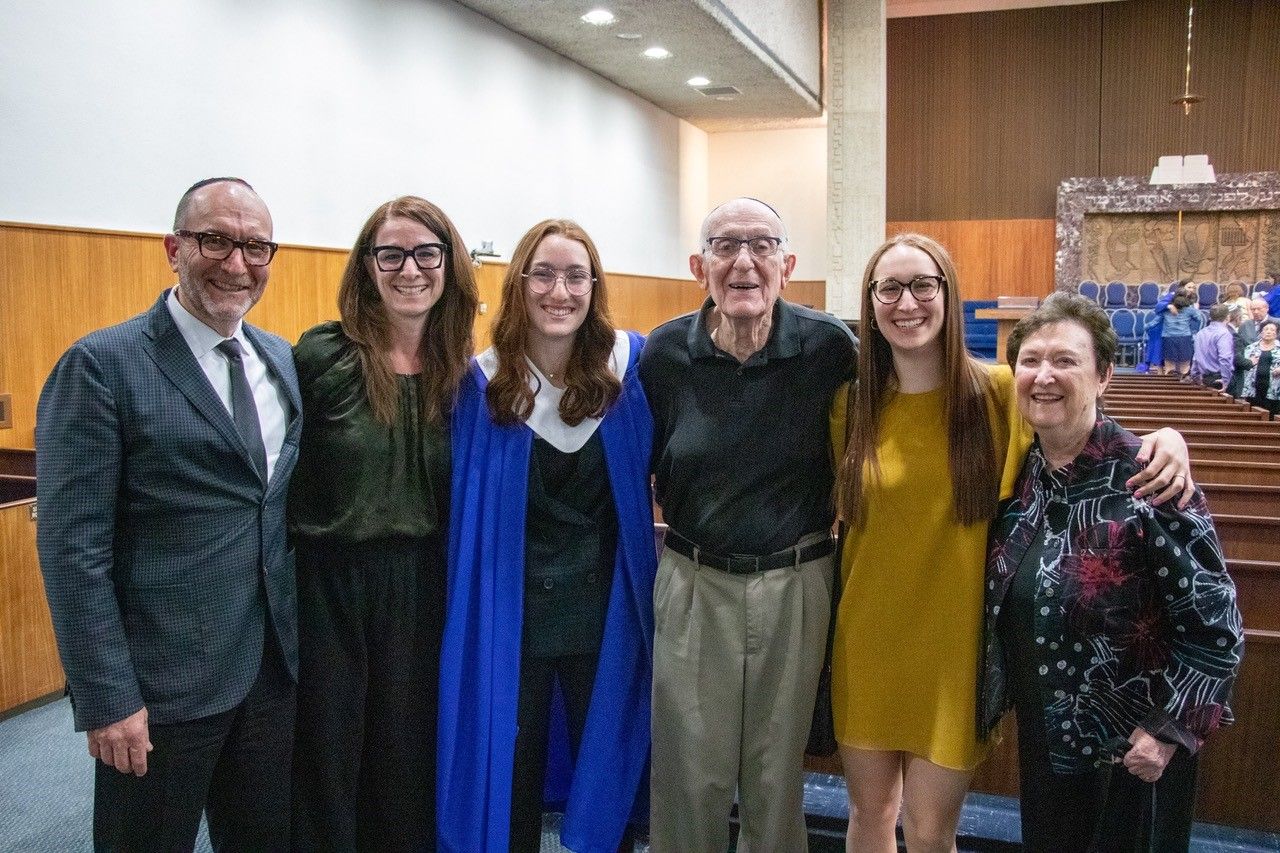 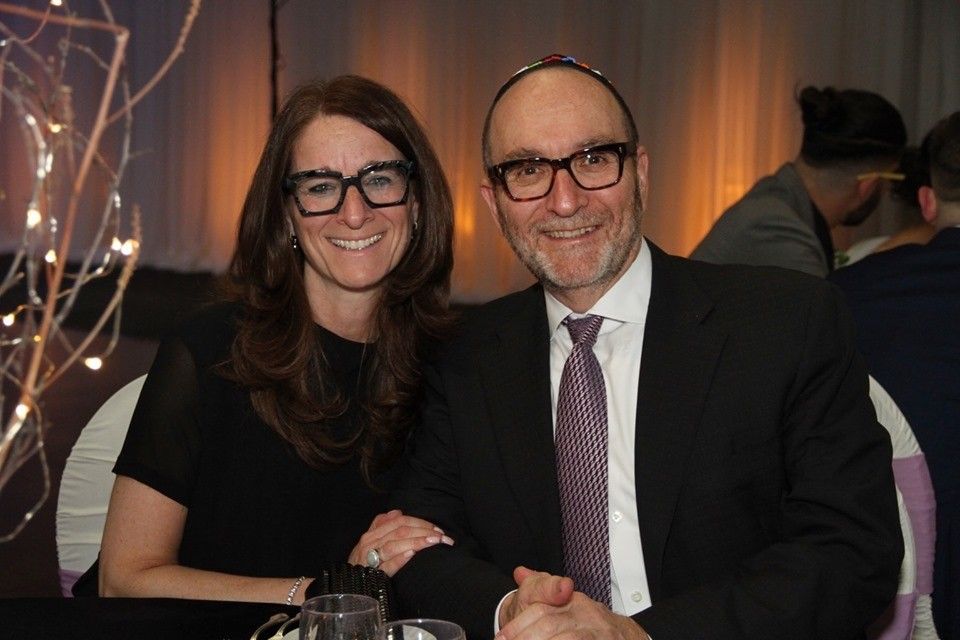 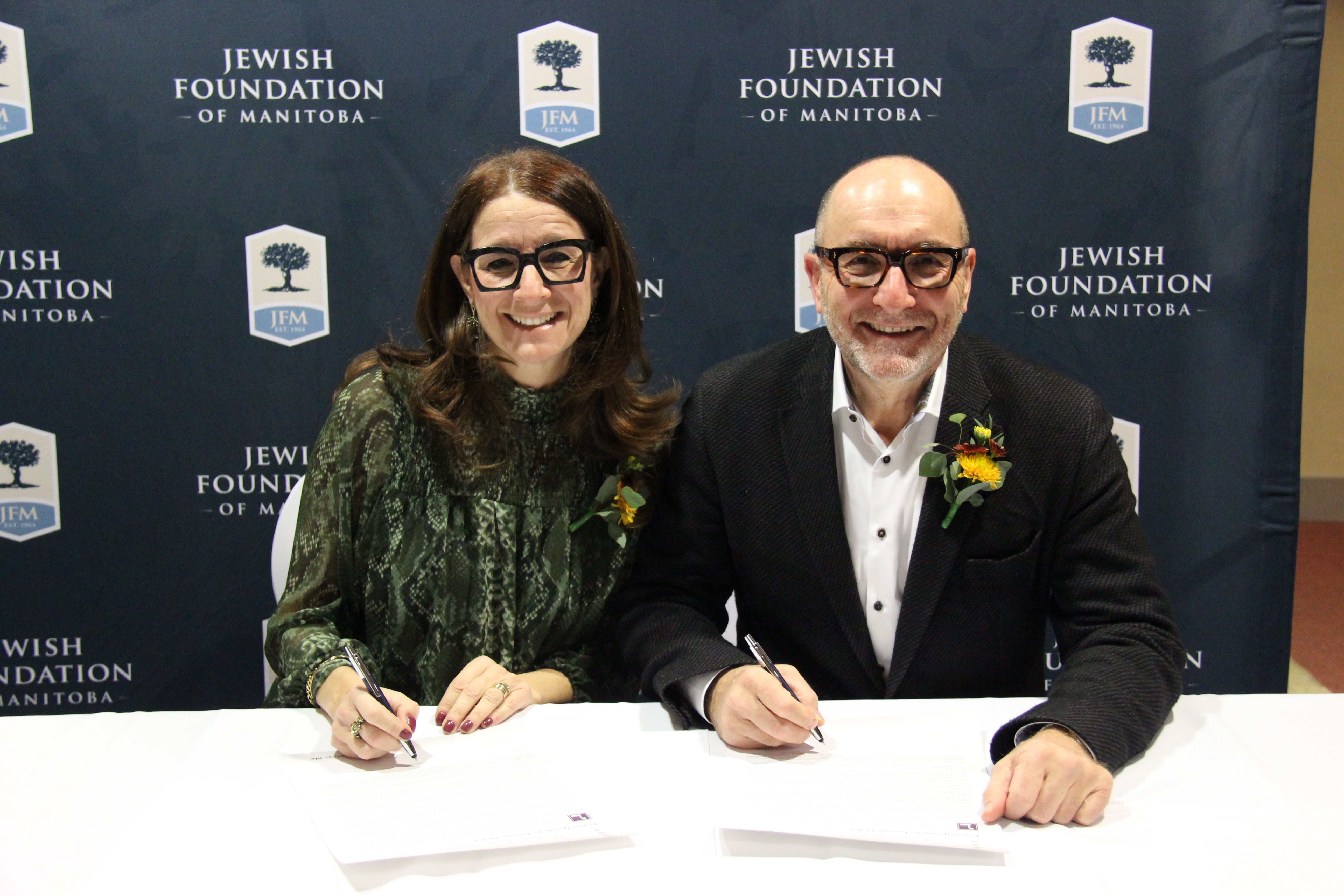 Daniela and Eric sign the Endowment Book of Life

Hardly a day goes by when I don't feel an enormous sense of gratitude for the fact that my life's journey brought me to Winnipeg and this remarkable Jewish community. I feel truly blessed.

I was born in 1960 in De Aar, South Africa, a small railway hub in the semi-desert central part of the country.

My parents were Abraham (Aubrey) and Anita Jacobsohn (née Folk). My father was born in De Aar to Isadore and Ella Jacobsohn (née Skolna) who had arrived in Cape Town from Talsi, Latvia, in the early 1900s. My grandfather served the small but vibrant Jewish community in De Aar as a shochet, and later became a merchant. My father lived his whole life in De Aar, other than the time he served in the British 8th Army, when he fought at the famous Battle of El Alamein in North Africa in 1942.

My mother was the daughter of Sam and Rae Folk who lived in the resort town of Muizenberg. My parents met in Muizenberg when my father visited on vacation. They married and lived together in De Aar. My father owned a toy store and my mother was a "nursing sister" (the equivalent of a Registered Nurse in Manitoba).

My father passed away in 1993 and my mother in 2000. I have three sisters —Felicia, Sheryl, and Bernice— who all still live in South Africa.

While the Jewish community of De Aar was as large as 100 families in my grandparents' day, the community was in severe decline when I was growing up. When I was 12, my parents sent me to boarding school in Kimberley—about 300 kms away—so that I would have access to a cheder on the weekends. I stayed at the school until the age of 18. After graduation, I attended the University of Cape Town Medical School from 1979 to 1984. I played rugby all the way from childhood through medical school.

During my internship in 1985, I bumped into a former medical student who was a few years older than me. He had just returned from Saskatchewan and he urged me to reach out to the province to see if there was a position available for a new grad from South Africa. While my credentials weren't a fit for Saskatchewan, I did secure a one-year contract in Grand Bank, Newfoundland.

After a few months in Grand Bank, I was looking for something a little less isolated. My cousin, David Folk, also a physician from South Africa, urged me to join him in Manitoba. I accepted a position in Virden and served as a general practitioner there. Two weeks after settling in Virden, I was invited to Shabbat dinner in Winnipeg at the home of Wally and Susana Bloch. Wally was my cousin David's dentist, and the Blochs were the parents of a young woman named Daniela. Daniela and I started dating and were married four years later in 1990.

After my time in Virden, I went to Halifax to pursue a speciality in anesthesia. It was in Halifax where Daniela and I were first married by a justice of the peace. We were later married under a chuppah at the Herzlia Synagogue in Winnipeg. I finished my anesthesia specialty in Winnipeg, and then spent another year specializing in intensive care medicine.

In 1994, Daniela and I moved to Rochester, Minnesota, where I pursued a speciality in cardiac anesthesia at the Mayo Clinic. From the Mayo, I accepted a position at the University of Chicago while working on a Master degree in Medical Education. We stayed in Chicago for two years before returning to Winnipeg.

In 1997, Daniela and I welcomed my teenaged nephew Marc to our family and he stayed with us through Grade 12 and university, seven years in total. Our first daughter, Maxine, came along in 1999 while we were still in Winnipeg. In the meantime, Washington University School of Medicine in St. Louis offered me a very exciting position. At first I said no, and then they made it very difficult to say no.

And so Daniela, Marc, Maxine, and I moved to St. Louis in 2000 and our daughter Sarah was born there at the end of that year. We stayed for six years and I had the privilege of working at one of the top medical schools in the United States. We loved our synagogue in St. Louis, we made many friends, and our girls thrived in their Jewish day school.

By 2006, we made the decision to return to Winnipeg. We wanted to be closer to Daniela's parents, and I was offered a wonderful position as Professor and Head of Anesthesia at the University of Manitoba and as Medical Director of Anesthesia Services with the Winnipeg Regional Health Authority. Today, I remain a Professor at U of M and am Associate Dean of the Medical School. I practice medicine at Health Sciences Centre and at St. Boniface Hospital.

I feel very grateful for my career here and for the life we have built together in this exceptional Jewish community. I take great pride in my volunteer committee work with the Jewish Foundation of Manitoba and as a canvasser for the annual Combined Jewish Appeal campaign. I believe strongly that to sustain and enhance the services we have in our community, everyone needs to do their fair share and even stretch a bit when it comes to philanthropy.

There are important and emerging needs in our community. I am so impressed by those who give so generously, and remain concerned that there are still many people who don't give at all. I urge all of us to step up to preserve and enhance what we have here. While I wasn't born into Winnipeg's Jewish community, I feel a great sense of ownership, pride, connection, and gratitude.

Our bequest to the Leave More Than Memories Fund at the Jewish Foundation of Manitoba is a heartfelt expression of those feelings.