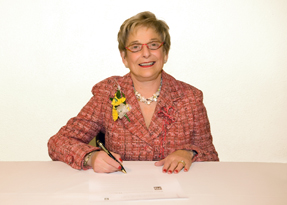 Elyse Halprin signs her story for the Endowment Book of Life

My father, David Theodore Samuels, was born in Toronto to German immigrants who had arrived in Canada in the late 1800s. He came to Winnipeg to seek employment and met my mother Nell Sodomsky. She was born in Russia and immigrated to Canada with her parents in 1903 at the age of three. In Winnipeg, the family grew to nine children.

My grandfather, Eli Sodomsky, established E. Sodomsky & Sons, Wholesale Jewelers. While in time, many of Eli's sons ventured into their own businesses, my father joined my grandfather's business with his brother-in-law, Sam Sodomsky, and they formed National Jewelry Company. After the death of my father in 1951, my brother, Barnett Jule Samuels, joined with our Uncle Sam to form National Wholesale, which later became National Record Distributions of Winnipeg

I grew up in the west end of Winnipeg and attended Gordon Bell High School. In January, 1951, upon graduation from the University of Manitoba, I married Rivan Kenneth Halprin. My brother Barnett married Lillian Lewis in June, 1951.

In January, 1953, our first child was born, Susan Lori, followed by Tracy Ellen in February, 1957, and David Samuel in December, 1958. Sadly, Tracy passed away in September, 2003, leaving a void within our family. She had attained the designation of C.G.A. and had a promising career at Revenue Canada.

Susan went on to marry Bryan D Klein and has three daughters, Baillie Rae, Sarry Nell and Julie Cara. In August, 2010, Baillie married Daniel Chisick, also of Winnipeg. Our son David resides in Toronto. He married Dr. Linda Redman in March, 1992, and they have a daughter, Emily Allison.

We have spent the summers over the past 53 years at our cottage at Winnipeg Beach where, with our relatives, friends and neighbours, we have raised our families together — leaving us with wonderful memories.

In between raising our family I dedicated much time to volunteer work in the community, mainly with Canadian Hadassah WIZO and the Women's Division of the CJA. I was the first co-chair of the Winnipeg Hadassah Wizo Art Auction and a co-chair of Super Sunday.

We continue to maintain a close relationship with our family and friends in the Jewish community that we have grown to love. We are most fortunate to have four loving granddaughters who have been raised with a conservative Jewish education, and hope that they will continue to be active members of a Jewish community wherever they shall reside.