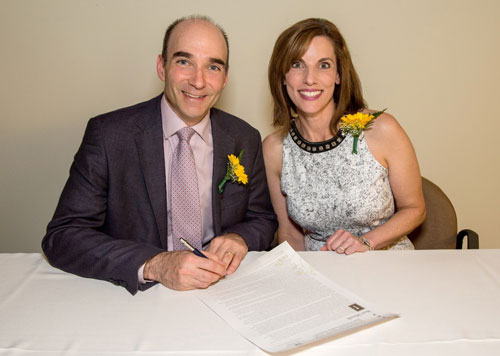 I was born in 1968, the youngest of the three children of Bernie and Sybil Lerner (née Lebane). My father was born in Winnipeg in 1925. His parents were Solomon and Rose Lerner (née Mallin). Solomon was born in Russia and immigrated to Winnipeg in 1906. Rose was born in Russia in 1890, but grew up in London, England. When she arrived in Canada in 1913, she was hired as the first Matron of the Esther Robinson Jewish Orphanage of Winnipeg. That is where she met my grandfather, Solomon who at that time had two sons in the orphanage under her care. Solomon owned a general store, and travelled extensively for his work. They married and had a daughter and two sons.

My mother was born in 1937 in Winnipeg to Samuel (Sam) and Esther Lebane (née Knelman). Samuel, one of 10 children, was born in Winnipeg in 1903. Esther was born in 1904 in Russia and came to Canada as an infant. They were married in 1928 and in 1941, Esther and Sam moved to Saskatoon where he worked for Buchwold's Dry Goods Wholesale Ltd. In his spare time he was an active member of B'nai Brith and loved sports. Sadly, Samuel passed away at the young age of 47 from a heart attack. Esther, with two young girls to support, returned to Winnipeg in 1950 to be closer to family.

Of my four grandparents, all but Rose passed away before I was born. I have clear memories of drinking tea in Rose's apartment and being impressed by her attention to manners, the way she would extend her pinky finger while sipping tea, and her story about curtseying before Queen Victoria.

My parents were married at Shaarey Zedek Synagogue in 1962. They first met as cast members in a YMHA drama production, but did not start to date until they met again in Clear Lake, Manitoba a couple of years later. My oldest brother, Brian, was born in 1964; Stephen followed in 1966; and then me in 1968.

My father's chosen career was in the marketing and development of new home subdivisions in Winnipeg, rising to the position of vice president of Sales and Marketing for housing companies including Ladco Homes. He was the first chairman of the Manitoba New Home Builders Warranty Program. When work slowed down for my dad in 1979, we moved to Calgary where we stayed for five years, returning in 1984. In Calgary, my mother, for the first time, sought employment outside of the family home where she enjoyed a long career with the Federal Government, initially with Energy Mines and Resources and then with the Royal Canadian Mounted Police. Both of my parents had other interests. My father was an accomplished badminton and tennis player and my mother was active in Hadassah, ORT and with the Ramah School PTA.

Until leaving for Calgary, we were raised in the "south end", on Waverley Street, surrounded by many neighbourhood friends. Every year I looked forward to my summers at Clear Lake where we stayed at Donner's Resort. We knew several other Winnipeg families who returned there annually, and have fond memories of visiting by the pool and the occasional backgammon tournament. Whether in Winnipeg or Calgary, our house was full of the scents and sounds of Jewish life — cooking, baking and celebrating the holidays with my cousins on both sides. Through example, my parents taught me the importance of connecting with family and the benefit of creating and maintaining traditions over the years.

Growing up, I took swimming, ballet and Chai dancing classes and also played some tennis. I attended Ramah Hebrew School until the end of Grade 5 when my family moved from Winnipeg. I loved my time in Calgary. I was there during the formative years of 11 to 16. I continued my Jewish education at the Calgary Hebrew School until Grade 9 and then went to Henry Wisewood High School for Grade 10. I made great friends in Calgary and especially loved to hike with friends in Fish Creek Park. When I returned to Winnipeg in 1984, I attended Shaftesbury High School from where I graduated.

After high school, I pursued a Bachelor of Arts degree at the University of Manitoba, majoring in history and minoring in psychology. In 1996, I also earned a degree in Human Ecology, with a focus in Child Studies/Management. Throughout university, I worked in retail and then at On the Move Day Care Centre.

I met my husband David on a blind date in 1989, arranged by my now sister-in-laws Sarah (Kroft) Morry and Hilary (Kaufman) Lerner. I continued to work in the day care field until giving birth to the first of our three children. Our daughter Julia, was born in 1997, Samuel ("Sam") in 1999, and then Adam in 2003. Our children are wonderful: active and engaged; energetic and smart. With them, I try to promote the importance of education and kindness, principles that my parents shared with me. It is also very important to me that our children receive a Jewish education so they can make informed choices about Jewish life as they get older. I love the family time we spend together, and I am so proud to see my children work so hard at achieving their goals.

David and I both place a high value on community service. I am happy to have been a member of the Gray Academy Parent Advisory Committee, running the Shabbat challah program and various school fundraisers. I have also been active with the Jewish Federation of Winnipeg as a Super Week Co-chair, as well as a member of the Women's Management Team. Also important to me is volunteerism in the larger community. In 1999, I joined the Steering Committee for the Teddy Bears Picnic, a huge community event put on by the Children's Hospital Foundation. When I have spare time, I enjoy my exercise classes, baking, being a "hockey mom" and spending time with my family.

I hope that my participation in the Jewish Foundation of Manitoba's Endowment Book of Life helps our community remain vibrant for the long term. I'm honoured to give back and to add my story. I love the idea of so many people telling their stories — it's a gift for future generations, and an example for our children.