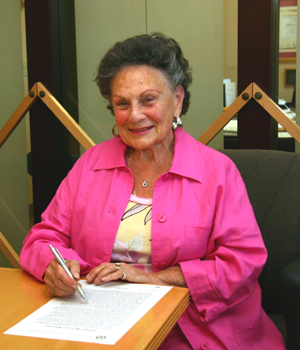 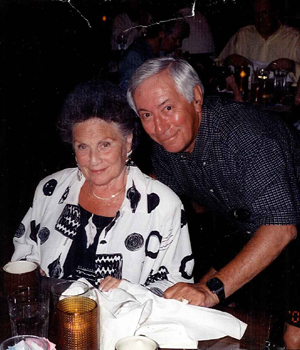 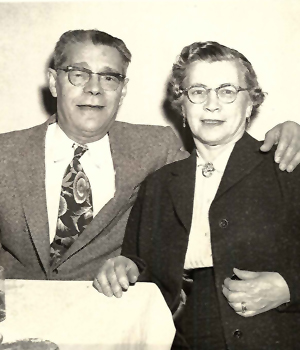 Morris and Rochel Wiseman, circa 1955 at a Hebrew Sick Dinner 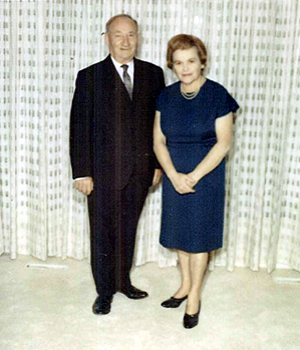 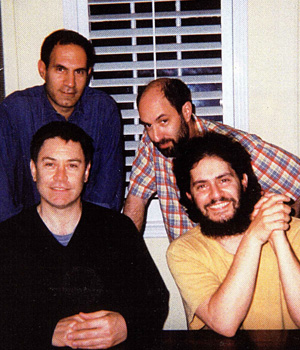 I was born in Winnipeg in 1930. My parents, Herb and Rose (Ginsberg) Winston, had emigrated from small towns near Kiev in the early part of the century, where their once large families had dwindled as a result of small pox and other diseases. Over the years my father, the son of Jacob and Chava Weinstein, brought over many of his family members and settled them in Camper, Manitoba, on land that the government sold for $5 an acre.

My father, like his father and brothers, was a furrier by trade. A true nature's nobleman, he befriended many of the native trappers and regularly took my older brother, Ray, and I fishing near their homes on Netley Creek. He was active in the Fur Auction and socialized frequently with other furriers. After working at Scanlin Furs he opened his own fur store on Portage Avenue; a tremendous feat for someone who was illiterate in English and could only sign his name. In fact, he did not learn to write in English until he was almost 80 and I hired a personal teacher for him. When he wrote a letter to his brother in the United States he considered it one of his proudest achievements.

My mother was a selfless, artistic woman who loved to cook and to entertain. Hadassah was her second home; she became vice-president of the Ezra Chapter in 1941. Her parents, Mendel and Dinah (Greenberg) Ginsberg, arrived in Winnipeg when she was five. They were very poor and had to take in boarders to make ends meet. Fortunately, Dinah's sister was married to the owner of Oretzki's Department Store and he gave his nephews paying jobs. In spite of their poverty, my mother received a good education and found work as a secretary at a Portage Avenue grain firm.

Although my mother was much younger than my father, they were compatible and united in their efforts to make sure that their children received a Jewish education. This was particularly important to them as we lived on Eugenie Street in an Anglo/Franco neighbourhood of Norwood/St. Boniface. We regularly attended the Shaarey Zedek on Dagmar Street, and I made many new and long lasting friendships there and at the YMHA.

Both Ray and I attended Norwood Collegiate. Although I often wished I went to St. John's Tech, I did have many good friends at my school. Ray excelled in sports at Norwood and at the University of Manitoba, where he was known on the football field as 'triple threat Winston.' He served in the navy, graduated from electrical engineering, and began working in our father's fur store. He eventually left the business, earned his Masters in Business Administration and became a liaison/spokesperson and trade school manager for the Manitoba Fashion Institute. He is married to the former retired teacher librarian Evelyn Shinoff and they have three children — Richard (Rhonda Hochman), a forensic accountant in Edmonton, Phyllis Bedder (Wayne Leach), a Winnipeg family physician and Gail (Tom Kendall), Director at the Bathurst Y in Toronto - and four grandchildren.

I studied interior design at university and graduated in 1950, the same year that I married Mannie Wiseman. Mannie was an optometrist who had just taken over Strains Ltd., a camera/optometry business renowned for its flashing camera sign. While I had learned to celebrate Jewish holidays from my family, I learned to love and respect Judaism from my husband. He was an active participant in the Saturday morning services at Shaarey Zedek. His father, Morris, had worked as a dairy farmer and then invented Dainty White bleach, which became a household name across the prairies. He was a founder of the Hebrew Sick Fraternal Lodge, while Mannie's mother, Rachel (Colish), was the president of the Miriam chapter of Hadassah. They instilled in Mannie a love of Israel that he then shared with me and with our four sons - Howard, Gordon, Ron and Bob — whom we sent to Israel for their respective sixteenth birthdays. Mannie's sister Mona Sherman (predeceased by her husband Louis) lives in Portland with her family.

Early in our marriage Mannie was very involved in Hillel and Hebrew University. This gave us the opportunity to meet many interesting people. I was involved with the Ramah School PTA, and a life member of Hadassah and of National Council of Jewish Women. One of my most rewarding volunteer experiences was working with children with disabilities through the Institute for the Deaf. Around 1980 we suffered arrears in business and Mannie had a heart attack. With much effort and determination he turned his life around, took specialty refresher courses and went back to optometry. He opened his own office in Polo Park in 1984, working there until his untimely death in February, 2002.

When our sons all went off to Toronto for their post secondary education, I returned to university, completing my Fine Arts degree in 1981. I rented a studio with friends and continue to pursue art to this day. I also volunteer in the ESL program at Shore Elementary, and am pleased to see how well the immigrant children blend in at the school. As well, I do volunteer ESL work in schools in Israel, where I spend the winter months visiting my son, Ron

Ron made Aliyah three years ago and now lives in Tel Aviv. He works as a musician, performing with his Jewish reggae band, and as a documentary film maker. Gordie (Gabriel Emmanuel)) keeps an apartment in Tel-Aviv and visits the country often. He is an immigration lawyer/writer in Toronto whose play 'Einstein' has been widely produced. He is also the father of my only grandchild so far, 13-year-old Avia. Howie, the eldest is a writer living in Toronto working as a television and film editor and director. He is the author of 'The Year of the Flood,' a play about my father. Bob, the youngest, was a member of the band, Blue Rodeo. He is now a producer, composes music for television and films, and performs throughout Canada and the U.S. He is married to Magali Meagher, also a musician.

Even though none of my children live in Winnipeg, the city is still my home. By participating in the Endowment Book of Life I can help to ensure a healthy future for those who do remain here, while demonstrating for the record that the Wiseman/Winston family was a viable part of the Winnipeg Jewish community.