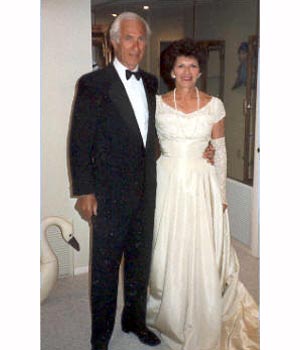 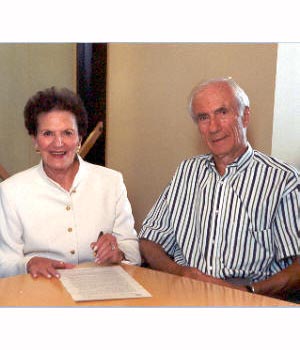 Percy and Elaine sign their Endowment Book of Life story

Percy Goldberg grew up in Altona Manitoba, a small farming community located 70 miles south of Winnipeg near the U.S. border. His father Morris had left his home in Eastern Poland (Wszygrodek) as a young man, travelling first to New York and then to Winkler Manitoba where he had relatives. For five years he made his living as a peddler in the Winkler area, and in 1917 moved to Altona where he operated the Commonwealth General Store. The residents, mainly Mennonites, welcomed the Jewish Goldbergs into their midst. Percy was raised in a kosher home and his parents hired a Hebrew teacher (Noach Witman) who resided in their home, prepared the boys for their Bat Mitzvah, and worked in their general store. For a short time the family moved to Winnipeg where Morris operated a chrome business called Zolmark Industries on King Street, but the depression forced the family back to Altona. Morris retired to Winnipeg in 1950.

Percy's mother, Flossie, came from a family that followed a similar path one generation earlier. Her parents, Aron and Lifshe Cohen, came from Chaan and Shumsk, Poland and arrived in Winkler Manitoba about 1895. He also operated a store in Winkler and retired to Winnipeg in 1926.

Morris and Flossie met in Winkler and married there in 1919. They had four children: Percy (born in 1921), Stanley, Eileen and Adele. They were actively involved in both local and Israeli causes.

Percy attended the local schools in Altona. In 1939, at the age of 18, he moved to Winnipeg and attended the University of Manitoba where he earned a Bachelor of Arts degree. He went on to the University of Toronto and graduated in 1946 with a Doctor of Dental Surgery (D.D.S.) designation. He took over a practice in Altona until 1950 and then moved to Winnipeg, establishing the Portage Avenue Dental Group where he practiced until the end of 1994.

Elaine Goldberg's father, Henry (Hersch Eliazer) Morton, was born in Minsk Russia. He came to the United States in 1903 at the age of 14, he settled in Boston, Massachusetts. His first job was as a theatre usher and in 1912, he moved to Winnipeg where he bought a small theatre. This was soon developed into a chain of theatres in Winnipeg (Garrick, Odeon, Rialto, Beacon and Odeon Drive-In), and in Saskatoon (Victory, Tivoli, and Roxy.) He was a greatly respected leader in the motion picture industry and was very active in his community. He passed away much too soon at the age of 64, in August 1951.

Elaine's mother, Eva Rebecca, was one of the 10 children of Hyman and Bessie Ginsberg. She was born in England and before her marriage worked as a notary in the Hersch Colony, Saskatchewan. She and Henry were married in 1926 and moved to Winnipeg where they had two children - Elaine, born in 1930 and Paul, born in 1938. Eva Rebecca was very involved in the community, helping with the establishment of many organizations such as the Jewish Orphanage, Hadassah, the National Council of Jewish Women and the Jewish Welfare Fund. She was a very bright woman and after her husband passed away she, together with daughter Elaine, continued to operate the theatre business until son Paul was ready to assume those responsibilities.

Elaine was born on Assiniboine Avenue, grew up on Waverley Street and attended Grosvenor, Robert H. Smith, Rupertsland Ladies College and United College. After her schooling she moved to Toronto to work at Dr. Blatz's School for Children as a nursery school teacher. It was in Toronto at the Grey Cup Game in 1954 that she met Percy Goldberg. She moved back to Winnipeg and they were married in 1954.

In 1955 the Goldbergs had their first of four children: Henriette is married to Dr. Richard Corrin (who now operates the Portage Avenue Dental Group) and they have three children, Matthew, Rachel and Adam. Barbara was born in 1956, Patrice in 1958 - she and Frederick Mesch have a son Eric, and Laurence in 1959. He is married to Diane Spivak and they have three children, Jonathan, Rebecca and Michael. The Goldbergs are proud of their family and work hard to maintain a close family bond despite three of their children living outside of Winnipeg.

Like their parents before them, the Goldbergs have been very active in community life. Among other involvements, Percy is Past President and Past Regent of the Alpha Omega Dental Fraternity and Past President of Western Canada Dental Society. Elaine has served on the Boards of organizations such as St. Boniface Hospital, Winnipeg Symphony Orchestra, and CancerCare Foundation. Elaine helped to found the Guardian Angel Breast Cancer Benefit, and is especially proud that their daughter Hennie is now the chair of this very successful fundraising event.

Notwithstanding some health problems, the Goldbergs say they've been married 49 years and at present are having "quality time!" They enjoy travel, the arts and family occasions. "We hope and pray," they conclude, "that our Jewish community will remain strong and viable, that it will grow and that Winnipeg will continue to be a safe and healthy community in which to live."