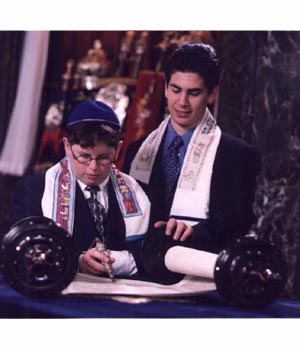 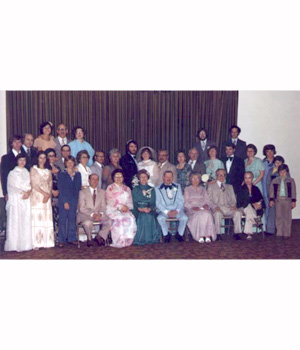 IAN AND ELAINE'S WEDDING DAY TOGETHER WITH THE PINSK FAMILY... 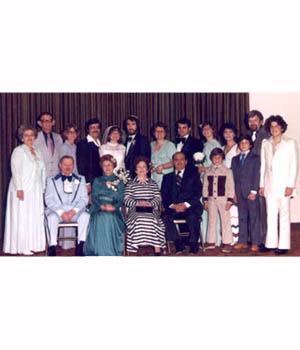 ...AND THE RABER FAMILY

My father, Ben Raber, was born in Poland on June 17, 1920. A year later, he came to Canada with his parents Sam and Liba Raber and two brothers, Wilfred and Michael. A sister, Anne, was born after the family settled in Winnipeg's north end. My mother, Sadie Pinsk, was born in Regina, Saskatchewan on August 18, 1921 to Ida and Sam Pinsk. Her siblings were Goldie, Dora, Bunny, Anne, Mona and Zalman. Ben and Sadie met in Regina. They were married on March 5, 1943.

Together, my parents ran a family outerwear business, my mother in the office and my father in the factory. My sisters and I worked in the business weekends and summers. It was a successful business and supported the family until it was sold in 1985.

I was born in July 1955 and have two older sisters, Sharon and Marilyn. The year I was born my parents moved to River Heights, and it was there that I spent my childhood and youth. I attended Montrose Elementary, River Heights Junior High, Grant Park High School and night school at Herzlia Synagogue. After high school, I worked at the University of Manitoba in the Budgets and Grants, and Purchasing departments. In 1977 I married Dr. Ian Goldstine. We have two children, Daniel, born in 1982, and Jason, born in 1985. In 1993, after a time at home raising my family, I began a career at the Combined Jewish Appeal where I now serve as Women's Campaign Director and Financial Resource Development Associate.

Community involvement has been a way of life for me. My father was very active in the community and canvassed for the CJA for over 40 years, and my mother was involved with Histadrut, National Council of Jewish Women, Brandeis Lodge Ladies Auxiliary, as well as Combined Jewish Appeal including a term as chair of Super Sunday. As a teen, I was active in USY and was President of the Gabriels Chapter of BBYO. In 1979 I became involved with National Council of Jewish Women, and have served as President of the Sarah Branch, President of the NCJW Winnipeg section, and served as National treasurer and Vice President. I have served on the PTA of Ramah Hebrew School, the Business and Professional Development Committee of Canadian Friends of Hebrew University, and on the Board of the Shaarey Zedek Sisterhood.

My upbringing was traditional in the sense of a strong emphasis on Jewish values such as the importance of family, tzedakah and community involvement. My Endowment Book of Life commitment comes as a natural extension of those values and is an opportunity, like my parents did before me, to lead by example. Ian and I hope that our children will learn by this and follow us as committed individuals in their community. I have always cared deeply about the activities of this community and want the next generation to be able to continue to do the things that are important to our survival as a flourishing people.