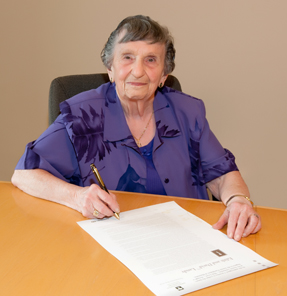 Edith Landy signs her story for the Endowment Book of Life 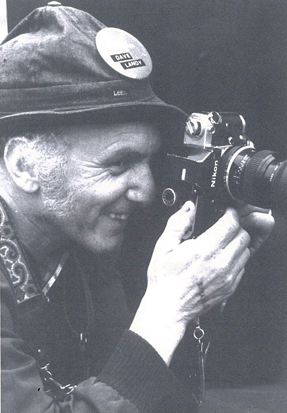 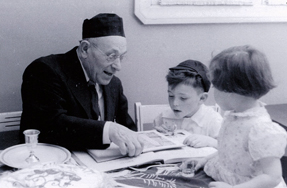 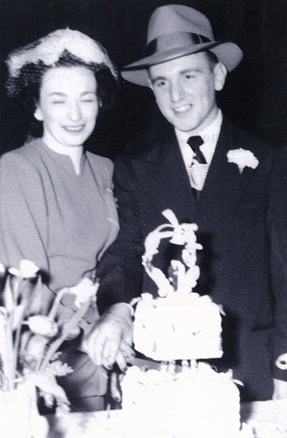 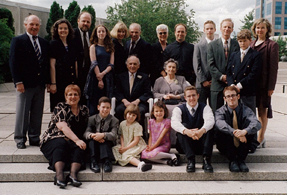 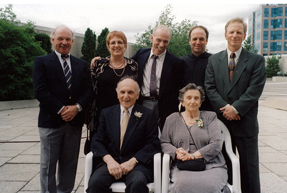 I was born in Winnipeg on June 30, 1920, the third daughter of Reva (Fordman) and Joseph Freiden. I was raised on Stella Avenue in the North End, in a home shared with my maternal grandmother, Malka (Kovensky) Fordman, several aunts and an uncle. My mother passed away when I was 8 years old. I was raised by my father and sisters Syma and Jennie, along with the extended family members living in our household and in our neighborhood.

My father was born in Russia in 1890 and came to Canada in 1913, leaving behind his parents and siblings as he fled the persecution of the pogroms. A year later he sent for my mother and sister Syma. He was a tailor by trade and had a small shop on Portage Avenue. He was fondly known as "Joe of the West End" by his many loyal customers. His passion, however, was for story-telling, dramatic reading in Yiddish and acting. Although he had limited formal education and lack of opportunity when he was young, he pursued his passion for literature and his love of learning throughout his adulthood. Along with his many favorite authors, he enjoyed the Yiddish translation of the works of Shakespeare. He loved the theatre and was a long-standing and respected member of Winnipeg's Yiddish Theatre.

I received my early education at the Aberdeen School, attended St. John's High School and took evening classes at the I.L. Peretz School, graduating from Mittel Shul. For Grade 12, I attended "Depression College", started by my sister Syma and Etta Grand where I earned my high school diploma. In my youth I was a counselor for Habonim, then joined a young Hadassah group and after my marriage was involved with Lehava chapter of Na'amat.

After a year at Success Business College, I entered the School of Nursing at the Winnipeg General Hospital (now Health Sciences Centre), and progressed from General Duty Nurse to Nursing Supervisor and was Assistant Director of Nursing for 15 years until my retirement in 1983. For 18 years, I worked the night shift while raising five children, managing a household and remaining active in the community.

While doing private duty nursing in 1948 a patient introduced me to his handsome cousin, David Landy. We were married on January 16, 1949. We lived in our family home on Bannerman Avenue. David was the only son of Bella (Lazareck) and Lou Landy. After the death of his father, David was taken to London, England where, at the age of 4, he moved into the Jewish Orphanage where he spent his childhood until he joined the British Army. He fought across Europe throughout World War II and then returned to Winnipeg.

Along with art and reading, David loved photography. He was able to turn his passion to a successful career as the official photographer for the Manitoba Government, a position he held for 21 years before retiring in 1985. His acclaimed photography included the Royal Winnipeg Ballet and Rainbow Stage. Every summer for over 30 years, he volunteered at the Winnipeg Folk Festival photographing artists, volunteers and attendees capturing the performances and the deep sense of community unique to this special event. Many of his images are part of the Manitoba Archive collection.

On March 5, 2005, David passed away shortly before his 84th birthday, and shortly after our 56th anniversary. A tribute to David, in the Folk Festival Program Book 2005, includes "David will always be remembered for his great patience, generosity of spirit, and the wonderful smile that would light up his face when you asked him, "Hey David, did you get some good shots?'"

David was always active in his community; he began volunteering with the Parents Association at Luxton School. He helped establish the Luxton Community Centre and then the St. Johns Community Centre when we had five children. Our family has grown to include nine grandchildren and one great-grandchild.

Laurence (1950) , a graduate of the University of Guelph and teaches at Seneca College, and his wife Nora Spinks, live in North York, Ontario. They have two children — Adam and Alicia.

Robert (1954), a graduate of Ryerson College in film and photography, is a self-employed film editor, lives in West Vancouver, BC. is married to Rhonda (Fleisher). They have two children, Ethan and Lily.

Mark (1955), a graduate from Dalhousie in Speech Pathology, serves as program director of the Grey Bruce Health Services in Owen Sound, Ontario, and his wife, Jennifer Logie have two sons, Joshua and David.

Martin (1958) is a graduate of Southern Alberta Institute of Technology, after many years in Calgary working as an event manager and Pyrotechnician, now lives in the North End of Winnipeg working in community development.

As part of my commitment to the Jewish Foundation of Manitoba and the Jewish community of Winnipeg my sisters and I have established the Joseph Freiden, Scholarship for Yiddish studies in honour of our father, his legacy and his commitment to community. It was said in his eulogy, "Many people work for a cause; many people may sacrifice for a cause. His whole life was a cause; he devoted everything in his life to his family, his community, for Yiddishkeit."