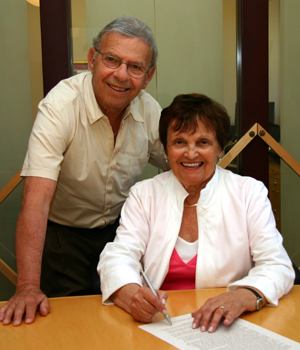 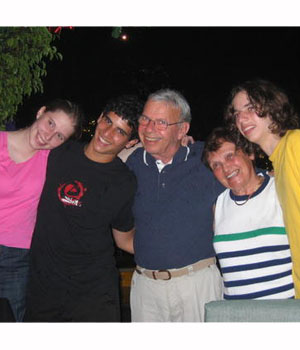 The Weriers with their grandchildren 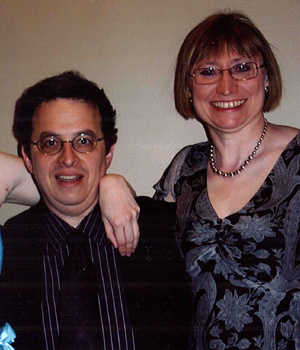 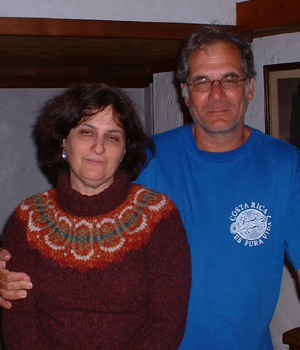 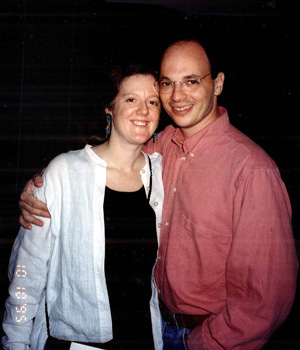 Lawrence Werier could not possibly have imagined the repercussions when he impishly pulled one of Eddy Rubinfield's pigtails on a summer day at Winnipeg Beach back in 1946. But that one impulsive gesture introduced Lawrence to the love of his life and 60 years later, 58 of them as husband and wife, he and Eddy are still holding hands.

At the time that they met Lawrence was just out of the army and Eddy had just finished high school. He was considering options for his future, and she was working as a secretary at Buffalo Cap. University had not been an option that her family could afford.

Eddy (Ettie) had been born in Poland in1928, immigrating to Canada three years later with her mother Annie (Mandell) and older sister Sherry. Her father Max had arrived in Winnipeg two years earlier and was working as a furrier at J.H. Hecht. The family, which expanded to include two more children, Jack and Naomi, first settled on Manitoba Avenue. Eventually they moved to Alfred and Parr, where they lived behind the grocery store that Annie and Max ran.

Both of Eddy's parents were very hard working, but still there was little money for extras. Eddy and her sister shared a bicycle, and if they each received a dime to go to a movie they considered themselves extremely lucky. In the summers Eddy enjoyed outings to Winnipeg Beach, although traveling in the back of her uncle's truck always gave her motion sickness. Shy and small for her age, she graduated from the Talmud Torah, which she walked to and from alone every day, and also attended William Whyte and St. John's Tech schools.

Lawrence too graduated from St. John's high school, after attending Champlain, Machray and Peretz Shul for one year. By the time he and Eddy married in 1949 he was working in his father's wholesale tobacco and confectionary business, Goldin and Company, for $40 a week. His father, Alex, had emigrated with his parents Joseph and Mary from Odessa in the early 1900s. Joseph was the founder of a clearance wholesale J. Werier and Company. Lawrence's mother, Ada (Broder), was born in Scotland. When her mother died in childbirth, Ada and her youngest sister ended up in Montreal. Her six other siblings ended up in California. Ada began working in the mail order department of Eaton's, and met Alex when she traveled to Winnipeg for a wedding.

Lawrence and his sisters, Sondra (Rice) and Mona (Liebling), grew up on Flora, Burrows, Church and O'Meara. He occasionally encountered anti-Semitism, and recalls one particularly bad beating at the hands of some neighbourhood kids. He trained as a gymnast, acted with the Winnipeg Little Theatre, and was a founding member of the Triple Es club at the Y.

After high school Lawrence enrolled in pre med classes at the University of Manitoba, and then enlisted in the army with three of his friends. His parents were both proud and disappointed with his decision. During the war he was stationed at Camp Borden, Ontario, and afterwards returned to university for a few months. He then went into the bubble gum distribution business, which enjoyed short lived success, before going to work at Goldin. He convinced his father to buy out his grandfather, and soon afterwards bought out his father. Lawrence continues to work today and still travels to Asia for buying trips, often joined by Eddy.

Eddy and Lawrence recently celebrated Lawrence's 80th birthday with a trip to Costa Rica with all of their children and grandchildren. Their oldest son Kerry Shale and his wife Suzanne live in London, England where he works as an actor. Their son Cliff, an English professor, lives in Calgary with his wife Sabrina and children Cynthia and Alex, and their daughter Jodie, a judge, lives in Vancouver with her husband Michael and son Koby.

With all their children and grandchildren living away from Winnipeg, Eddy has become expert on filling her time. She took tennis up at the age of 50 and continues to play it and bridge several times a week. Lawrence too is an avid card and tennis player. In fact he has been playing tennis for 72 years.

Eddy and Lawrence are proud of the Winnipeg Jewish community's achievements and grateful for the support they have received from it over the years. They have chosen to participate in the Endowment Book of Life program as a way of giving back.