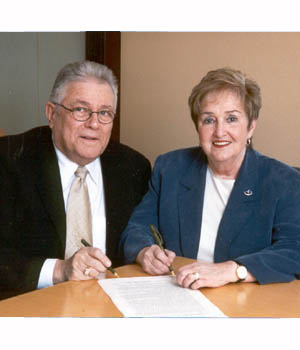 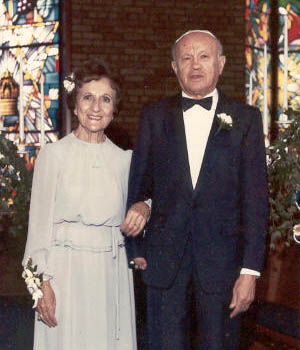 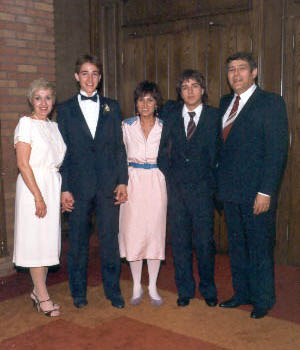 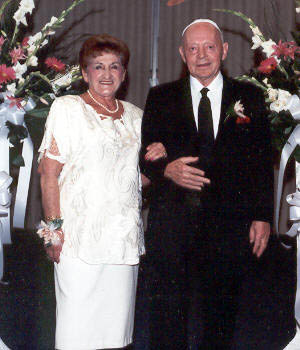 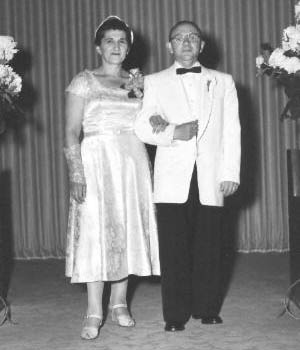 Earl Pitch met Sylvia (Tsipie) Kemel in grade ten at St. John's Tech. Together they have woven a life story that emphasizes the importance of family. In order to understand what they both brought to the relationship it is important to know their backgrounds.

William H. Pitch and his wife Molly (Horn), Earl's parents started married life as rural merchants in Roland, Morden and Pilot Mound, Manitoba. Earl is quick to acknowledge that in the best year this multi-store operator cleared $232 on sales of $28,000. In 1944 Willie, Molly, Earl and sister Sheila moved to Winnipeg and opened Globe Garments - a pant factory. Willie sold out in 1962 and moved into a career in real estate. Earl describes his father as a no nonsense type of individual who knew what he liked and what was important. Earl recalls the three lunches each week with his father at the same three restaurants eating the same three meals, that's what he liked therefore there was no reason to change, Willie was a staunch Zionist. Earl has adopted his father's ardent support of Israel. Molly was generous to a fault for others but frugal for her own needs. Molly lost most of her family in the Holocaust. When Molly, who doted on her husband, had a stroke that confined her to the Sharon Home for thirteen years William had trouble accepting that fate and Earl feels that his father died of a broken heart.

Earl also remembers the quality time that he spent with his Zaida Chaim, who took him for walks and taught him how to roll and then smoke cigarettes. Also the wonderful memories of coming into Winnipeg from Roland to spend Rosh Hashanah and Yom Kippur with family at the original Rosh Pina located at Henry and Martha.

Gordon Kemel was at the University of Manitoba during the depression taking chartered accountancy. Because of finances he was unable to complete the course. When Gordon married his wife Lily (Bober) he became a "bookkeeper". Sylvia (Tsipie) Kemel was the eldest of three daughters (Beverly[Briney], & Sandra). She feels extremely fortunate that she had the luxury of having both sets of grandparents to share her early years. One Zaida, Aaron Kemel, was a junk dealer on Schultz Street, while the other Moishe Bober was a chazzan turned peddler on Pritchard Avenue. When Gordon married Lily they lived in the Bober home. Tsipie enjoyed her grandparents' company so much that even when her parents moved closer to Peretz School, which she attended, Tsipie still remained with her Baba and Zaida for several months. She has wonderful memories of going to synagogue on McGregor with her Zaida Moishe, and of the interesting guests her grandparents entertained weekly on Shabbat. They weaved wonderful stories and had stimulating discussions.

It was public school, St. John's Tech that brought Earl Pitch and Sylvia Kemel into each other's world. A short seven-year courtship led to marriage. By then Sylvia R.N. and Earl C.A. started to raise their three children, Randy, Allen and Howard. Their life together was not one of simplicity or tranquility. Earl was in a number of C.A. partnerships while at the same time he invested in five nursing homes in California. In 1968 he moved with his family to Beverly Hills, California, taking over the day to day operation, with Tsipie's assistance, of the nursing homes. In 1976 he sold out his interest. After a stint in the entertainment business, which his children have kept a hand in, family responsibilities pulled the Pitch family back to Winnipeg in 1980.

Both Earl and Sylvia share a strong sense of duty towards family. Earl wanted to assist his parents, as they both became more dependent. Sylvia's father died young in 1963 and Lily married Jacob Kozak in 1973. Sylvia wanted to have the strong family connection with her mother and sisters, and her aunt Fanny Yarman (Gordon's sister).

Earl and Sylvia are thankful that all of their children and grandchildren (Sophie Reeves, William, Geoffrey & Ariel Pitch) are now living in Winnipeg. They express concern for the shrinkage in the Jewish community but feel that the Asper Campus is an opportunity to see some revitalization in our community. Sylvia is proud of her work as a nurse and some of the medical studies that she was involved in. Earl is a self-proclaimed workaholic, who upon his return to Winnipeg had many opportunities that he undertook.

When asked how they would like to be remembered they said "considerate of others, dedicated to family, community and the State of Israel".