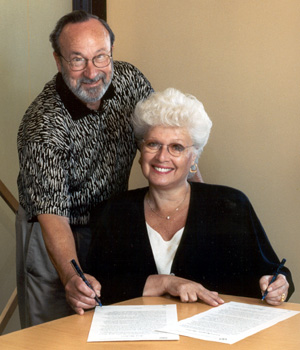 I was born in Winnipeg on February 23, 1930 and grew up in the Elmwood and East Kildonan area. I was the youngest of six siblings: Ethel Shieff, who has passed away, Eva Cristall of Winnipeg, Joe (in California) who served in the Second World War (RCAF) and was awarded the Distinguished Flying Cross, Sid, also in California, who also served in the Second World War, and Betty Dobbs who lives in Toronto.

My father, Benjamin Hechter, came to Canada from Romania in 1903 at the age of 12, and settled in Winnipegosis. There he helped his brother Frank Hechter run a general store. During the First World War when Frank was overseas, Dad ran the store alone. My mother, Rose Studnitz, emigrated from Bessarabia in 1913 and attended Aberdeen school. She met Benjamin through his sister Molly and they married in 1915. The young couple lived in Winnipegosis where their first two children were born, then moved to Winnipeg in 1922. Here they opened a grocery store on Montrose (now Larson) Avenue and Watt Street in Elmwood, and had four more children. In 1926 they installed a gas pump in front of the store, and then established Radio Oil Refinery in Morse Place.

I received my elementary education at Glenwood School, then attended Prince Edward School for junior high and Lord Wolsley for high school. I was a member of the Orioles club at the YMHA and attended B'nai B'rith camp in the summers. When we finished high school, my brother Sid and I managed Campbell Bowling Alley, which our father had recently purchased. But after four years in business, I decided to try university. I subsequently completed Bachelor of Science and a Doctor of Dental Surgery degrees, graduating in 1960. I then practiced dentistry in Winnipeg for 38 years.

I married Gail Margolis in 1963 and together we had three children, a daughter Cheryl born in 1965 and twin sons, Benjamin and Joel, born in 1971.

I have served on the Board of the Manitoba Dental Association and of the Winnipeg Dental Society, and served as President of both organizations. I have been a member of B'nai B'rith Maple Leaf Lodge, Menorah Lodge of the Masonic Temple, and Rosh Pina Synagogue.

As I have always identified strongly with the Jewish community, I am concerned by the fact that our biggest export has been our young people who seem to think they need to go elsewhere to find opportunities. I worry that the philosophy of freedom and open-mindedness that we so proudly instilled in our children may ultimately harm us more than it helps. As this community gradually loses its young people, it is essential that we provide for those of us who will remain. It is also essential that we encourage and help those young people still in the community to remain in Winnipeg, in order to assure the community's future viability.