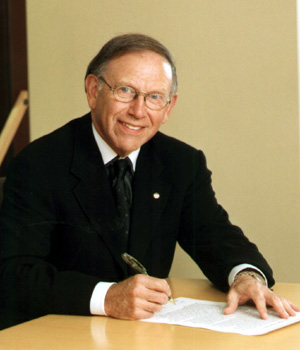 I was born in Winnipeg, the first of 3 sons of Harry and Anne (Wiener) Bernstein. My parents were hard working people who spent their lives working in the grocery business from early morning until late at night. Because we lived behind the store, the entire family was involved in working in the business - often to the exclusion of being with friends or playing in the schoolyard. After each day at Luxton elementary and junior high school, I attended Talmud Torah classes at the Rosh Pina Synagogue.

During my years at St. John's High School, I was a member of the YMHA (The Rams) and became a member of Zeta Beta Tau Fraternity while attending the University of Manitoba. I then attended the University of Toronto where I graduated from the Faculty of Dentistry in 1961. I continued my education and completed a postgraduate program and attained an Orthodontic degree in 1964. The same year, I returned to Winnipeg and opened my orthodontic practice.

Over the years I have been associated with many charitable organizations in the Jewish community and in the Winnipeg Community at large. I have served as past president of the Canadian Association of Orthodontists, the Winnipeg Dental Society and the Kiwanis Club of Winnipeg. For many years, I also served as Chairman of the Winnipeg Israel Bond committee and was on the founding board of the Winnipeg Jewish Theatre.

I married Eydie Bloom and we have one son, Chad. Our daughter Jodi Z"L passed away at the age of 11 years in 1981.

For many years, my hobby has been entertaining and singing - having sung in many shows for medical, charitable groups, as well as at the Shaarey Zedek Synagogue. In 1995, I joined the Barbershop Harmony Society and have been an active participant singing and emceeing many of their shows. This interest in the performing arts has led to a passion for maintaining Jewish culture in our city. My wish for the future is that Jewish community institutions such as the Winnipeg Jewish Theatre and the Hebrew Schools remain viable and continue to be a positive influence on our Jewish heritage. By keeping these institutions strong, the Jewish Community of Winnipeg will remain, as it has often been called, "the Jerusalem of Canada".