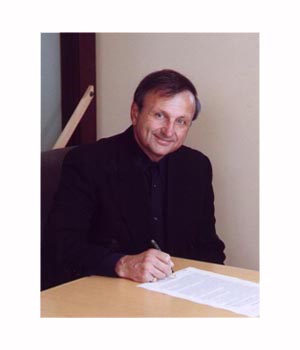 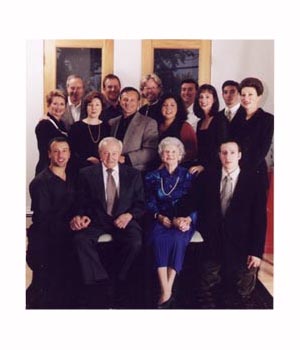 In 1912 Itzhok Samsovitch emigrated from Russia. When Canadian officials asked his name, he misunderstood and stated the name of his sponsoring family, "Helper". He later married the daughter of that family, Fanny, and thus I carry my grandmother's name. My grandfather was a tailor and although the family moved several times, home was Thunder Bay, Ontario. The Helpers had four children, my father Mendy (born May 24, 1913), Nathan, Kaye (Zel Lefkofsky), and Claire (Leon Segal). My Baba passed away in 1961, my Zaida in 1966.

As a young man, my father was very active in sports and during the 1932 Olympic trials was one place short of representing Canada as a runner. He found work in the hotel business, operating hotels for the Hurtig family. In 1939 he joined the Air Force and served as a flight lieutenant, stationed in Canada. That same year, on September 24, he married my mother, Yettie Orenstein.

The matriarch of my mother's family was Mariasa Orenstein, who came from Romania in 1910 and passed away in Thunder Bay in 1942 at the age of 103. My mother was born on September 14, 1915, the daughter of Rachel and Abraham Orenstein. She was the youngest of six children: Ezak, Ida (Jack Cooper), Fred, Mel, and Joe. After my grandfather's departure from the family, Ezak left school at age 15 to support the family, operating a series of clothing stores and eventually settling in Vancouver, B.C.

I was born on August 14, 1942 and have two sisters, Barbara (1947) and Margo (1951). My fondest memory of my teenage years was my involvement with B'nai Brith Camp, where I attended one year at Sandy Hook, and then both as a camper and staff member at Towne Island. Many years later I was proud to serve as Chair of the B'nai Brith Camp Board.

I left Thunder Bay in 1960 to attend the University of Detroit to take an undergraduate degree in science and to play football. The football career "fumbled", and with the emergence of the "Diefenbuck" I returned to Canada and continued my studies at the University of Manitoba. I completed my Science Degree and went on to graduate with a gold medal from the Faculty of Dentistry in 1967. During my second year of dentistry I met Bonnie Zinman (daughter of Pauline and Sam Zinman) and we married on July 28, 1966. Bonnie had graduated with a gold medal from the Faculty of Law that spring, and much ado was made of this husband and wife "gold medal team".

I chose to practice in Winnipeg and in June 1967 opened an office in the Medical Arts Building. At that time, career options were limited for female lawyers, but great credit should go to my wife who went on to become a provincial court judge (1978), the first woman appointed as a judge in the Court of Queen's Bench (1983), and the first woman to be appointed a Justice in the Manitoba Court of Appeal (1989).

I am also proud of our three children. Jeffrey, born on February 1, 1969 inherited his Zaida's athletic skills and played four years of golf at the University of Wisconsin on scholarship. In 1987, he won the Junior Provincial Golf Title, and has also represented Manitoba five times at the Canadian team championships. He also won silver medals for individual and team play at the Maccabiah games in 1989. He earned a Business degree from the University of Wisconsin, and a Law degree from the University of Western Ontario, and now practices law in Calgary. Our daughter Cara, was born on July 23, 1970. She has earned an Arts degree at McGill University and a Law degree from the University of Minnesota, graduating in 1996, where she made Law Review. She married Herb Cohn, originally from Barraquilla, Columbia, on May 23, 1999. He is a Chartered Accountant, and they reside in Minneapolis, Minnesota. Steven was born on July 17, 1975. He graduated with a Bachelor of Science at the University of Manitoba in 1996, and graduates from medicine at the U of M in 2001.

As well as serving on various committees in my professional life, I have been happy to serve the community in such capacities as Chair of the Youth Aliyah dinner, Chairman of Hosts of the JNF Negev Dinner, and Chair of the Multiple Appeals Commission. Canvassing for the CJA and the YMHA Sports Dinner, and my involvement with the Maple Leaf Curling Club, the Glendale Golf & Country Club, and the Winnipeg Squash & Racquet Club have given me great enjoyment. Currently, I serve on the International Board and as Western Canadian President of Technion University.

I came from a family of very limited resources, and through the years I have been fortunate to benefit from the generosity of others. I am grateful for those who provided institutions such as B.B. Camp and Glendale Golf Club. I am also indebted to those who gave of their time and efforts to pave the way for an entry into facets of society that previously were not available to our people. My wife and I have been blessed in our professional careers and I hope that through ongoing community involvement, and through our financial commitments, we are able to help future generations enjoy the richness of being part of, and the resources to improve upon, the world around them.