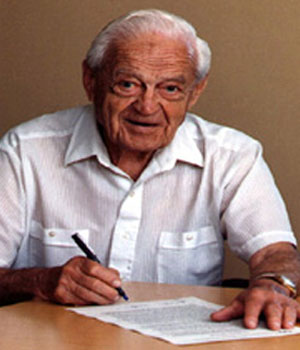 My father, Yehudah Leib Voolach, was born in Rovno, Russia, the oldest of 6 brothers and 2 sisters. In order to avoid service under the Czar, he accepted an offer to come to Canada and work for the C.P.R. which was building the transcontinental railroad. He arrived in Winnipeg about 1890 where the immigration officer translated his name to Wolch. He worked hard and saved sufficient money to send for his wife, Ronia, and eventually the rest of the family. My sister, Sarah, was born in 1899, my older brother Jacob (Daidie) arrived in 1901 and Sam in 1903. I was born in 1908.

I attended Norquay and St. John's schools, the University of Alberta, and the University of Pennsylvania, where I graduated with a Doctorate in Dental Surgery in 1932. I first accepted an offer to do dentistry for the miners in Northern Manitoba, then purchased some second-hand equipment and opened an office at Ellice and Sherbrook. In 1946, I formed a partnership with Harvey Allen and later Sam Borden joined us. When I chose to specialize in Endodontics (root canal therapy), I opened an office downtown at 203 Edmonton Street and continued there until my retirement in 1987.

I married Betty Kaplan on July 16, 1935. (She graduated from Sioux City High School, as did my favorite columnists, Anne Landers and "Dear Abby".) Our first daughter, Rona, was born in 1936 and Judy followed in 1938. Rona married Ralph Brown, a New York lawyer, and they have three children (the oldest, Alex, married on March 27th, 1999). She is an educational consultant with a very busy practice in Chicago. Judy married Dan Schaffer, a law professor in Boston, and had one son, Noah. Sadly, she became a victim of ovarian cancer and died in 1994. A memorial scholarship was established in her memory at the Simmons Social Work School in Boston, where she attended. Memorial plaques have been placed for both her and Betty, who died in her sleep on March 16, 1998, at the Rosh Pina Synagogue and the Asper Jewish Community Campus.

Betty and I enjoyed travelling and visited places such as Israel, Peru, England, France, Italy, and Australia. We were in Russia in 1972 when Paul Henderson scored that sensational goal to win the Canadian hockey team the world championship!

I hope to be remembered as a loving father, a compassionate dentist, an unselfish philanthropist, and a proud member of the Jewish faith. I trust my offspring will be active participants in Judaism. I am confident that Winnipeg's Jewish community will remain strong with the help of the Asper Jewish Community Campus, and Jewish organizations and synagogues.