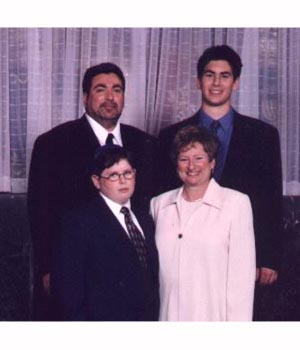 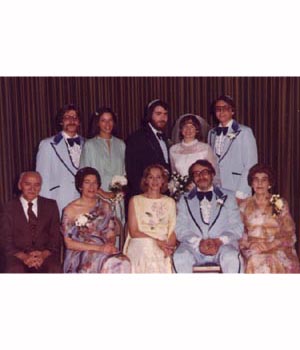 IAN AND ELAINE'S WEDDING DAY TOGETHER WITH THE GOLDSTINE FAMILY... 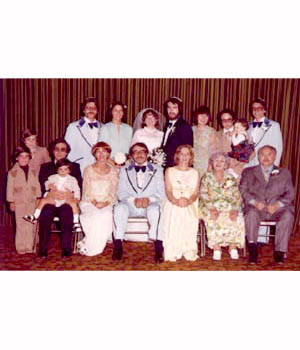 ...AND THE MARGOLIS FAMILY

My great-grandfather, Max Goldstine, was a Quartermaster in the N.W.M.P. during the Riel Rebellion in 1869. He and my great-grandmother, Jennie Goldstine (Cohen), were founding members of the Shaarey Zedek Synagogue. They began the Manitoba Clothing Company (est. 1877, Inc. 1887) on Main Street, a family business for three generations. My Grandfather, Irvin Joseph Goldstine (for whom I am named) was born in Winnipeg. His wife (my Grandmother) Fanny Goldstine (Robinson) was born in Stratford, Ontario. On March 15, 1928 my father, Allen David Goldstine was born. He has one sister, Enid (Marantz).

My mother, Jenny Goldstine (Margolis) was born in Kreminitz, Poland on September 25, 1929 and came to Winnipeg a few months later with her parents, Manya (Fishman) and Aaron Margolis, and an older brother, Boris. Two siblings were born here, David and Phyllis (Slayen). The Margolis family operated a grocery store at Euclid and Barber, and later at Atlantic and Aikens. After my Zaida passed away, the store was sold and my Baba bought a house on Coralberry, a place I remember fondly for the family dinners (Seders, etc.) in the crowded kitchen. I also remember fondly the Sunday afternoon adventures with my Uncle Boris.

My parents were married in May 1950 in Regina, because Winnipeg was experiencing "The Flood". My father worked in the family business until it was sold in 1956, then took his Chartered Accountancy and was in public practice for a number of years, operating from his office near Selkirk and Main. He later worked as the Associate Comptroller at the University of Manitoba, and then for the Provincial Government. My mother trained as a teacher, and enjoyed being a substitute teacher in Winnipeg #1 School Division. My brother Marc was born in 1952, I in 1955, and Lawrence in 1962. When I was seven, our family spent a holiday in Gimli and my parents noticed an old cottage for sale, which they bought. It became our summer home - my favorite place in the world. A new cottage was built on the property in 1979 and it has since become my parents' retirement home.

As my family moved eight times during my childhood, I attended a number of schools, graduating from Garden City Collegiate in 1973. I studied Medicine at the University of Manitoba and graduated in 1979. After doing some extra training in Obstetrics and then working in Emergency and Intensive Care for a couple of years, I chose to work as a Family Practitioner at the Assiniboine Clinic, where I stayed from 1982 to 1995. During this time I earned my designation with the Canadian College of Family Practice (C.C.F.P.). From February 1995 until October 1999 I was employed with University Health Services, and since that time have served as a Medical Advisor in the Pain Management Unit of the Workers Compensation Board of Manitoba. As well, since the spring of 1999 I have served as a Medical Consultant to the College of Physicians and Surgeons of Manitoba, being involved in the Manitoba Quality Assurance Program, the Manitoba Prescribing Practices Program, and the Transfusion Medicine Working Group.

In 1977, I married Elaine Raber and we have two children, Daniel, born in 1982, and Jason, born in 1985. Jason is presently attending the Gray Academy of Jewish Education and Daniel has just graduated grade twelve from J.W.C. and will be attending university in the fall.

Jewish life has always been important to me, and I have been involved in community service since 1988, when I served on the Board of the Professional and Business Division of the Winnipeg Chapter of the Canadian Friends of the Hebrew University. In 1994, I was Co-Chair of the Doctors' Division of CJA, and have served on the Board of the Jewish Federation of Winnipeg since 1995 where I have held the positions of Treasurer, Vice-President of Budget and Allocations, and most recently Senior Vice-President of the Federation. In the spring of 1998 I took part in the Strategic Planning Committee for The Jewish Foundation of Manitoba, and currently sit on the Foundation Board.

Perhaps my most labour intensive, passionate, volunteer experience has been with the Manitoba Medical Association. Upon becoming President of the MMA in the spring of 1993, I became intimately involved with the negotiations for a new contract between the physicians of Manitoba and the Provincial Government. This was an exhilarating, frustrating, educational experience and, after approximately 500 hours of fervid negotiations, a five-year contract worth approximately $1.2 billion was agreed upon in the spring of 1994.

Practicing medicine, as well as my opportunities to travel and to meet many people from various backgrounds, has helped me to appreciate what connects people to one another. I have observed that needs in the individual are a microcosm of needs in the community and I have made it my goal to try and help at whatever level is available to me. People need to feel involved and included, and in Winnipeg's Jewish community, the Campus facility provides a wonderful opportunity to accomplish this and thereby ensure that not only will the individual thrive, but indeed, the entire community will flourish.