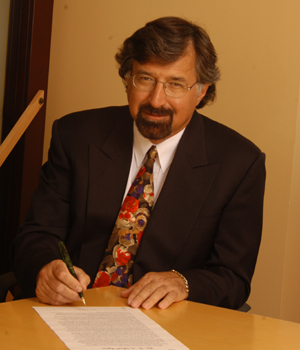 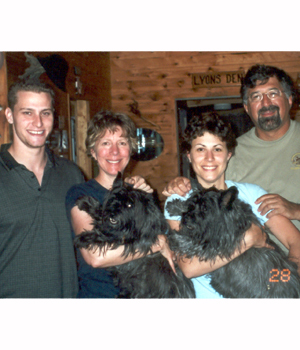 The Lyons Family, L to R: Sami, Harriet (with Betsy), Mara (with Bubby), and Ted 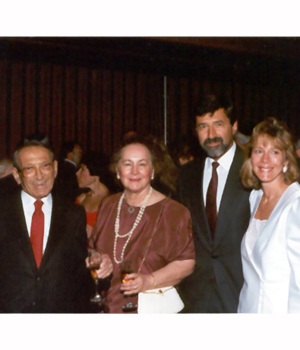 Ted and Harriet Lyons with Ted's parents, Ruvin and Edith 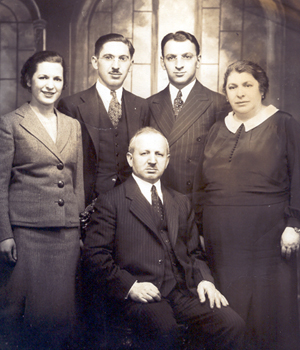 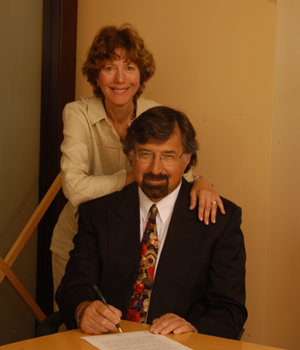 "The effects of parenting are never truly known."

This is how Edward (Teddy) Lyons began speaking about his life and confirming that "he is who he is" because of the parenting that he received. The motivation to become a signer in the Endowment Book of Life is partly driven on the desire to commemorate his parents' memory.

Ruvin and Edith, Teddy's parents, were special people. Ruvin arrived in Canada as a three-year-old from the Ukraine. As the family began to establish themselves, he was encouraged to obtain a professional education. Ruvin entered the University of Manitoba medical school with no difficulty, it was the exiting that proved to be a problem. This was the time that quotas on Jewish doctors were the order of the day, so with the financial support of his family, who now operated Buffalo Cap, Ruvin moved to England where he took his medical training in obstetrics.

Returning to Winnipeg in 1936 he established his practice at the Boyd Building, met the girl across the street, Edith Hecht, married her in 1940 and was called up for military service in 1941. Camp Aldershot in Kentville, just outside of Halifax, became home. Following Ruvin out east, Edith set up an apartment to be close to her husband and in 1943 Teddy was born in Halifax. The apartment was open to many of the young Winnipeg Jewish boys set to board ship for duty in Europe. After the war the Lyons family returned to Winnipeg to begin family life outside of the military environment. Teddy's reflections on his parents speak of "warmth, kindness, artistry and reverence" especially between Ruvin and his patients. Not all but certainly most of the Winnipeg Jewish babies were delivered by Dr. Ruvin Lyons. Ruvin was typical of physicians of that era, their profession was the commitment that their lives revolved around.

It was in this environment that Teddy and his sister Ellen (Goldstein) grew up. Home was on Niagara Street, so Teddy attended the south-end public day school system and "after 4" Hebrew classes at the Shaarey Zedek. From the YMHA, to AZA's Toppers and the Sigma Alpha Mu fraternity, Teddy Lyons was very much involved in the Jewish community.

Not due to his father's encouragement but more because of time spent watching his father, Teddy decided to enter medical school, graduating in 1973. Although much of what Teddy has done has followed in his father's footsteps he recalls only one piece of fatherly advice, "to take a summer research position", which led him to a specialty in radiology focusing on the use of ultrasound for diagnosis. Now some thirty years later Ted has presented research papers and lectured extensively throughout the world. Attached to the Health Sciences Centre, he has also established and served as the Head of Ultra Sound at both the St. Boniface and Victoria Hospitals. He is most proud of his extended tenure as Head of the Department of Ultra Sound and Radiology at the University of Manitoba and the Health Sciences Centre. Teddy's career has afforded him the opportunity to work with and represent international organizations, American College of Radiology, American Institute of Ultrasound, Society of Radiologists in Ultrasound, Canadian Association of Radiology to name a few, while working closely with patients to solve clinical problems, discuss results and help colleagues as part of a health care team.

Teddy however is much more than a one dimensional individual. Community has been a large part of his life. Teddy has always felt that the Shaarey Zedek Synagogue is an important Winnipeg institution and has been involved all the way to the position of President, a position held by Ruvin 30 years earlier. He has also focused his community energies towards the Jewish Federation of Winnipeg where he serves in the capacity of Vice-president of Planning. He views the Winnipeg Jewish Community as unique in North America where the community roots are so deep that it is a community with one degree of separation.

Married to Harriet (Jacob) they have two children, Mara and Sami, it is Teddy's and Harriet's hope that their children remain in Winnipeg. Teddy believes that life in Winnipeg is special and his involvement in the Endowment Book of Life program is to entrench the family history so that it is not forgotten and it is also important to leave a strong community both financially and spiritually for the generations to follow.