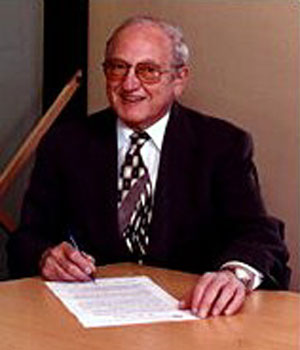 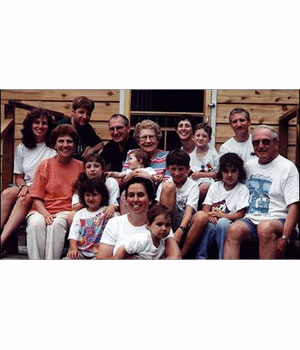 The Goldberg Family at Gimli, summer of 1998

My parents, Louis and Ethel (Steinberg) Goldberg and their parents, came to Canada from Byalistock (maternal side) in 1927, and from Koritz (paternal side) in 1928. I was born in Selkirk where my parents operated a barber shop and general store on Main Street.

When I was 5 years old we moved to Winnipeg, and I grew up on Selkirk Avenue with my brother (now living in Calgary), and my sister (Ottawa), attended Aberdeen, King Edward & Isaac Newton schools and Talmud Torah night school. As a youth, I belonged to the Y.M.H.A., Young Judea, Sigma Alpha Mu & Alpha Omega fraternities.

Some of my strongest childhood memories related to being Jewish center around my maternal grandparents who were Orthodox but tolerant of liberal views and practices. Saturday nights, after Havdalah, they came to our house (stopping en route at Buchwald's bakery) and we congregated around the kitchen table, eating hot rye bread, baked potatoes and fresh shmaltz herring and conversing in Yiddish, often comparing life here and in the old country. When my grandmother died, my grandfather lived with us and by his example, taught me the real meaning of tzedakah. He was not a man of great means, but every month when he received his $40.00 pension cheque, he purchased eight $5.00 money orders and sent them as donations to Israeli and American organizations/causes.

I am a dentist (graduated from University of Manitoba and University of Toronto) and have been active in my profession's organizations, having served as President of the Manitoba Dental Association, President & Regent of Manitoba Alpha Omega Fraternity, and on the National Dental Examining Board.

I have also served on the Board and Executive of the Rosh Pina Synagogue. I take great pride in the five years I spent as Chairperson for Project Renewal, when our community was twinned with Gan Yavneh (1985-90).

I married Serky Mozersky on August 16, 1959 and we have three children and seven grandchildren: Harold (Alisa Israel) of Boston with Sam, Anna and Jacob, Martin (Sharon Zabitsky) of Toronto with Adina, Tamar and Leora, Elana (Myron Schultz) of Winnipeg with Dafna.

All through my life there have always been Jewish institutions to fulfill my family's needs. I have given them my time because I believe they are important, and should be available to future generations - in their present, modified or new format - to enrich Jewish life in Winnipeg.