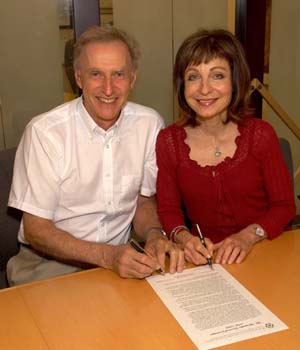 Tannis & Marshall Peikoff sign the story of her father, Alexander Guttman, for the Endowment Book of Life 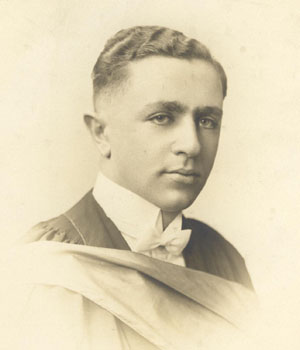 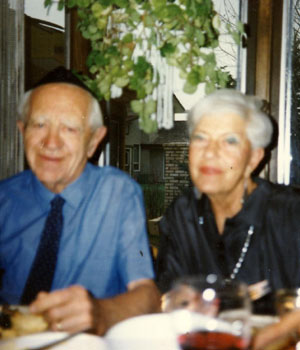 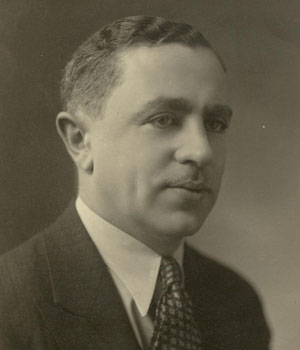 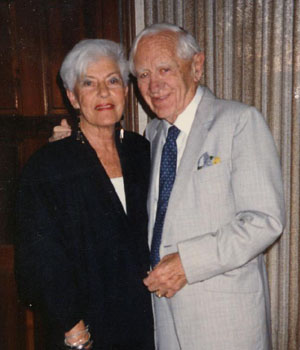 I was born in Glasgow, Scotland on January 23, 1901 to Simon Guttman and Bluma Cohen. My parents were both born in Polanga, a Russian summer beach resort that was home to the family for five centuries. My mother and father moved to Glasgow, and both of them took jobs in an amber factory. On April 9, 1910, my family, which consisted of my parents, my two older brothers Henry and Issy, my sister Sarah, and I, left for Canada. We travelled for ten days in the steerage section of a ship. When we finally arrived, we missed the train going west. This turned out to be a blessing, as we subsequently learned that two coaches of this train had plunged into a river and all of the passengers on those coaches had drowned. On our way to western Canada, we made a stop in Winnipeg. Here, my father noticed that there were many banks, which suggested to him that Winnipeg must be a thriving city. After much discussion, my mother and father decided that this would be a good place to settle. In Winnipeg my father worked as an expressman, transporting baggage by horse and buggy from the Canadian Pacific Railway station, and doing other odd jobs. Interestingly, one of his fellow workers was Samuel Bronfman, who was later to be a founder of Distillers Corporation-Seagrams Ltd.

The first school that my siblings and I attended was Aberdeen School. It was not an easy time for us because the other children made fun of our Scottish accents. As a result I got into fistfights almost every day, much to the dismay of my sister Sarah, who kept trying to break them up. In 1918, my older brothers, Issy and Henry, and I, along with fifteen other charter members, founded the YMHA. The Charter meetings were held in our home at 100 Charles Street for several years before the establishment of an official YMHA headquarters.

I attended high school at St. Johns High School. I went on to the University of Manitoba where I received my medical degree in 1924 and opened my practice soon thereafter. In 1926, to meet the need for an out-patient clinic in north end Winnipeg, I and several others founded the Mount Carmel Clinic, where I worked on and off until 1945. In 1933, I went to Chicago to spend a year working at Cook County Hospital. I then travelled to Budapest, Hungary for additional training.

On a trip to Montreal, I met Janette Gold. I returned to Winnipeg, but I saw her again a short while later when she and her mother made a trip to Winnipeg to visit family. Soon after we said our goodbyes at the train station, I phoned her and told her that I was sending her a box of chocolates and a ticket to return to Winnipeg so that we might become engaged. She accepted and we were married on August 24, 1941 in Montreal. Janette and I had a wonderful life together, filled with dancing, travel, and celebrations of Jewish holidays with our family.

In 1945, together with our newborn daughter, Tannis, we went to Edinburgh so that I could pursue a fellowship in Orthopaedic surgery with the Royal College of Physicians and Surgeons. Our trip over was particularly memorable because Eleanor Roosevelt and a number of individuals who were to later become founding delegates of the United Nations travelled with us.

Our stay was enjoyable despite the hardships experienced after the war. When I returned to Winnipeg, I started my Orthopaedic practice. I was a founding member of the Victoria General Hospital. In 1962, I was elected president of the Royal College of Physicians and Surgeons.

In 1960, Janette and I made our first trip to Israel. From that time on Israel became an important part of our lives. We subsequently bought a villa in Ramat Poleg, where we spent six months of every year.

In 1963, Tannis married Dr. Marshall Peikoff. I became a grandfather when Elana was born in 1966 and again when Heather was born in 1972. I was thrilled to be at Heather's wedding to John Diamond in 1997, where I had the honour of giving the toast to the bride. Three years later I was blessed with a great grandson, Benjamin Diamond. In 1998, at age 97, I gave a lecture to Tannis' sociology class at the University of Manitoba. I told the students in considerable detail what Winnipeg was like in 1910.

For my 100th birthday, I was given a wonderful celebration by my family. I entered the room with bagpipes playing and many of my friends, colleagues, former patients, and of course my family, came to celebrate with me. I was honoured that my nephew Bob Rae, the former premier of Ontario, made a special trip to attend my celebration.

Dr. Alex Guttman passed away on July 4th, 2001. In 2003, Heather gave birth to a second son, Alexander Diamond, named in honour of his late great grandfather. In 2004, Elana married Dr. Jonathan Manson and gave birth to a son, Ryan Manson.