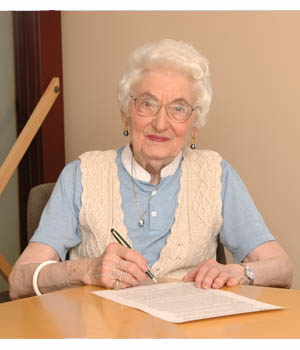 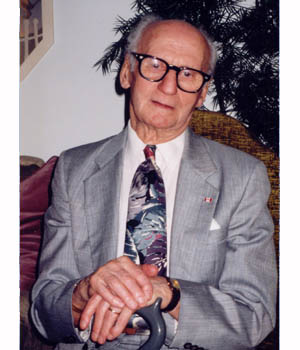 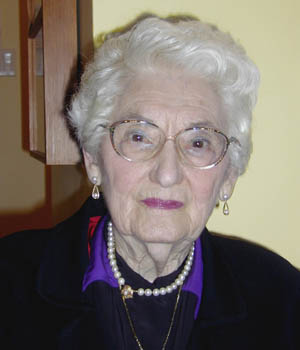 Dorothy Hershfield has been known all her life as "Babe".

Her pioneer parents Lazar and Annie Tuberman were in the grocery business, and moved their family of three girls — Sara, Babe, and Lillian — from Winnipeg, where Babe was born in 1917, to Vita, Manitoba, and then to Neville and Briercrest, both in Saskatchewan. In Neville the family lived above the store, with no running water or electricity, and Briercrest was a town where poverty and loneliness plagued the lone Jewish family. It was in these prairie towns that Babe received her education, and, as a top student with a natural aptitude for numbers, took care of the family accounting. Babe was also very musical, and as a teenager played the piano in the theatre as an accompanist to silent movies.

In 1933, the family returned to Winnipeg. After a stint as an usher at the Rose Theatre on Sargent andArlington, Babe took a job as secretary and bookkeeper at the Winnipeg Jewish Orphanage on Matheson Avenue, a position she held for seven years. After this, she worked for seven years as secretary and accountant at Quality Bed and Spring Manufacturing Company. During this time the Tubermans lived downtown on Qu'Appelle Avenue, and Babe enjoyed watching ball games at Wesley Park near what is now the University of Winnipeg. There, an outstanding athlete, Leible Hershfield, caught her eye. She and Leible were married on October 8, 1939.

Leible was born in Zhitomir, Ukraine in 1909, and came to Winnipeg as a baby with his parents Falik and Sarah and his brothers Harry, Aaron, and Sheppy. He grew up in the north end, attending Aberdeen and St. John's schools. After high school he worked at the Winnipeg Film Exchange, but his keen interest in athletics soon led him to become the Athletic Director at the YMHA, first on Albert Street and later on Hargrave Street. He is perhaps best known for his skills as a softball player, serving as a sensational outfielder (always without a glove!) from the 1920s to the 1950s. In 1952, when his team Branch 141 Ukrainian Legion won the Western Canadian championships, it was Leible's 28th straight season of play. He went on to help found Winnipeg's first 60-plus slo-pitch league, which continues to this day at Kildonan Park. Leible also played soccer, participated in track and field, swam, and involved himself in innumerable athletic events and activities. He volunteered as a gym instructor in local schools and with polio patients undergoing rehabilitation. In 1981, Leible was inducted into the Manitoba Sports Hall of Fame, in 2000 was named "Jewish Athlete of the 20th Century", and in 2002 was one of the inaugural inductees to the Manitoba Softball Hall of Fame. A plaque highlighting Leible's numerous achievements can be found on a wall at the Rady Centre. But accolades alone do not capture Leible's true character: in addition to his liking people and to the affectionate esteem in which he was held, Leible had a marvelous way with children. As adults, great numbers of Winnipeg Jews recall that it was Leible who taught them to swim at the YMHA. A life dedicated to athletics moved Leible to write his book "The Jewish Athlete — A Nostalgic View" published in 1980. Leible died in 1999. To this day Babe proudly wears the ring presented to Leible for his years of commitment to the YMHA and to the adults and children of the community.

Babe and Leible's daughter Susan was born in 1948, and their son Joel in 1956. Susan and her husband Myron Turner are visual artists. Susan has worked at the Sharon Home and at the Jewish Heritage Centre, and Myron was a Professor of English at the University of Manitoba. Joel, an accountant with the Province of Manitoba, and his wife Kathy, an office administrator, have a busy life with their children Matthew, Jordan, and Leah.

In 1968, her children grown, Babe used her considerable energy and became involved with the development of the Jewish Historical Society of Western Canada. For over 20 years, she worked tirelessly as Executive Director to gather, record, preserve, and present the history and the religious and cultural heritage of the Jewish people of western Canada. She gathered archival materials, helped produce exciting exhibits and publications, procured government funding, and, with her vision and fresh ideas, helped the organization flourish.

This experience gave Babe a strong sense of community, one that she feels she missed earlier on by not attending school in Winnipeg. Her volunteerism began as a young girl, when she took it upon herself to deliver meals to the farmhands working in the fields. As an adult she became a dedicated community volunteer. Babe was involved in starting the Colitis and Ileitis Society in Manitoba, delivered Meals on Wheels, campaigned for the CJA, created an archival record of artifacts, documents, and photographs for the Shaarey Zedek Synagogue and for the Simkin Centre of the Sharon Home, served as unofficial "greeter" at many community events, and is a "friendly visitor" to Sharon Home residents. "I love people," she says, "I talk to everyone, whether I know them or not!"

Here at The Jewish Foundation of Manitoba we have been treated to Babe's delicious homemade cookies always delivered with a smile and her trademark wry sense of humour, and we have come to affectionately call her "The Cookie Lady".

Babe can often be seen on "Main Street" at the Asper Jewish Community Campus, chatting with one and all. "It's marvelous here," she smiles. "We have such wonderful activities and events. If I could, I would participate in them all. I am happy to add this brief biography of Leible and myself to the Endowment Book of Life so that I can help ensure the future vitality of the Jewish community which, for us, has been such an integral part of our lives."