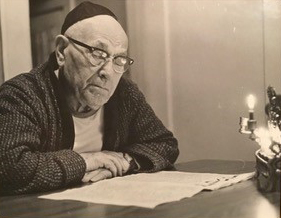 At home, reading the Jewish newspaper late into the night 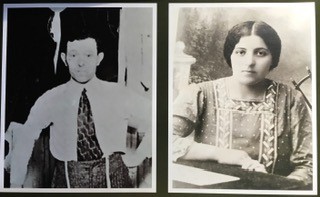 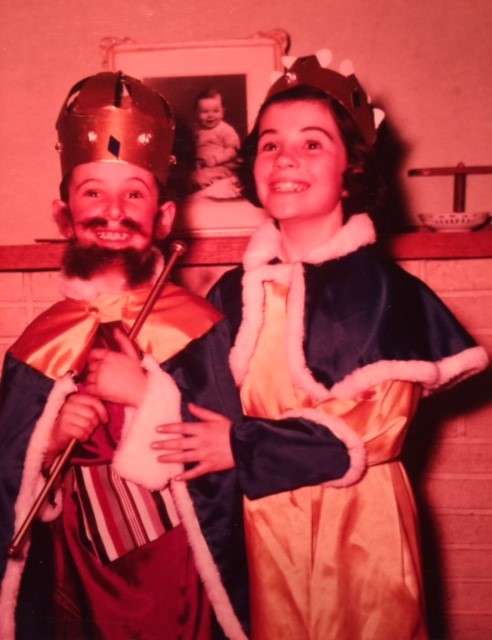 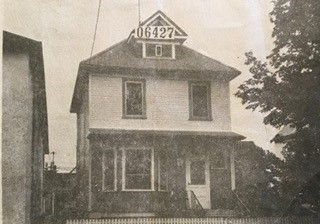 The house at 476 Stella Avenue 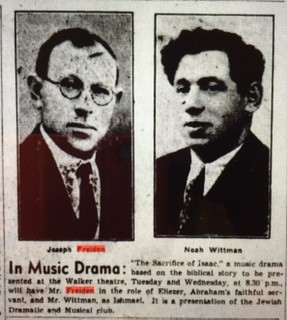 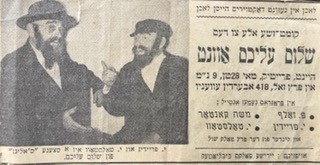 From the Jewish Post, announcing a Sholem Aleichem Evening at the Petertz School on Aberdeen Avenue; Joseph Freiden on the right 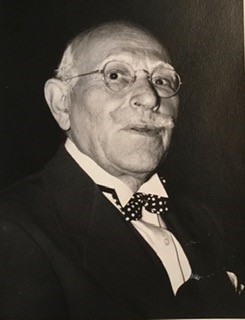 In costume and self-applied make-up for the stage 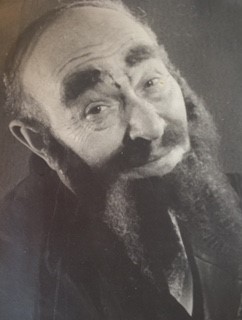 In costume and self-applied make-up for the stage

Joseph Meyer Freiden was born in 1890 in the port of Nikolaev on the Black Sea, not far from Odessa. It was a major centre for Russian Jewry confined to living within the Pale of Settlement in those days.

In 1913 he emigrated to flee the pogroms that were becoming increasingly prevalent and, as a pacifist, to avoid the 25-year Russian military conscription. He travelled with his sister-in-law, Fanny Fordman, leaving behind his wife Rivka (nee Fordman) and Syma, their baby daughter.

Rivka had two uncles in Winnipeg, so Joseph and Fanny came to Canada and stayed with them, finding work in the garment industry. Within a year, they had earned enough money to afford passage for his wife and daughter, his mother-in-law Malka Fordman, and Malka's three other children, Sarah, Saul, and Dorothy, all of whom arrived together in 1914. Like many other Jewish immigrants, they settled in Winnipeg's North End, eventually buying a house on Stella Avenue in which the extended family could live together.

Joseph and Rivka's second daughter, Jennie, was born in 1916, and their third, Edith, was delivered at home in 1920. "Joe of the West End" opened his own tailor shop at 946 Portage Avenue, where his skills and warm, gentle nature earned him a loyal clientele.

Then in December of 1928, Rivka died suddenly of acute appendicitis at the age of 36. Joseph never remarried. Nearly four decades later, on his 75th birthday, he wrote in his Will that his grief was so intense at losing his daughters' "good, quiet and gentle young mother" that he was unable to speak about her to them; for this "weakness" he asked their forgiveness.

He wrote that "nobody likes a sad face and no one is obliged to bear my sorrow,"; so instead of grieving openly, he hid his anguish and immersed himself in Jewish literature. He particularly loved the humanity, wry humour, wit, and wisdom of the Yiddish writers. He became involved in the Yiddish Theatre as an actor, director, and backstage makeup artist. He became an interpreter of Sholem Aleichem stories, accepting countless invitations to "read" them on the radio and to various audiences. He'd be alone on the stage with the book in his lap, but like a true storyteller, he didn't need to glance down.

He didn't want fame or fortune; he would not accept money for his performances or take any credit for what he did. His purpose was only to channel his sadness into making people smile. And that brought him joy.

Within this rich cultural community, and with the help of the family, he raised his three daughters and worked in his tailor shop. He was also devoted to the I.L. Perez School, giving regular Friday night readings. He worked to support the Winnipeg Jewish Library and the Labour Zionist Organization, both of which he served as president. He also belonged to the Canadian Jewish Congress, B'nai Brith, Histadrut, and the Jewish Immigrant Aid Society and worked behind the scenes to establish the Sunday Jewish radio program.

He did all this to pass on this rich cultural heritage to his - and others' - children and children's children. In all his work and personal life, he remained modest and gave unselfishly.

To his 12 grandchildren, who began to appear in the 1940s, he was the loving Zaida who could mesmerize with a story, delight with a bus ride to see the Golden Boy, entertain with a joke, or create fantastic tailored costumes - even applying makeup and beards - for plays and Purim parades. He would also share his love for the Jewish traditions and values based on his own life and behavior with them.

Joseph Meyer died of cancer in 1969 at the age of 79, after attending a granddaughter's wedding in Israel. Even in his final days, he seemed more concerned for others' suffering than for his own.

"He personified both his given names: Joseph (from the word to multiply) - his concern was to do more and more. He did more and gave more than could be expected from anyone. And at the same time, Meyer (to bring light) - brought quiet rays of sunshine into people's lives."

"...... His personality, his warmth, his humour, and insights into the joy of the Jewish spirit brightened and warmed the lives of the multitude who knew him. Indeed his favourite possession is implied in the meaning of Freiden: joy."

"........ He was respected and loved and admired by the entire community. Yet, with great humility and with almost a shyness, he tried to avoid the honours he deserved which the people of this community often tried to bestow upon him....."

His Will was three pages of beautifully handwritten Yiddish; he left it behind for his children and grandchildren to serve "... as a pathfinder for their lives. After all, having lived all my years, have I not learned anything?"

In it, he wrote: "The first and best thing that I would ask .... is that they should always live peacefully between themselves. This is the best and finest matter in a family: helping one another with whatever one can - sometimes even with good advice - to keep friendly and close - not to reckon with petty matters that may sometimes arise in a family. ..... If you should carry a grudge sometimes do not carry it in your heart but talk it out in a friendly manner, because one very often carries a grudge for something (when) the other party is not at all guilty. With goodwill one can always and with everyone live in peace..." (from the legal word-for-word translation by Mr. Nathan Lockshin).

This official translation was commissioned by the lawyer for his estate immediately following his death, long before all the other papers and final balances were completed. However, a copy of it was sent to his children right away, along with (in part) the following cover letter:

"......... In due course you will receive the typewritten copies but I think you might like to see this at the present time. I believe that this is a documentation which should be read by every person both for the morals contained in same, and as a tribute to the type of person your father was.

In 2003 his daughters, Syma Katz (z’l), Jennie Rich (z’l), and Edith Landy, established The Joseph Meyer Freiden Scholarship to supply a bursary for a student of Yiddish at the Gray Academy. Their wish was to keep their father's name and aspirations alive by helping to preserve the language - and its culture - that was so precious to him and to ensure its survival.