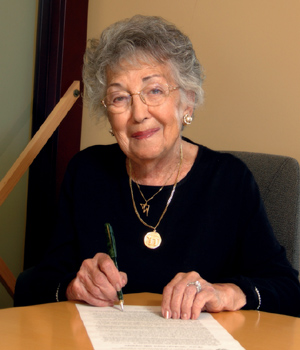 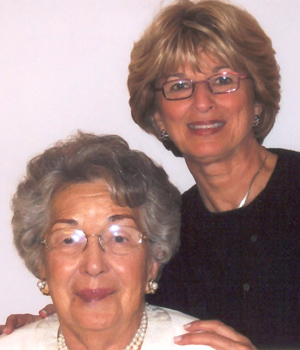 Dorothy and her daughter Terri Erlichman 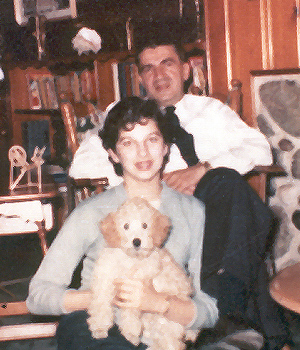 Terri and her father, Dave Yates 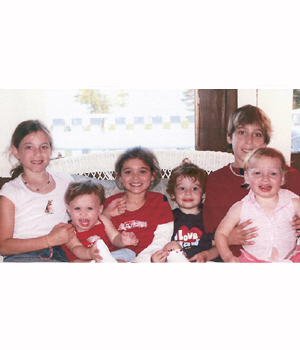 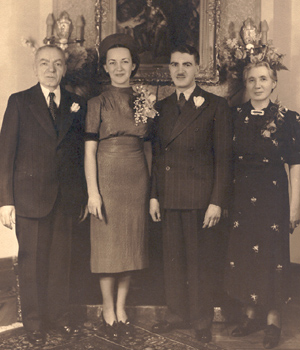 Dorothy and Dave's wedding day, with Dave's parents in Montreal

My father, David, immigrated to Canada from Russia as a child with his parents, Jacob and Effie (Rosenberg) Morgenstern. After his first wife died in the influenza epidemic, my father married Thalma (Hendelman) who had recently arrived in Canada with her parents, Mordechai and Elke Berg. Thalma became a mother to David's three daughters - Sadie, Gertrude and Libby - and with him had three more children — myself, Kenny and Ruthie.

I was born in Winnipeg in 1915. My father was a handsome, strict and very honourable man who earned a comfortable living in the horse-trading and wholesale meat and packing business. My mother was a beautiful woman with a distinct sense of style and self. She was a selfless mother whose only thought was for her family. She died when I was 13 years old, leaving me to care for my younger siblings. Soon after, my father lost his business in the Great Depression, although he soon bounced back opening a grocery store and going into real estate.

While we were very Jewish, we did not reside in the north end where most of the city's Jews lived. We lived on Craig Street in the west end where I attended Wolseley and Gordon Bell Schools. We moved to River Heights and I graduated from Kelvin High School.

After high school, I began working at the Fashion Shop to help support the family. I met my first husband, David Yates, when he came into the store with his hat samples. Dave, as he was affectionately called, was vice-president and a partner with his brother, Ben, in Fashion Headwear, a hat manufacturing company in Montreal. We were married in Montreal in 1937 and we moved to Scotia Street in Winnipeg's north end. I studied Fine Arts at the University of Manitoba.

Dave and I were blessed with the birth of our daughter, Terri, in 1943. We were then further blessed when Terri (Erlichman) gave us three beautiful granddaughters, Ronda (David Erenberg), Shari (Howard Goldberg) and Debra (Daniel Goldman). I now have six beautiful great-grandchildren.

While Dave often traveled for his business, I stayed at home with Terri, always keeping busy with various creative pursuits, including sewing, pottery, ceramics and embroidery. I spent many hours weaving silk threads from the Orient into tallesim that I gave away as gifts or sold to help raise money for various causes. David and I were founders of the Rosh Pina Synagogue and were strong supporters of Israel, which we visited often.

In 1950, Dave and my brother, Ken (Morgen), started a successful ladies' clothing manufacturing business, Fashion Ease, which later became Young Ideas Limited and Panther Pant. Dave retired in 1964, and it was then that we began to spend our winters in Florida.

In 1960, we built a summer home at Loni Beach in Gimli. Never able to sit still for too long, I became involved in the political scene in Loni Beach where I served as an alderwoman for two years and then served as its mayor for another two years. At the cottage, my vegetable and rock garden became well known throughout the area.

Dave passed away suddenly in 1973.

In 1977, I married Gabe Goldberg, a widower who had been our neighbour in Florida. Gabe and I shared 18 wonderful years together. He was a warm and understanding man and a loving and supportive grandfather to my grandchildren. He passed away in 1995.

I know how fortunate I have been in having a long and comfortable life. I have been a partner in two very loving and happy marriages, and have enjoyed a close relationship with my daughter, granddaughters and great-grandchildren.

I would like to be remembered as a parent who passed on to her children the legacy of the importance of family, Judaism and tzedakah.