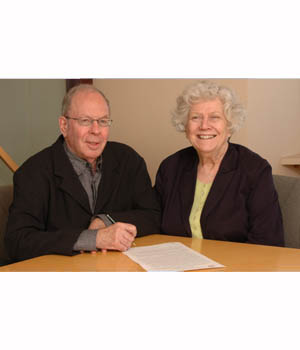 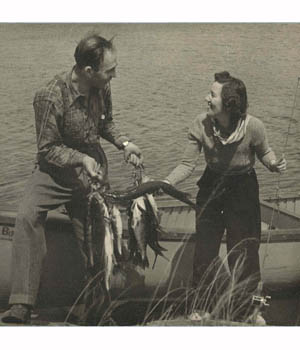 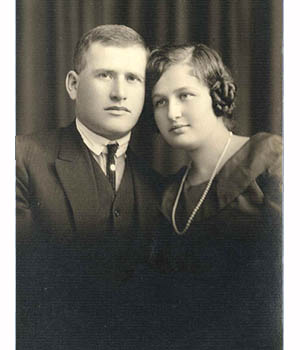 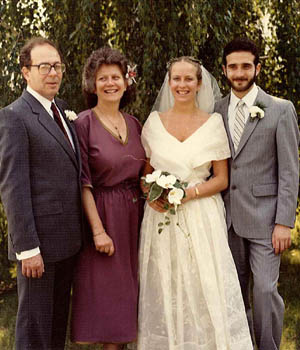 Burton and Doris with their children, Cindy and Jeremy 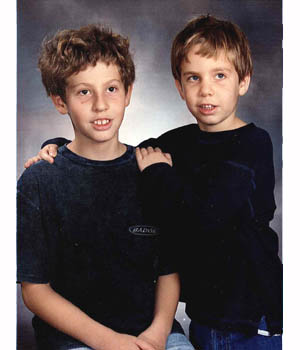 The 50 year marriage of Doris and Burton Bass owes a great deal to a 100 pound bag of plaster of paris. The couple met in 1952 when Doris, then Hillel president at the University of Manitoba, managed to procure the material for Burton late on a Saturday night, just in time for him to meet an arts competition deadline.

Burton was impressed that Doris was able to acquire the necessary supplies at such short notice, and she was impressed that Burton's sculpture, intended as a gag entry, won the competition. They began dating shortly thereafter and married two years later.

Burton was born Arnold Burton in Winnipeg to Sam and Shirley (Dubosar) Bass. Sam and Shirley had met at 16 when Shirley accompanied her widowed mother from her hometown in Connecticut to Winnipeg for a wedding. Shirley returned home but Sam soon showed up on her doorstep and proposed. They traveled to Indiana so that they could be legally wed.

Sam's orthodox father, Kalman, was a blacksmith who left Russia as a young man. In Winnipeg he was hired by the CPR. After two years 'working on the railway' he established a blacksmith shop and grist mill in Cartwright, Manitoba, becoming one of the earliest settlers in Southwestern Manitoba. Today his blacksmith shop is a designated Manitoba heritage site.

In 1905 Kalman returned to Winnipeg and founded the Derby Garage. His son Sam was born in 1906. Sam was a mechanical genius who, in the 1920s, helped Lee de Forest develop the vacuum tube and 'talking' motion pictures and, years later, devised the first fetal stethoscope. He was a Golden Gloves boxer, Manitoba's first amateur radio operator (VE4-1), a gifted fisherman and hunter and, although a civilian, a member of the Winnipeg Police Pistol Team.

Burton's mother, Shirley, was a petite woman with a robust sense of humour and a culinary expertise that is the stuff of legend in Winnipeg's north end. While raising Burton and his two sisters, she managed to serve as a YMHA president and a perennial Hadassah president. During World War II she volunteered for the Canadian Army, and with the wife of the mayor at the time, organized the first Home and School Association in Winnipeg.

Burton attended Luxton School and St. John's High and obtained his first degree in the physical sciences at the University of Manitoba. He was ad seriatim a geologist, chemist, explosives expert with the Department of National Defence and a geophysicist in the Alberta oil industry, before enrolling in law school in 1953. He also is an avid photographer — his photography helped the St. Boniface Hospital Research Foundation raise over a million dollars.

Burton practised civil litigation for ten years and then, with his young family in tow, returned to school to obtain his Masters Degree from Harvard University. When he graduated, his professor wrote that Burton's paper on Future Interests and Estate Planning was graded at "slightly higher than genius." Burton replied, "I shall discard my degree and frame your letter."

While Burton would have been happy to remain in the States, Doris felt strongly about returning to Winnipeg to raise their children, partly because she was an only child and her mother was widowed and partly because she thought that Winnipeg was the best place to raise kids. Today Cynthia (Cindy) lives in Winnipeg with her two sons, Jorel and Shael, while Jeremy, who has a computer honours degree and a MBA and speaks seven languages, lives and teaches in Toronto.

Doris Ruth was the daughter of Louis and Sarah (Promislow) Gorstein from Pavlitch, Russia. Louis immigrated to Winnipeg in 1914 and worked for Milton's Bakery and Drewrey's Brewery as a salesman and in public relations, before going into commercial real estate. He wrote Hebrew poetry, loved discussing ideas, and was well loved by all of Doris's friends.

Sarah and her twin sister, Esther, and brother, Alex, arrived in Winnipeg with their widowed mother in 1921 to join their older brothers, Louis and Samuel. Sarah married Louis in Regina in 1925. Sarah and Louis were unique as first generation Canadians as they had gentile as well as Jewish friends, and people from all walks of life passed through the house. Their home (and refrigerator) was always open to Doris' friends.

Jewish holidays were very important and always involved huge close knit family gatherings with their great matriarch and powerful role model, Sheindel Promislow. Charity was important to Sheindel who visited the Sharon Home weekly well into her nineties, and collected money for Hadassah and other causes.

Doris' fond memories include her mother's devotion to Pioneer Women's Child Rescue Fund and to other fund raising activities. Doris' father was a staunch supporter of the Talmud Torah and every meal included 'Divrei Torah' or 'Pirkei Avot.' An 'idea' man, he was honoured by the Winnipeg Electric Company, who put him on retainer for his suggestions. The monthly pass and the clipping of the transfer to appropriate length to indicate the time of day, were his innovations. Doris remembers that at his funeral, many people whispered, "If only I listened to Louis, I would be rich today."

Doris, whose only brother died at birth, grew up behind the family store and then in a second floor apartment on Salter and Mountain. She attended day school at the I.L. Peretz School until grade seven, and then evening classes there while a student at Machray and St. John's. She was very involved in school, sports and community activities. She was a strong Zionist, editor of the Habonim newspaper, a group leader, on the high school yearbook committee, studied piano and ballet and helped friends with algebra and geometry. She completed one year of architecture at the U of M before realizing that it did not leave her enough time for all her other interests. She switched to the Faculty of Arts, graduating with a double major in philosophy and the social sciences.

Doris married Burton in a small ceremony at her parents' home on Ash Street, followed by a large reception at the Talmud Torah. Doris worked at the Public Library until she became pregnant, and then became a stay at home mom. She served as President of the Ramah Home and School Association and was active in Hadassah, NCJW, Canadian Friends of Hebrew University, poetry workshops, and public relations and fundraising for many organizations. In 1976, after being shortlisted but not selected for two jobs, Doris went into real estate, a career in which she continues to enjoy great success.

Both Doris and Burton think very highly of the Winnipeg Jewish community and are proud of is achievements and of its generosity. They are always happy to help out other people and have a constant stream of people seeking their help and advice, reminiscent of the pattern set in both of their parents' homes.