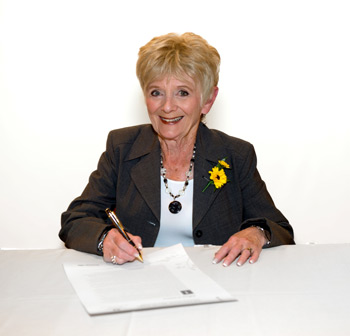 Doreen Short signs her story for the Endowment Book of Life

My philosophy is to live life for now because one never knows what tomorrow might bring, and the past is the past. Still, without the richness of the past, I would not be who I am today.

I was born in Winnipeg in 1938 to Max and Laurice (née Jacobson) Gerb. My father was born in 1906 in Mezirich, Poland, and came to Canada in 1928 on the RMS Ascania. He was the son of Yankel and Cheena Gerb, who were wonderful grandparents to me. Their new life in Canada got off to a rocky start as Yankel originally went to Boston and it took almost three years to get Cheena over from Mezirich. Still, they persevered and lived a beautiful life in Winnipeg. My father was a very hard worker and ran his own company — Gerb Manufacturing — where he produced leather coats and hats. In his very tiny bit of personal free time, he loved fishing — especially fly-in fishing to remote locations (even though he was lost once in the wilderness). He was a wonderful and generous man and I loved him dearly. He passed away in 1984.

My mother was born in Winnipeg in 1917 and I am so happy that she remains a part of my life today. My mother's parents were Shlomo and Gitel Jacobson. They were from Lomza, Poland, and came to Canada in 1906, settling originally in the Manitoba farming community of Bender Hamlet where they lived for 10 years. My memories of my maternal grandparents are vivid: watching my Zaida repair shoes; gathering at their home for Jewish holidays; and enjoying my Baba's delicious baking. I can still taste my Baba's buckwheat latkes, a scrumptious recipe I have been unable to duplicate. My mother was, and still is, a remarkable woman. She was a long-time volunteer with Seven Oaks Hospital, and was active with Hadassah and B'nai Brith Women. She was also an exceptional five-pin bowler and still plays a very good game of Scrabble. Some of my best memories of my mother include trips we took together to Las Vegas and the many entertaining times we had together.

My youth was colourful and fun; we lived on Bannerman Avenue, then Inkster Boulevard, and finally on Matheson Avenue. I was an only child, so my cousins and extended family were very important to me. I remember many family get-togethers, picnics, and extended visits to Winnipeg Beach. I have especially fond memories of going downtown with my mother, my Auntie Fanny Simovich, and her daughter, Anita. For school, I went to Champlain, Luxton, and St. John's (where I was crowned Sophomore Queen). Many beautiful friendships were born at every school I attended. Outside of school, I was active at the YMHA (my club was the "Wise 'Ys'") and I used to love the dances there and at Shaarey Zedek.

In the late 1950s, I met Frank Short on a miniature golfing blind date, and we were married in 1959 at the Rosh Pina Synagogue. We continue to enjoy a beautiful life together in Winnipeg. We raised two children: Howard and Erin. We took family trips to Hawaii and Orlando; and camping trips in a rented RV. Our home became the site of wonderful seders and other holiday dinners.

My children and grandchildren are a source of great pride. Howard is a chiropractor in San Diego. He and his wife, Heather, have two children: Hannah and Chandler. Hannah is studying journalism at Loyola Marymount University in Los Angeles; Chandler is a soccer star who, at the time of writing, is being scouted by universities. Our daughter, Erin, is a dentist in Victoria. Her son Jesse is a computer whiz who works at Google.

Frank is a retired dentist who went back to school in 1970 in Indianapolis to specialize in periodontics. Our time in Indiana was wonderful. Following Frank's example, I, too, went back to school at the age of 34 to pursue my dream of becoming a registered nurse. I got my academic training at Red River Community College and my clinical training at all of the city's hospitals. I worked as an RN for 20 years with stints in surgery, obstetrics and gynecology, and psychiatric nursing. It was a very rewarding career, and it helped me develop an empathy and understanding for others who are less fortunate.

Life today remains full and rewarding. I am proud to help my mother continue to live independently, and I enjoy my leisure time bowling, playing mahjong, and especially golfing.

It is an honour to participate in the Endowment Book of Life program as a way to invest in the future of our community. I hope that we can build a future together where we eradicate poverty and abuse, and provide opportunities for everyone to "live life for today" — with joy and community.