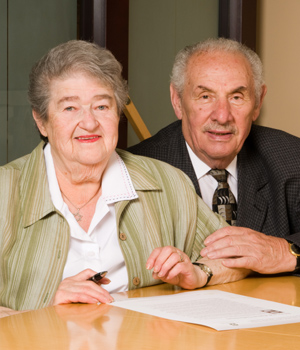 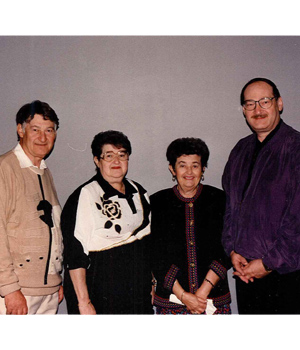 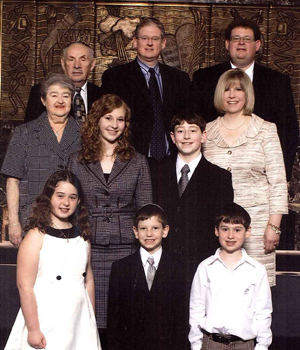 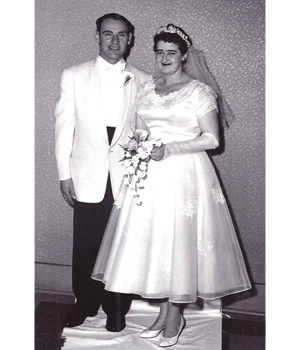 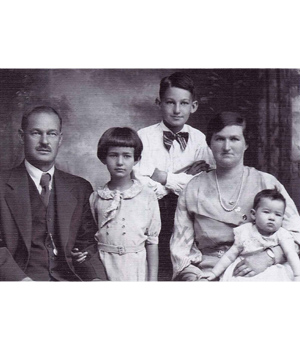 He has numbers on his arm. He has pain in his past. But he has joy in his eyes and he is quick to tell you, "I am a happy man."

Aron Lieberman was born in Pajenczno, Poland on October 10, 1922. He had his Bar Mitzvah there and enjoyed life in a family with his parents, Yakov and Nacha, his brothers Yasil, Moisha, Issac, Shmil, Myer, and Abram and his sister, Franya. On September 4, 1939 the Germans entered the town and Aron was taken from his family. The next six years were spent in concentration camps ... Monowitz ... Pogenburd ... Posen ... Buchenwald ... Auschwitz. After liberation in 1945, Aron learned that nobody in his family had survived. He went to Eindhoven, Holland where he was taken in by a Dutch family and found work with Phillips Electric. In 1954 he came to Winnipeg and in 1958 he married Dora Wise.

David Wise, Dora's father, was born in Reznia, Besserabia, Romania where his parents had a tobacco farm. His mother passed away when he was 18 or 19 and he left Romania and went to Cardiff, Wales where he worked in the coal mines. He came to Canada in 1909 and homesteaded in Camper, Manitoba. The farm burned down about ten years later so he settled down in Winnipeg and worked for the CPR. He later became a peddler selling such goods as fruits, vegetables and flowers. In 1922 he married Esther Goldie Bunis. She had fled Grovno Gebernia, Russia because of the pogroms and had spent a few years in Warsaw, Poland before coming to Winnipeg in 1920. They had four children: Israel (1922-2006), Anne Chmelnitsky, Dora and Julius.

Dora was born on November 18, 1933 in Winnipeg's north end. She attended Aberdeen School and St. John's Tech. Her mother passed away in 1950 at the age of 50, so Dora and her younger brother Julius went to live with their sister Anne and her husband Joe. Both lived with Anne and Joe until they married.

Dora and Aron were married on June 1, 1958. They had two sons, Jeffrey and Garry. Jeffrey is married to Robyn Buchwald and they have three children: Amy, Joshua and Noah. Garry has two children: Brooke and Justin.

Dora and Aron have worked hard all their lives. Aron was the cutting room supervisor at Olympic Sportswear for over 30 years. Dora worked for the City of Winnipeg before their children were born. For 5 years the Liebermans had a grocery store at Chelsea and Brazier in East Kildonan, a life that they found very difficult particularly with young children. Dora later enjoyed 20 years of employment with their neighbourhood Sears store.

But life for the Liebermans has not revolved around work. Their greatest joy is their family. The Liebermans are delighted that their children and grandchildren live in Winnipeg and they are proud of each one of them. Dora loves to cook and bake and make a welcoming home. As grandparents, they have fond memories of babysitting their grandchildren when they were younger. On June 1, 2008 Dora and Aron celebrated their 50th wedding anniversary. With their grandson's Bar Mitzvah taking place on May 3, 2008 the Lieberman family had a wonderful time of celebration together with many friends!

Aron credits Dora for bringing happiness into his life. Dora praises Aron for taking good care of her. The warmth of a good marriage is evident. When the Liebermans think about future generations of their family, their wish is only that they will find contentment and be happy. "Our life is good," they say. "And may theirs be the same."