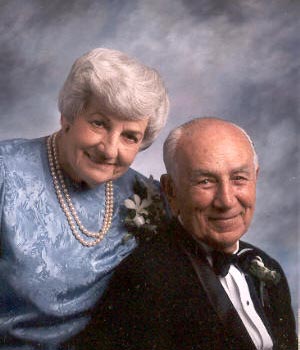 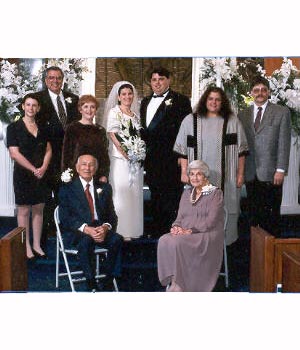 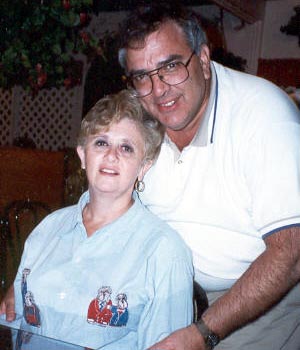 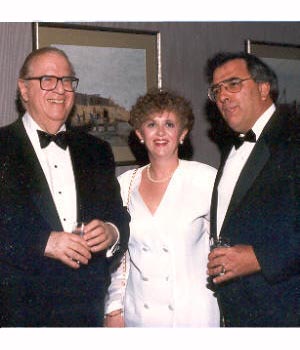 Joanne and Richard Rothberg with Abba Ebban at Negev Dinner 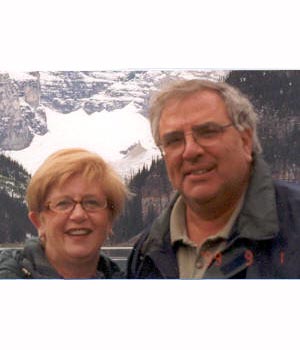 Joanne and Richard at Lake Louise, 1998

My father, Charles Phillip Rothberg, was born in the Province of Gubernia, Russia in 1908. In 1917 the Russian Revolution motivated his parents, David and Sarah, to seek a new life in Canada and they headed for "free land" in Saskatchewan, but got off the train in Winnipeg instead. As a young man my father fulfilled the original dream when he later moved to Chaplin to take a job with a merchant there.

My mother's family also came from Russia. Her parents, Harry and Ethel Lyons, had settled in Saskatchewan, first in Rosthern, where my mother Sally was born in1912, then they moved to Prince Albert, and finally Tisdale. The Lyons and four of their seven children made aliyah beginning in 1927- buying, clearing and planting land near Kfar Savah.

My parents met when she was 11 and he was a very young (15) semi-professional baseball player. They married secretly a number of years later, because she was taking nurses training in Winnipeg and student nurses were prohibited from marrying. After she graduated they married again publicly and began a family - David (1935), Bob (1938), and Dick (1940). After their marriage my father worked for the Tisdale Supply Company, his father-in-law's business, but in 1937 moved to Mont Nebo, Saskatchewan near a large Indian reserve. An outbreak of whooping cough put my mother's nursing skills to the test and when she helped restore the health of the chief's son, the Rothbergs were embraced by the community and their business flourished - general store, post office, fur trading and first aid station with my mother Sally, now a registered nurse, in charge.

In April 1940 my parents moved their young family to Melfort Saskatchewan where they purchased the Star Department Store. My father was the top merchant in town and very active in the political life of the community. One of his recognized achievements as chairman of the school board was convincing the government to match any funds raised by the community for a new school - which resulted in the beautiful "Melfort Composite Collegiate Institute." This funding agreement for MCCI became the model followed by the province with other school districts for years to come. My parents worked hard to raise us in a Jewish home, keeping kosher and staying active in the local shul. When it was time for our bar mitzvot, they imported a man from Winnipeg and hired him to work in the store so he could earn a living while preparing us for our bar mitzvahs.

When it was time for us to attend university, my parents decided we should go to Winnipeg - "there are Jewish girls in Winnipeg". And so it was that I met Sondra Galpern, and we married on July 10, 1962. The daughter of Dorothy (Kay) and Sam Galpern, and younger sister to Anita, Sondra was a very bright, delightful and accomplished woman and we had a wonderful marriage. We had two children, Danny (born November 16, 1967 and married to Helen Friedman), and Sharon (born April 12, 1963). Danny practices securities law in Toronto, and Sharon, living in Winnipeg, continues with her artistic endeavors. Sadly, Sondra passed away from cancer on December 1, 1985.

After university where I finished my Commerce degree and subsequently earned my designation as a Chartered Accountant, I entered my father-in-law's business, Kay's Wholesale. The business grew steadily, mainly due to the demise of competitors, and I enjoyed the challenge of building that company, while also establishing my own enterprises. After Sam passed away in 1994, I wound up Kay's Wholesale and continued with Kayjet Promotions which today is still a thriving business.

My father-in-law Sam Galpern was very involved in the Jewish community - he was chair of the Combined Jewish Appeal during the Yom Kippur war and was one of the early presidents of The Jewish Foundation of Manitoba. My family had always encouraged our participation in community affairs and with a Zionist upbringing, I have been actively involved with the Jewish National Fund since 1972 , including a term as President from 1989-1990. I have also served on the Boards of the Shaarey Zedek Synagogue, Sharon Home, the Winnipeg Jewish Community Council, and Glendale Country Club and chaired the Youth Aliyah dinner.I also enjoy my involvement with the Historic Winnipeg Advisory Committee which oversees development in the Old Market Square area, as well as my various roles in the Boy Scouts Organization of Canada.

On May 29, 1988, I married Joanne Lecker. Joanne has a wonderful daughter, Jodi Hyman, who had a leading role in the bone marrow transplant unit at Royal Marsden Hospital, London, England and now in Sydney Australia in a similar capacity.

I believe that the quality of the Jewish community here in Winnipeg is second to none. Many people have sacrificed to ensure that we have first-rate facilities and excellent programs, and people have given of themselves tirelessly, demonstrating a caring, cohesive network that is unmatched anywhere. We point with pride to a community whose inhabitants have a special caring for one another as well as being identified around the world as a centre of Jewish culture. Winnipeg itself is a great place to raise a family, with a vibrant cultural life and everything a big city has - but without the problems! So many people who have left Winnipeg still speak highly of this place - but my wish is that Jewish people in particular would once again see Winnipeg as a great place to come to, not from. I would like to see this community not just exist, but thrive.