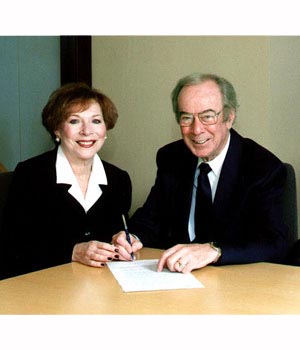 Dick's father David, born in Russia, and mother Helen from the United States arrived in Winnipeg in 1920. Minnie's father Abraham, also from Russia, initially settled in Saskatchewan in 1925. Her mother Freda emigrated from Poland and joined her husband in Winnipeg in 1928.

Dick was very active in music. This included playing the clarinet in St. John's High School orchestras, the piano with professional orchestras and bass fiddle with the University of Manitoba symphony. He then joined Western Smallware, a business created by his father, and assumed the responsibility of managing the sales department. This resulted in its becoming the leading wholesale in Western Canada and one of the largest in Canada specializing in toys. He later formed his own successful sales agency representing many major toy firms.

Minnie's parents owned and operated the very popular Lakeview Hotel in Watrous, Saskatchewan during the 1940's. They later developed a successful kosher catering business in Winnipeg. Minnie was extensively involved with YMHA educational, music and social programming. A life member of Hadassah-Wizo, she volunteered her time to Combined Jewish Appeal serving as co-chair of the Young Leadership Division. She also was co-chair of Hosts for the Mens Youth Aliyah Dinner for several years.

Minnie and Dick have four children: Joady of White Rock, B.C. who has two sons Cory and Jordan, Dr. David Bell, New Orleans, Karyn and husband Paul Burleigh, Los Angeles with Breanne, Jason and Justin, Debby and husband Bob Brown of Winnipeg with Jenna and Jonah. They share a wonderful closeness with their children and are an involved and loving Bubbie and Zaidy.

They both fondly recall attending synagogue with their parents, sisters and brother and the constant emphasis by their parents of observing Jewish traditions and holidays. The Bell and Bay families very often joyfully shared their table with others. Music and good food always accompanied these special times. This legacy continues.

Minnie and Dick are committed in their support for the state of Israel and the Jewish community at large. They are convinced that sustaining Jewish values as well as financial assistance is paramount in ensuring the continuance of Jewish education and social services for current and succeeding generations.