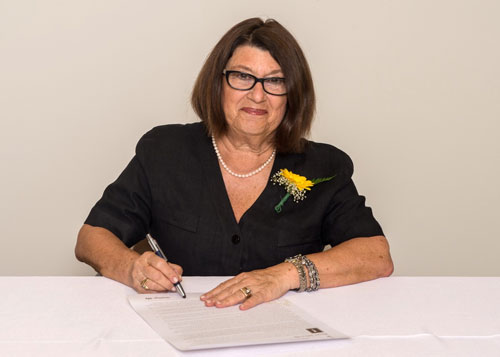 Diane signs her story for the Endowment Book of Life 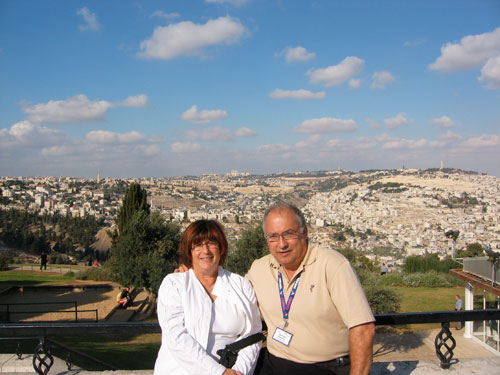 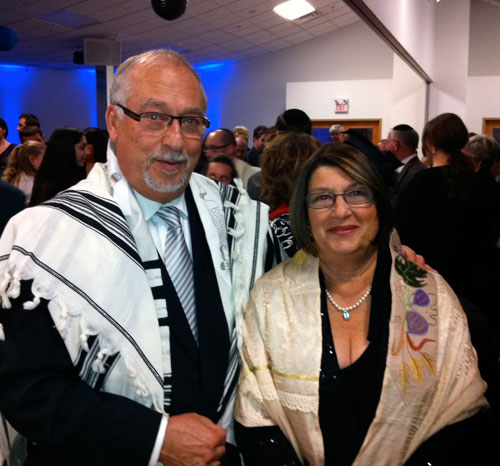 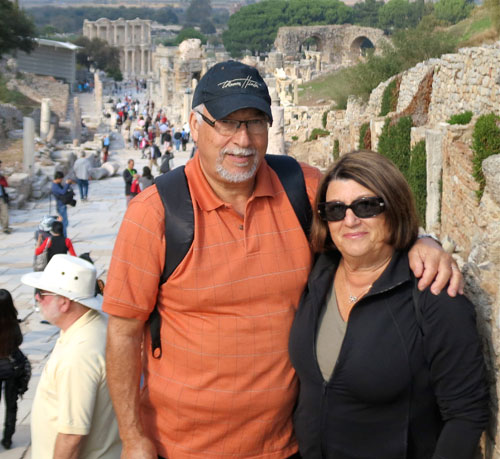 I discovered my connection to Judaism at a convent school in Moose Jaw when I was a teenager. Today, I am a proud member of our community, happy to leave a legacy through the Jewish Foundation's Endowment Book of Life program.

I was born in 1945 in Moose Jaw, Saskatchewan, to Emmanuel (Manny) and Esther Ross (née Minovitch).

My mom was born in Piapot, Saskatchewan, to Fanny and Peter Minovitch. My mother was one of eight children. She was kind, warm, and crazy about her grandchildren. She died in 1989, far too young.

My dad was born in London, England, to Lloyd and Sarah Rosenfeld who were originally from Poland. He stayed in England until he joined the Royal Air Force and was transferred to Moose Jaw where he worked as an airplane mechanic. He passed away in 2005.

My mother's father — my grandfather — was a cattle trader and hotelier. My mother and father met, and got married in 1944 while he was stationed in Moose Jaw. After I was born, they returned to England until I was three. My father had fallen in love with the prairies and wanted to return.

The Moose Jaw years created many fond memories, including spending lots of time with my younger sister, Michele. Our parents were wonderful people. My mom was gentle; my dad a bit more strict. He was a proper British gentleman, after all.

When I was 10, we moved to the town of McCord to take our turn running one of my grandfather's general stores. That was the practice in the Minovitch family; my mom's siblings and their spouses would manage various hotels and stores across Saskatchewan. Living in McCord was an interesting time for me. Although I had many friends there, I loved it when I left for boarding school. McCord didn't have its own high school, so my Jewish parents sent me to a boarding school at the Convent of Sion in Moose Jaw. Until that time, I did not have much of a connection to my Jewish identity, and was even a bit dismissive. It was at the convent that a wise nun encouraged me to learn more about my Judaism: "You need to know where you come from to know where you are going," she said. For that wisdom, I remain grateful.

After McCord, my family moved to Regina to run one of the Minovitch-owned hotels. I went to Central High School and to Success Business College. I left Regina in 1962 for Winnipeg, with plans to move to England. Plans changed, however, as they often do, when I met Richard Boroditsky through mutual friends. Our first date was Slichot services as he sang in his father's choir.

Not a conventional first date, to say the least, but we soon fell in love and thoughts of England went by the wayside and I decided to stay in Winnipeg. I worked as a stenographer and secretary at the University of Manitoba until we had children.

I loved being a stay-at-home mom and a community volunteer. I was an adult advisor with United Synagogue Youth, and active with the Talmud Torah PTA as well as sitting on the board of the Rosh Pina. It seemed like I was always fundraising! I had then — and have now — a strong sense of the importance of community. We always made sure that our home was a vibrant, Jewish place where our kids' friends would feel welcome. In one house we had a pool table, which attracted friends (along with the pop and cookies I would offer). It was only natural that all Yontifs were celebrated at our house, and I loved every minute of it.

We lived in various homes in the North End as Richard was studying and building his practice, and we also lived for a while at Lennox Bell House, a residence for students near what was then known as the Winnipeg General Hospital. When Richard finished his residency, we moved to Louisiana for a few months so Richard could pursue special training. Upon our return to Winnipeg we chose to stay north and raise our family. Today, we split our time between our home in Gimli, our apartment in Winnipeg, and travelling.

When we returned to Winnipeg after Louisiana, I went back to school as a mature student, earning a diploma in library sciences. I then went to university and majored in literature and history and graduated in 1991. Over the years, I did tax preparation and bookkeeping for clients from my home, and also worked in schools helping children to read.

Today, we are proud grandparents. Alan and Lisa have three sons: Matthew, Jordan, and Noah. Michael and Elizabeth have two daughters: Emma and Madeline. I spend my free time golfing and reading.

I hope to be remembered as a good person, who contributed to community life; a Jewish woman who cares deeply for her family and community.