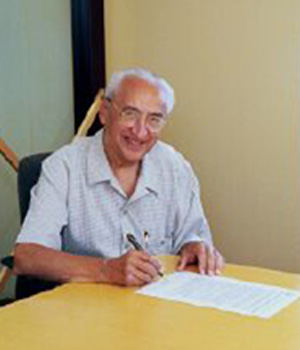 On January 14, 1964, my father Morris and my uncle Israel Globerman were two of the almost one hundred Jewish citizens of Winnipeg who signed their names to a draft bill which was to be submitted to the Manitoba legislature. This bill was passed and The Jewish Foundation of Manitoba was born.

Now, some 37 years later, I am somewhat active as a member of the Board of Governors after having served on the executive for a number of years.

My parents, Morris and Rachel, my sister Esther (Nisenholt) and I came to Winnipeg from Pinsk, Poland in the late 1920's. My brother Abe and sister Nina (Chisvin) were born in Winnipeg.

After four years' service in the RCAF during WWII, I married Diana (Dintzie) Heifetz, whose maternal grandparents emigrated to Canada from the Ukraine at the turn of the twentieth century.

On leaving military service, I went to work in the family furniture business, while my wife, a Registered Nurse, did special duty nursing until the children came along.

As the children grew, Dintzie was able to spend more time in her passion for painting, and with a group of like-minded women rented a studio to enable her to fully exploit her sense of colour. Later she enrolled in the Faculty of Fine Arts at the University of Manitoba and graduated with a Bachelor of Fine Arts - at roughly the same time as our children graduated from their chosen professions.

An early interest of mine was the Jewish educational system, and for several years I was the chairman of the education committee of the Talmud Torah under the guidance of Rabbi Whitty.

An involvement in the Canadian Jewish Congress followed with an especial interest in the Immigration and Resettlement Committee, which lead eventually to the chairmanship of the Western Region of the CJC.

With the impending resignations of the executive directors of the Jewish Welfare Fund, and of the Western Region of the Canadian Jewish Congress, it became apparent that a merger of the two organizations was called for. This eventually resulted in the formation of the Winnipeg Jewish Community Council with David Kaufman as first president, followed by Monte Nathanson. I was elected to succeed Monte.

There followed a two year period that helped consolidate the new WJCC as the voice of Winnipeg Jewry in the councils of the Canadian Jewish Congress as well as in dealing with fund raising, the schools, the social services and the synagogues.

After my term as president, I was asked to take on the responsibility of chairman for the Combined Jewish Appeal for 1977.

After retiring in 1986, I became a volunteer with the Canadian Executive Service Organization (CESO), and with my wife travelled to developing countries helping furniture manufacturers upgrade their skills. Unfortunately, my wife passed away in June 1993, and I have been continuing this work on my own. Due to the amount of travelling involved, my current activities in the Jewish community have been considerably curtailed.

It is my hope that my children and grandchildren will continue to be active members of the Jewish community, to foster Judaic principles and philosophies wherever they may be.