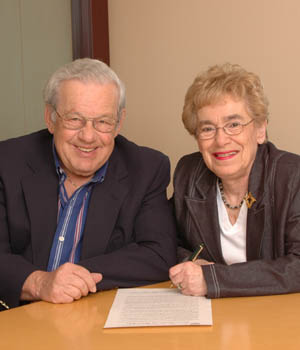 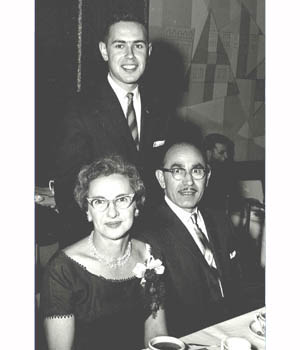 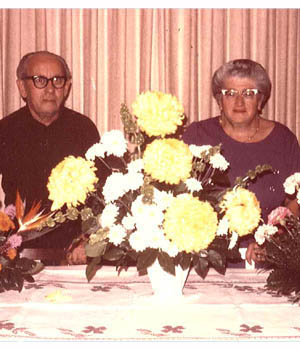 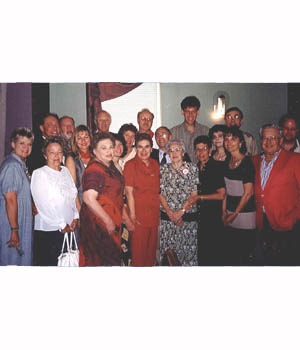 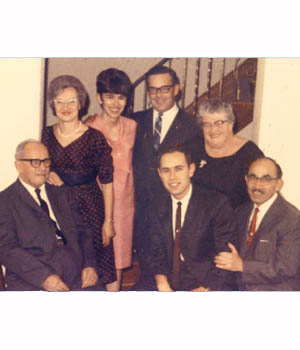 Dena and Henry with their parents and Dena's younger brother, Avrim

As Dena and Henry Katz look forward to their 50th wedding anniversary next year, they fondly look back on their lives as members of Winnipeg's Jewish community - recalling good friendships, satisfying careers, interesting hobbies and fulfilling volunteer work.

Dena's father, Samuel Namak, arrived in Winnipeg from White Russia as a young man in the 1920s. Although he never spoke to Dena about why he left Russia, he often awoke in the middle of the night screaming from nightmares. Dena later learned that her grandfather and several of her uncles had been killed in a pogrom.

Samuel worked as a barber on Selkirk Avenue, as his older sister, Rochel, had wisely insisted that he learn a trade before leaving for Canada. Dena recalls a kind father who listened to the opera every Saturday afternoon and instilled in her a great appreciation of music.

Dena's mother, Geta Ganetsky, also was a Russian immigrant, arriving in Winnipeg with her parents, Moishe and Esther, as a young girl. Geta worked part-time at Misha Pollock's, and was active with the Peretz School Muterfarein. Now 96 years of age, she resides at the Sharon Home.

Dena and her younger brother, Avrim, a social worker in California, grew up in the family home behind the barbershop. At the time, Selkirk Avenue was a fine neighbourhood, although Dena remembers one anti-Semitic neighbour. Dena attended the I.L. Peretz day school, Machray and St. John's, and was active in Habonim. Many of the friends she grew up with remain her friends today. Her closest girlfriend, Lorraine, is someone she met when she attended United College for grade twelve.

After graduation, Dena worked in the Peretz school office for a few years and then in offices in the garment industry. She met Henry on a blind date and they married in 1956 when she was 21. Theirs was the first wedding to be held at the Club Morocco. Rabbi Kravetz agreed to officiate only because Dena's father was his barber.

The newlyweds first lived in East Kildonan, moving to Matheson Avenue east of Main in 1958. They continue to live in this home, just down the street from Etz Chayim (formerly the Rosh Pina), where they have been members for 40 years. In fact, Dena and Henry are currently renovating their home to adapt it to their more senior lifestyle.

�Senior', however, is a relative term for Henry who jokes that while he was born in 1930, he really is only 66 years old. After all, he has no memory of the first nine years of his life before he moved to Winnipeg.

Henry was born in Germany to David Katz and Gertrude Heumann. Miraculously, the family was able to immigrate to Canada in 1939 through the efforts of David's German employer who initially protected them from the daily persecution and then arranged, through a business associate, safe passage to Canada, three months before the outbreak of World War II. Two of Gertrude's brothers also made it safely out of Germany and settled in the United States, but efforts to contact David's family proved unsuccessful.

Henry and his parents traveled to Quebec City by boat and arrived in Winnipeg by train, settling first on Atlantic Avenue and then on Machray east of Main. David, a World War I vet, was a loyal, hardworking man, while Gertrude ran the household and managed the family finances. She was extremely active with the Chevra Mishnayes Synagogue.

While Gertrude and David struggled to learn English at night school, Henry easily picked up the language. He initially attended the Jewish Folk Shul where he completed grades one to four and then transferred to Machray for grade five. At St. John's he was involved in theatre and sports, and was a member of the Orioles Club at the Y.

Upon graduating from Commerce at the University of Manitoba, Henry discovered that many of the best jobs were not being offered to Jews. Turning down job offers out of Winnipeg, as he as unwilling to leave his parents on their own, he accepted a position with the income tax department. Uninterested in remaining a civil servant, he left that job after a year and went into the insurance business. He remained with Aronovitch & Leipsic for 17 years and then moved on to Milnco, retiring from there as vice-president in 1996.

While Henry was active in B'nai Brith Men as president of his lodge and of the Central Canadian Council, Dena was a member of B'nai Brith Women and, later, volunteered at the art gallery. She also worked part time at the Bay for 26 years.

Today, Dena and Henry spend four months of the year in Palm Springs and keep busy with various hobbies. Dena is a voracious reader and Henry enjoys playing bridge. He is a long-time member of Glendale Golf & Country Club.