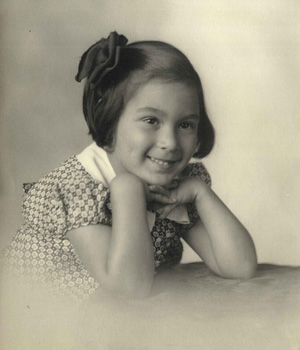 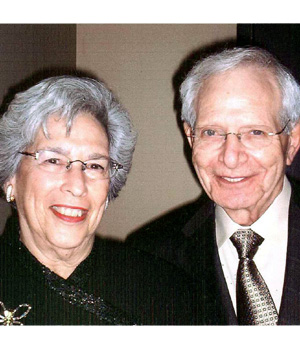 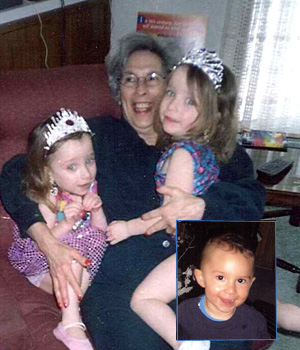 Dee with her grandchildren Rachael and Serena (Adam inset) 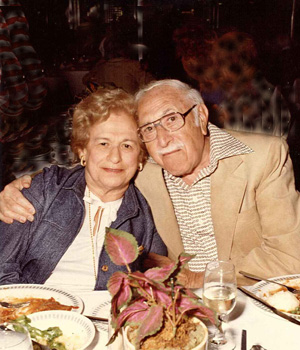 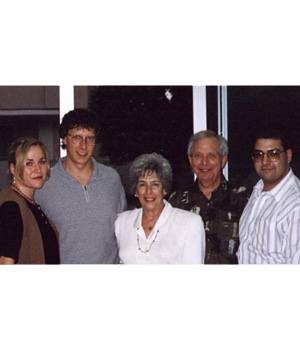 Dee Buchwald was born in Los Angeles, California. Her parents, Joseph and Claire (Blatt) Besbeck were born in the United States and she was raised in a typical American Jewish home of its time. Dee has an older brother, Bob Besbeck. She feels fortunate to have had a close relationship with both sets of grandparents and with her extended family.

It was her relationship with relatives that led Dee to Winnipeg. Her mother was originally from Minneapolis and one branch of that family lived in Winnipeg. The Winnipeggers went to California for winters and invited their California cousins to reciprocate. Dee accepted the invitation and it was on one such trip that she was introduced by Mark and Dorothy Danzker, to Harold Buchwald. (She was her cousin; he was his cousin.) "There was a connection," she says, but the spark was not fanned into flame until some six years later when Harold was in Los Angeles. He looked her up in hopes that she might still be single; she was! In June, 1960 Harold and Dee were married and "the rest is history!"

Dee attended the University of California at Los Angeles and at Berkley. She was employed as an Executive Assistant in a consulting firm when she married and moved to Winnipeg. Here, she was welcomed by the Buchwald family and by Harold's many friends and colleagues. She quickly became involved in Hadassah and in National Council of Jewish Women.

From 1996 to 2005 Dee co-chaired the Board of Directors of the Winnipeg Library Foundation. It was during this time that the Foundation launched an $18 million campaign to develop the Millenium Library. This was a wide-reaching, all encompassing campaign that gained the support of three levels of government and countless individual donors. Dee feels very gratified at its success and the state-of-the-art public library.

Continuing to serve as the immediate past co-chair of the Library Foundation, Dee has also turned her interests to new projects. She is a member of the Advisory Board of the ADAPT Campaign, which works to inspire Manitoba youth ages 10-14 to make positive life choices. She is also a member of the Advisory Board of Manitoba Artists in Healthcare whose vision is to improve individual and community health though engagement with the arts and artists. As well, Dee has served on the Friends of the Canadian Museum for Human Rights Committee since 2006.

Along with her many interests and activities, Dee also derived great pleasure from Harold's volunteer involvements. "Life with Harold was exciting and interesting," she says. She especially enjoyed meeting people from all walks of life, and from a variety of passions and cultures. A special treat was meeting musicians and conductors with the Winnipeg Symphony Orchestra, and dancers and guest choreographers with the Royal Winnipeg Ballet. She also met many extraordinary people working to build and strengthen the Jewish community in North America. At one memorable National Bar Association conference in Ottawa, she was asked to dance by the dashing Minister of Justice, one Pierre Elliot Trudeau!

"Volunteerism has greatly enriched my life. There is great satisfaction in helping others improve their lives. By working on their behalf, you hope to have enriched others, but there is no doubt that you get so much more than you give."

Dee is proud of her family. She has two sons, Jeffrey and Richard. Richard is married to Tracy Leipsic and they are parents of twin daughters, Rachael and Serena, and a son, Adam. Dee is happy that her grandchildren live in Winnipeg and that she can be part of their lives.

In fact, it saddens her that so many young people are looking elsewhere to make their homes. "I wish young people would realize how great Winnipeg is," says Dee. "Larger cities may have more, but really, you can only do one thing at a time and in Winnipeg, it's affordable!"

Love for Winnipeg and for community has motivated Dee. When asked about her wish for future generations, she doesn't hesitate: "To build a better community, you need people who have the courage — the guts — to persist. Find a project you believe in and then give it everything you have." Our community has been fortunate to have found such a person - in Dee Buchwald.