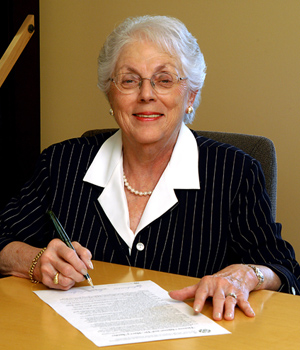 Deanne Lander signs her story for the Endowment Book of Life 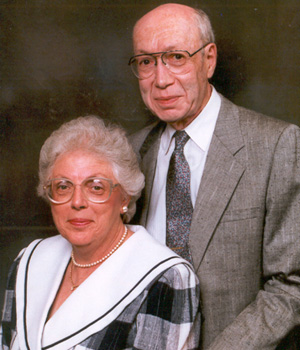 Deanne and Harry Lander aboard the M.S. Noordam, July 1991 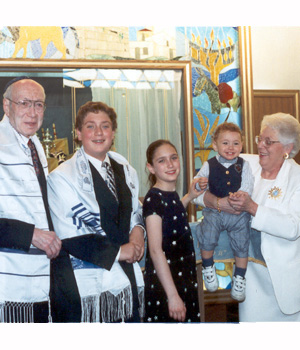 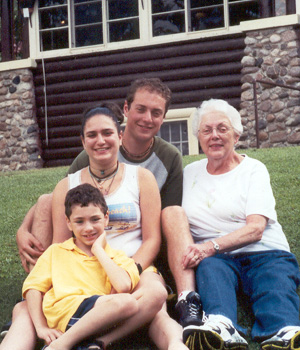 Deanne with her grandchildren Matthew, Danielle and Stephen 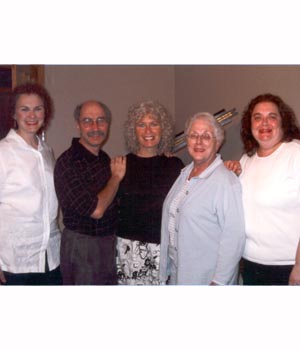 Both Deanne and the late Dr. Harry Lander had a great appreciation for the City of Winnipeg and were glad to be able to raise their family in such a safe, cultured, and easily accessible city.

Harry's parents, Morris and Elizabeth (Lifshitz), were married in Winnipeg in August, 1909, on George Street. Harry was the fourth of five children. He was born at home at 270 Manitoba Avenue on June 15, 1916. His siblings were Jack, Sara, Solomon and Yechiael. Harry's father was a founding member of the Chevra Mishnais Synagogue and remained very involved in the congregation throughout his life.

Education was important to Harry's parents and even though times were hard, Jack and Harry became medical doctors, and Yechiael became a Rabbi.

Harry received his Bachelor of Science degree in 1939 and his medical degree in 1942 from the University of Manitoba. Following graduation, he enlisted in the army and served overseas from 1943 to 1946 as a Captain in the Royal Canadian Medical Corp. Upon his return, he practiced in Erikson, Manitoba for one year. Harry then returned to Winnipeg where he was in family practice for 53 years. He treated several generations of Winnipeg families. He generously gave of his time to the Mount Carmel Clinic and the Sharon Home, and served on various hospital committees. Jewish tradition and his involvement with Rosh Pina Synagogue were also very important to Harry.

Deanne's mother Esther was the only child born to Toba (Rosenblat) and Alter Knelman. Her father, Sam, was one of 10 children born to Basia (Boal) and Joseph Lebansky. Deanne's parents were married in Winnipeg in January, 1929. Deanne was born in January, 1932 and her sister Sybil (later married to Bernie Lerner) was born in March, 1937. They lived in Winnipeg until 1941, when the family moved to Saskatoon. They were involved in the small Jewish community there. Esther was a very active member of Hadassah. Sam was an outgoing, happy person who worked for Buchwold's, a wholesale dry goods business. He often brought travelers home on short notice for a good home-cooked meal. Sam played baseball on a Jewish team and was an avid curler. Sam died at the age of 47 from a massive heart attack.

After Deanne completed grade 12, the family moved back to Winnipeg to be closer to extended family. Esther went to work outside the home for the first time and Deanne enrolled in business college. Upon completion of her course, Deanne worked for City Hydro.

Deanne married Harry on September 2, 1952 at the Rosh Pina Synagogue. The marriage was performed by Rabbi Arthur Chiel. Deanne and Harry lived at 178 Seven Oaks Avenue for 36 years. They had three children — Mark, born in 1953, Terry in 1956, and Debra in 1959. Being a wife, mother and homemaker gave Deanne a great deal of satisfaction. Deanne volunteered at the Rosh Pina Synagogue as well as at the Talmud Torah school and Joseph Wolinsky Collegiate when the children were students there. Their home was a family gathering place for many holiday meals and other happy occasions.

Harry was a dedicated doctor at a time when the practice of medicine was much different than it is today. He made house calls. He made hospital visits to his patients every morning. Even when he retired from private practice, he continued to see his nursing home patients.

Harry and Deanne enjoyed the symphony, theatre, ballet, museums and art galleries. Harry also enjoyed curling and tennis. The family did much traveling together and as a result, all of their children are adventurous travelers and have been all over the world.

Mark (married to Sheila Dudeck) and Debra are both psychiatrists practicing in Winnipeg. Terry is in the travel industry in Toronto. Deanne and Harry have three grandchildren — Matthew Lander, Danielle Lander, and Stephen Lander Stone.

Harry passed away in October 1999. Deanne is confident that he will be remembered for his quiet, unassuming manner, for his patience, and for his devotion to those he loved, as well as to those in need. He was a man of unfailing integrity.

Deanne hopes that she will be remembered as a warm and caring individual who took great pride in her children, grandchildren, and family.

Both Deanne and Harry were happy living and raising their children in Winnipeg, which has a vibrant Jewish community and offers the opportunity for a good Jewish education. Deanne hopes Winnipeg will continue to provide opportunity for future generations of families to grow and thrive in a rich Jewish environment.