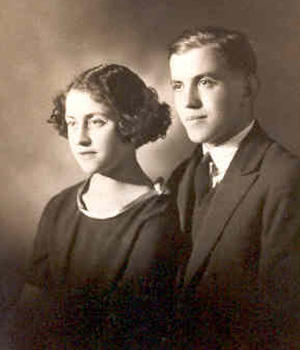 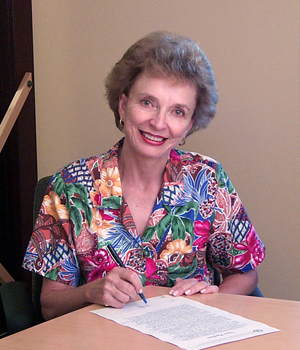 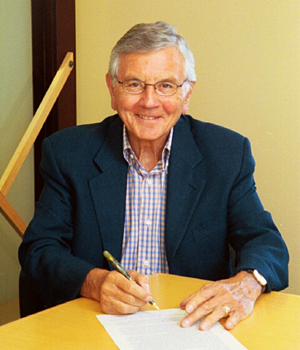 A child learns by example, and growing up in my home I had a wonderful example to follow "mentslechkeit" — as shown to me in the way my parents lived.

My father, Frank Kaufman, came to Canada in 1913 at the age of 14. He came from Ukraine to join two brothers Abe and Norman who had arrived earlier and now sponsored his immigration. After living with his brother Abe in Camper, Manitoba and attending school there long enough to learn English, he went to Bowsman, Manitoba where he learned the retail trade. In 1921 he and his cousin Louis Breen established a trading post in Deleau, Manitoba.

My mother Goldie Charach emigrated from Odessa, Russia in 1908 at the age of 4. She came to Winnipeg with her parents, Avraham and Riva Charach. In 1926 this city-born and raised, noble lady, married Frank Kaufman. He took his bride back to Deleau, a town of 50 souls. I was born there a year later. In 1932 my father purchased a general store in Griswold, Manitoba and operated both as a general merchant and as a cattle buyer. He established an impeccable reputation in a wide area surrounding Griswold as an honest, hardworking man of integrity. A good reputation was very important to my father and I have tried to emulate him in that regard.

After attending public school in Griswold, I came to Winnipeg in 1943 and entered the University of Manitoba. I graduated with a Bachelor of Arts degree in 1947. I had worked in my father's general store since the age of 12 and knew the business well, so after graduation from University my father financed the purchase of a grocery business at the corner of Stafford and Grosvenor — Purity Food Store.

In 1953, I married Nora Silverberg. Early in our marriage, her father, Harry Silverberg invited me to join him in his thriving and multi-faceted businesses, and in 1954 I sold my business and joined the Silpit organization. Harry Silverberg had a brilliant mind and taught me much about business. He gave me every opportunity to learn and to be productive and successful. It was important to him that I become involved in the community and he encouraged me in that direction. He had a passionate love for his community and for the new state of Israel and was truly a community leader.

I have been involved in Winnipeg's Jewish and general community now for over 40 years. My earliest involvement was with the Jewish Welfare Fund (now the Jewish Federation of Winnipeg/Combined Jewish Appeal). In 1966 I served as CJA Chairman and in 1973 as President of the Jewish Welfare Fund. I have been heavily involved in The Jewish Foundation of Manitoba from its inception in 1964. From 1983 until 1986 I served as President of The Jewish Foundation of Manitoba and currently Chair the Foundation's Board of Governors. I served on the Board of Directors of the Winnipeg Foundation for 15 years.

If I have been successful and achieved some of my life's goals, it is largely because of the support and encouragement of my wife Nora. Nora and I have three children: Allan Kaufman, Marcia Cosman and Joy Kaufman (Cohen), and we have six wonderful grandchildren.