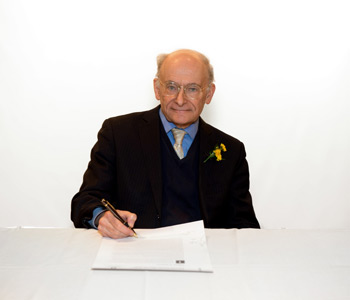 Davis Matas signs his story for the Endowment Book of Life, in memory of Harry & Esther Matas

Harry and Esther Matas were modest people who would have probably declined the opportunity to be included in something as public as the Endowment Book of Life. Their family, however, is proud to share the story of a wonderful couple.

Esther Matas (née Steiman) was born in 1912 in Winnipeg and raised in the North End on Machray Avenue. She was the third of seven children, the daughter of Max and Rose (née Sigal) Steiman. Esther had four brothers: Mannie, Myer (Keppy), Harold (Hashy), and Sam (Eddie); and two sisters: Sylvia and Evelyn (Pete). Max came from Lithuania; Rose from Romania. Max owned a chain of eight "Busy Bee" department stores and proudly used his slogan: "I'm the Man!" His business collapsed and he lost everything when the Depression hit. Undaunted, he regrouped, and launched a new business — Carter's Auction and Furniture Store. As for Rose, one could see where Esther got her inspiration by walking into the house that Rose ran — open, friendly, busy, family-oriented, with an inexhaustible supply of food and endless hospitality.

Harry Matas was born in Winnipeg in 1912 to Simon and Anna (née Rossler) Matas. Simon was originally from a small town near Odessa in what was then Russia, but now Ukraine. Harry's mother came from nearby, Odessa proper, but the two did not meet until they were in London, England. Simon came to Canada first and then invited Anna to join him. They married in Winnipeg.

Simon ran Euclid Meats (later Matas Meats) and the house was attached to the store. Harry was the third of six children. He had three brothers (John, Max, and Roy), and two sisters (Edna and Mary). Harry and his brothers all worked in the store with one brother, Max, making it his career. Harry's mother, Anna, was extremely well-read — in English and Yiddish — and the family is proud that her name lives on through the Anna Matas Memorial Prize for English at the University of Manitoba. Anna died at a relatively young age and then Simon moved into Harry and Esther's home.

Harry learned how to play piano as a child, a skill that proved to be good digital training for his future as a surgeon and doctor, a career he pursued after getting a piano teaching degree. Harry launched his career as a country doctor, working in Morris, Manitoba, and Fort McMurray, Alberta, where he often travelled by sled dog to see his patients. As a general practitioner, he offered a complete range of services including surgery and delivering babies. He was on call around the clock, but a family man through and through. He came home for lunch most days, and rarely went out socially at night.

It was a family illness that set the scene for Harry and Esther to meet. Harry's sister, Mary, was bedridden for years due to the effects of rheumatic fever contracted as a child. Another sister, Edna, would cheer Mary up by bringing friends to visit. Esther Steiman was one of those friends. Harry and Esther started dating and ultimately married in 1940.

The early part of their marriage was spent away from Winnipeg as Harry built his medical practice. While living in Fort McMurray, Esther travelled to Winnipeg to give birth to David in 1943, and then again in 1945 to give birth to Manny. Their third son, Robert, was born in Winnipeg in 1947 after the family came to Winnipeg to live in 1945. They returned to raise their children in a Jewish community and to be close to their very large families. Harry practised medicine at Notre Dame and Arlington, and later on Vaughan Street. They initially lived on Sherburn Street before moving to Waterloo Street in 1953.

The family home was always bustling with activity and packed with people. Memories abound of long tables winding around the house to accommodate 40 or more people on the Jewish holidays. Whether just the five-person immediate family, or a gathering of many relatives from both sides of the family, the dinner table was a place of wry humour, deep discussions, and a running commentary on the state of the world. Esther was the consummate host whose warmth and friendliness spurred the boys' friends to visit both to play and to eat sugar cookies (her specialty)!

When the family moved to River Heights, Harry and Esther became one of the founding families of Herzlia Synagogue with Esther serving as the unofficial "mother" of Junior Congregation. Esther was a very bright person, always an avid reader who kept up with the news of the day. She had wanted to become a teacher, but circumstances did not permit. Being an unofficial teacher at Herzlia allowed her to partially fulfill her dream.

Harry and Esther worked beautifully together as parents. They were both soft-spoken, quietly encouraging their boys to achieve and succeed. They encouraged global thinking along with hospitality and scrupulous honesty. Together, Harry and Esther were also insightful advisors helping the children learn and grow in their studies, teaching them how to lead a good life and respond to challenges.

Harry's and Esther's lives centred around their sons, in whom they took great pride and for whom they provided unending support. Thanks in large part to their solid upbringing, all three sons pursued remarkable careers: Robert became a successful, Vancouver-based journalist for the Globe and Mail; Manny became an accomplished and respected psychiatrist in Winnipeg; and David, based in Winnipeg, became a well-known international human rights, refugee, immigration lawyer, and Member of the Order of Canada. Harry and Esther leave a legacy of four grandchildren: Anna and Sylvia (the daughters of Manny and Maggie), and Jared and Max (the sons of Robert and Alicia).

Harry and Esther's sons have chosen to include them in the Endowment Book of Life as a way for the Matas grandchildren and great-grandchildren to know and remember who their Bawbi and Zaida were. It is also an opportunity to recognize them for their wisdom and humour, their hard work, and their devotion to family, friends, and the Jewish community.