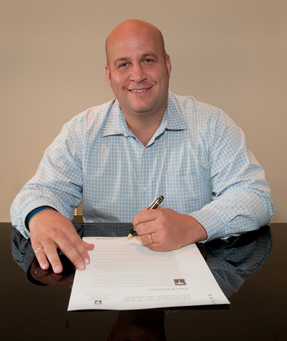 David Greaves signs his story for the Endowment Book of Life

To this day, when I tell people that my grandfather was Aaron Dozar, their eyes light up and they tell me what a wonderful man he was. That's what I want for myself—to live my life in a way that people's eyes will light up when I am remembered.

From my parents, I have learned the importance of empathy and sensitivity. To me, these are essential values that I hope my children will adopt. If this is all that Nesya and Aaron learn from me and Tracy as parents, then it will have been a job well done.

I was born in Toronto in 1967 to William and Faigie Greaves (née Dozar). My father is a sweet man and a mentsch. He was born in Trinidad and Tobago and was poor. His mother, Beryl Dyett, was a G-d-fearing Christian woman; my dad was a mother-fearing son. She was strict, but loving. She died recently at the age of 101. My father immigrated to Canada in his 20's because he was looking for a better life.

My mom is a generous woman who continues to give unconditionally. She was born in Winnipeg to Aaron and Monica Dozar (née Oretzki). My grandmother was born in Winnipeg and passed away in 1975; my grandfather came from Russia and died in 1988. Much of my mother's childhood was spent at her Grandparents department store, Oretzki's, on Selkirk. I have great memories of riding around with my cousins and my Papa in his Lincoln Town Car. My mother's family—Auntie Marsha Dozar; Uncle Marvin and Auntie Penny Kohn; and my cousins, Karen and Sammy Kohn—have played an important role in my life.

My parents met in Winnipeg and later moved to Toronto. While there, my dad converted to Judaism. They returned to Winnipeg after my brother Daniel and I were born. We lived on Borebank, Renfrew Bay, and Oxford. It was a modest lifestyle; my parents were not wealthy but Danny and I never wanted for anything. Through hard work, my dad made a decent living and my mom worked as a nurse. We stayed in touch with our Trinidadian roots and spent Christmas with my dad's relatives, and we always went to the Caribbean pavilion during Folklorama. I also maintain a close relationship with my older sisters from my dad's previous marriage, Phyllis and Adonna.

My dad is now re-married to Elsie. They have had a great life together and married in 1986. Elsie is a wonderful and caring person and we are lucky to have her in our lives.

I attended Ramah School, and then Joseph Wolinsky Collegiate. I moved to Grant Park to be more active in track and field. Outside of school, I played hockey and soccer. While I regret losing out on a Jewish education by leaving JWC, I am grateful for the other formal Jewish experiences I had, specifically BBYO and Camp Massad. BBYO introduced me to new kids; and Camp Massad provided me with a deep sense of joy and Jewish connection. I credit those summers at Massad with my warm feelings about Jewish life and my strong connection to Israel.

After high school I entered the workforce. I loved learning but frankly, I wasn't much of a student. I worked as a waiter and in retail, and gave back to the community by becoming a Big Brother. After some time, I convinced a skeptical head-hunter to recommend me for a job at Sprint Canada; It was a real turning point for my career. After a few years at Sprint, MTS found me and offered me an excellent sales position.

I met my future wife, Tracy Kasner while I was on business in Toronto in 1998. She was on her way back to Winnipeg from Mexico where she had been performing with the Sarah Sommer Chai Folk Ensemble. Not only did I fall in love with Tracy, I was introduced to Chai. She knew I sang a bit and asked me to fill in for the annual concert in 1999. I was mortified to step on stage, but it's hard to say "no" to your fiancé. I performed and I was hooked. Thirteen years later, I'm still in the group.

The other 'group' Tracy introduced me to was her family. Sid, Margaret, and Deborah Kasner accepted me instantly and visits to their home were warm and meaningful Jewish family experiences.

Early in our marriage, I accepted an offer with MTS in Calgary. It was a short, but eventful stay as I found myself on Israel's bobsled team training in Calgary, competing internationally, and trying to qualify for the 2006 Winter Olympics. Wearing a Magen David while representing Israel and the Jewish people in international sport was a profound and moving experience.

To concentrate before hurtling down a track at 80 miles an hour, I would close my eyes. Immediately an image of the Asper Campus would pop into my head. Why? Because here I was celebrating a moment of peoplehood and Jewish community; and to me, peoplehood and Jewish community were all about the Magen David on my uniform, and my community back home in Winnipeg where I was raised and where I live proudly today.

Our time in Calgary was brief. Winnipeg was home and we wanted to return. Tracy became the Cantor at Congregation Etz Chayim and has inspired our community with her beautiful voice and I took a campaign position at the Jewish Federation of Winnipeg. We started our family: daughter Nesya was born in 2005; son Aaron was born in 2008. Our kids are our greatest accomplishment.

In 2010, I accepted my current position as the Director of Development and Marketing at the Jewish Foundation of Manitoba. This is a dream job. My Jewish spark has been ignited by BBYO, by Massad, by Chai, by bobsledding for Israel, and by my wife, and Jewish home. To see the Israeli flag flying proudly every day when I come to work keeps those flames burning bright.

I am participating in the Foundation's Endowment Book of Life, because I have received so much from this community and I want my kids and future generations to benefit like I did. A successful community lets all of us find and nurture our Jewish spark.