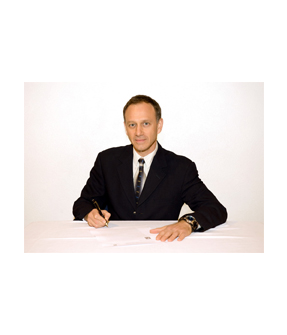 David Gale signs his story for the Endowment Book of Life

A true son of Winnipeg's Jewish north-end, I graduated from JWC, attended the YMHA, danced with Chai and was a camper, counselor and administrator at Camp Massad.

I was born June 7, 1958 to Ruthy (Erlichman) and Hartley Gale. My brother Sheldon arrived one and a half years before me, and my sisters Susie, then Lisa, followed shortly after me.

Although my father was a lawyer, by the time I was born he had joined my maternal grandfather's business, Winnipeg Photo, where he worked until his retirement. My mother was an extraordinary homemaker and heavily involved in community organizations. She was president of the Talmud Torah PTA and NCJW, and volunteered for years at the Village Clinic. She was a great listener and my friends often said that they wished they had a mother like her. At 63 she parachuted from an airplane for a fundraising event.

Creativity, performance and humour were essential to our family life. My father was involved in community theatre, and had a small part in Rainbow Stage's South Pacific in 1966. His involvement in that had a profound effect on me, as I can vividly remember the thrill of going backstage and meeting the actors. That summer, I performed a song from the show at a cast party at our Winnipeg Beach cottage, and the laughs were deafening. I had found one of my lifelong callings — comedy - and have been the family comedian ever since.

My maternal grandmother's family, the Simkins, always celebrated simchas by composing satirical songs, and it was at these that I discovered one of my other callings - song writing. Carrying on the Simkin tradition, I have rewritten and performed countless songs for benefits, birthdays and anniversaries.

Musicals were popular in our home and I became enthralled with many of them. As a grade-schooler I re-wrote the Sound of Music and performed it with my friends, thus discovering two of my other callings — playwriting and acting. In Grade 8, wearing a dog fur beard, I performed as Tevye in Fiddler on the Roof, and was a PTA hit. In the ensuing years I acted in community theatre, enjoying my first critical success at 16 playing Peter Van Damme in The Diary of Anne Frank.

In 1973 I attended the American Class Grade 10 program on Kibbutz Kfar Blum in northern Israel. I had been there for one month when the Yom Kippur War broke out. Although we spent the next two weeks in a bomb shelter, I don't remember being afraid. After the war, the year was filled with amazing trips and experiences, including a year end performance of Pygmalion, in which I played Henry Higgins.

For many years my father was the president of the Chai Folk Arts Council, and as a child I was riveted by the Chai shows. I joined the group upon my return from Israel, four inches taller than when I left, and danced with the ensemble for the next four years. During this time, my songwriting skills were honed at Massad, which I attended from 1968 - 78. In 1975 I teamed up with Lesley Wolman (Corne) for JWC's Yom Ha'atzmaut song festival. We won first prize for our song Artzi and second prize the next year for Kol Yisrael.

After high school I studied theatre at the University of Minnesota, before moving to Toronto in 1979 where I began acting, dancing, singing and improvising professionally.

Over the years, I occasionally came to Winnipeg to work, performing at Stage West and at Rainbow Stage. In 1984 I was cast as Irwin Shubert and the 'under-duddy' in the musical adaptation of Mordecai Richler's The Apprenticeship of Duddy Kravitz. The show was unsuccessful, but gave me the opportunity to befriend Richler and lyricists/composers Leiber and Stoller.

By 1985 I had made it to the Stratford Festival as an ensemble member in The Pirates of Penzance. The next year I began directing — another one of my callings - and founded the comedy troupe, Club Improv. In 1989 former Second City musical director Randy Vancourt and I formed the music/comedy duo Gilbert & Glick. We wrote dozens of songs, performed across Canada, and were compared to the Smothers Brothers and Wayne & Shuster. In 1991 we hosted Camp Massad's 40th anniversary fundraiser, and I finally got to play the Hollow Mug.

Around this time Randy and I began writing an hour long, musical comedy revue about my experiences growing up Jewish on the prairies. We wrote the show about four tummlers from a small Jewish town in rural Saskatchewan and called it Chutzpah à Go-Go. With the help of director Jordan Merkur, Chutzpah was so well received that we expanded it into a full production. It played in Toronto and was later produced at Winnipeg Jewish Theatre, starring Lesley Wolman, Debbie Maslowsky, Randy and me. Following that, it played again in Toronto, Montreal and St. Paul, Minnesota.

In order to write Chutzpah's songs, I drew on many experiences and people from my childhood, including my maternal grandparents. My Zaidy Joe Erlichman had escaped Russia at 19, settled in Canada, overcame tuberculosis, and built a successful business. My Bobi Clara Simkin loved life, people and nature, and had been the inspiration for many of my earlier songs. I wrote the ballad, Canadian Dream, for them, and singing it during the show the day that my Zaidy died was one of the hardest tasks I have had as a performer.

In 1999, I undertook another successful project when my friend and fellow Winnipegger, Allan Novak, asked me to host his new television series, Loving Spoonfuls. In each episode, I shopped, kibitzed, and cooked with a different ethnic grandmother, including, once, with my own mother. We shot four seasons, which aired around the world, and garnered wonderful press. In 2001 I received a Gemini for Best Host. I also enjoyed success acting on television and film, most notably in the groundbreaking, award winning, AIDS movie musical, Zero Patience.

In between these major projects I hosted dozens of fundraising events and award shows — another one of my callings - helping to raise hundreds of thousands of dollars for worthy causes. In 2007 I became involved in union politics and became the vice-president of ACTRA Toronto, representing 13,000 performers.

In 2002 my life changed when my son Eli was born. His mother, Diane Flacks, is a writer/performer, and his mother, Janis Purdy, is a social worker. Eli is talented, funny and creative, and has inherited a love of performing. He is my greatest production ever and through him I have discovered another one of my callings — being a father!