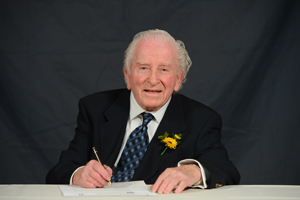 David Favor signs his story for the Endowment Book of Life

The Torah tells us to be generous. I benefitted from the generosity and compassion of others. Today, I try my best to give back, and that explains my participation in the Jewish Foundation of Manitoba's Endowment Book of Life project.

I was born in 1919 in Vancouver and had an unconventional upbringing. My father was not in the picture and my mother, Rachel Weinberg, who had come to Canada from Austria, was overwhelmed by the prospect of raising four boys on her own. So, she sent my brother Morris and me to the Jewish orphanage in Winnipeg. My brothers Irwin and John remained with my mother. I spent many years in the orphanage, and as I reflect on that time in my life, all I can say is "thank G-d she put me there."

My childhood at the orphanage was quite beautiful. I was raised by loving members of the community who took a sincere interest in my health, well-being, and education. I shall never forget Mr. and Mrs. D. Spivak, Mr. Sam Lazareck, Mr. David Barish, and Mr. Leo Davis for their kindness to me. They treated me like family. On top of the care and attention, we also got a new suit and a new pair of shoes every year. I studied Hebrew and history, I sang in the choir, and I learned how to play the saxophone and the trombone. I attended Luxton, Machray, and St. John's High School and did well in class. I was a (reluctant) valedictorian after grade nine at Machray, and was exempt from writing exams throughout high school.

I still hold on proudly to a 1936 letter of reference from the Assistant Principal at St. John's. In part, it says:

"Dave has never disappointed either his fellow students or his teachers in any way. During the two years that he spent at our school, he was not only intelligent and industrious, but reliable, honest, honourable, courteous, and responsible so it is little wonder that he has won the respect of all those with whom he has come into contact—Dave is one boy in hundreds."

Reliability, honesty, honour, courtesy, and responsibility. These are values and attributes I gained in the orphanage and at school, and I've done my best to uphold these throughout my life.

As a teen, I was a member of AZA and remember playing hockey against Ben Hatskin. I wasn't much of a player but I bodychecked Hatskin once and he looked over at me and said: "Good going, Red" (in reference to my red hair).

After high school, I was eager to get out into the workforce. I had been taking from others for so many years and I was ready to get out there and earn my keep. My first job was at Empire News and Tobacco Shop where I worked 75 hours a week and earned $5 for my efforts. I paid for room and board at the home of Mrs. Saper and was able to put a few dollars away. I then took a job as a shipper with National Jewelry and Importing and then did phone sales at Canada Motor Products. In total, I worked for others for five years. When I was at National Jewelry and Importing, I met a young secretary named Nettie Fogel. I fell for her pretty quickly and we were married in 1942.

We lived mostly on Waterloo, in a house I took great pleasure and pride in designing and building myself. We enjoyed a very happy marriage until Nettie passed away in 2003. Sixty-one years went by in an instant. Nettie was a brilliant, loyal, and loving wife. I think of her, and miss her all day, every day. She was not just my partner in life, she was also the inspiration behind our business — Favor Industries. We launched the business in 1948 and sold sculptures all across Canada. Nettie designed the sculptures, we hired a sculptor to interpret her designs, and I would drive across Canada taking orders. We had fantastic customers and loyal staff who stayed with us for a long time. We worked mostly out of a beautiful facility that I built on Pioneer, a property that was ultimately expropriated by the city. We battled the expropriation for years — all the way up to the Supreme Court — but eventually lost our case.

I would be on the road for up to two months at a time for 50 years, setting up samples in hotel rooms for buyers and taking orders. It was a long time to be away from my family. I met wonderful people on the road, and went to many a CFL football game with my fellow travelling salesmen.

Nettie and I were blessed with two wonderful daughters, Mayla and Daryl. We had many beautiful family highlights together, but none greater than our twice-a-year family trips to New York City. I had to go on business anyway, so Nettie and the girls came along. We saw all the Broadway shows and concerts by Frank Sinatra, Bing Crosby, and other greats. It was very exciting. Today, both of my daughters live in Toronto. Mayla is a lawyer; Daryl is an architect. I'm in touch with them every day.

I'm in my 90s now, but still keep pretty busy winding down my business interests. I have a number of friends I enjoy being with, and I follow the organizations I support.

Philanthropy is very important to me and I do my best to support the Jewish community, health organizations, and other charities doing good work. People were very good to me, and it's important for me to give back to society. That's what I've learned.