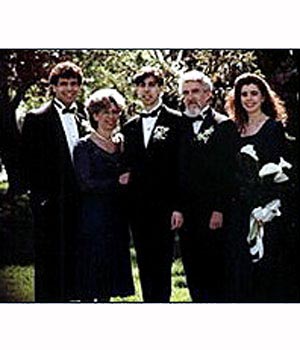 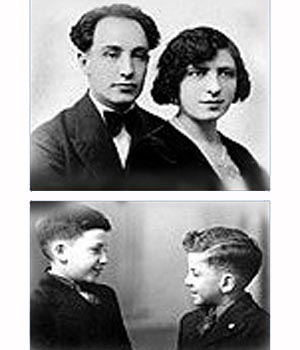 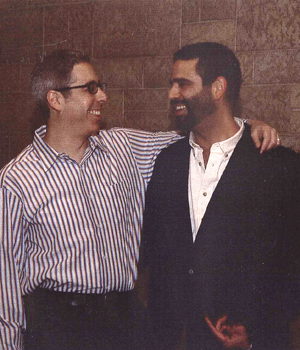 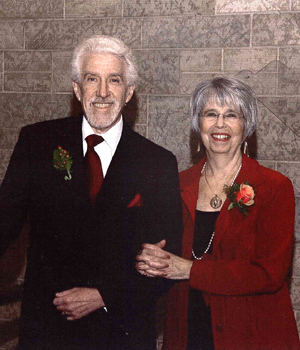 David and Maurene at David's retirement party in December 2004 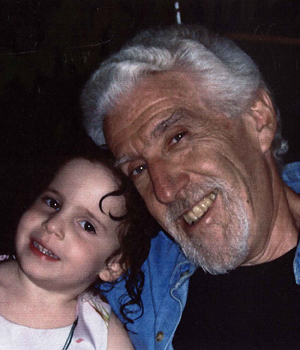 David with granddaughter Ma'ayan in 2005

"Yiddishkeit" was a way of life for our family. Born in Winnipeg in 1938, both my brother, Ben Zion (1934) and I grew up with community as a central theme of our family. I have fond memories of growing up in the North End on Magnus Avenue at my Dreman grandparents' home, on Alfred and St. John's Avenues. Our home was filled with Yiddish cultural activity and centred around life in the Jewish community.

My Dad, Moshe (1900-1987), came from Russia in 1918 and worked at a number of jobs until he became the Executive Director of the I.L. Peretz Folk Shul, which at that time was the preeminent institution in the Jewish community. Over his 40 years with the School, he participated in its growth and was always extremely proud of his connection to Jewish education.

My mother, Edith Dreman (1905-1980), came from Poland in 1907. She played an active role in the Muter Farein (PTA) of the School for many years. My parents were also among the original founders of the Jewish Public Library.

I attended Peretz School, Machray and St. John's Tech. The Zionist Youth Groups (Hashomer Hatzair and Habonim) were a big influence and instilled in me a love of Israel. I belonged to the "Y" as part of the "Bisons". As I grew older, involvement in the Jewish community came naturally to me. I was honored to be awarded the Winnipeg Jewish Community Council Young Leadership Award in 1977. I served as President of Joseph Wolinsky Collegiate (1985-87), and the Winnipeg Board of Jewish Education (1987-89). One of the most satisfying communal activities was becoming the Founding President of the Winnipeg Jewish Theatre in 1987.

In 1961, I married Maurene Levinsohn from Minneapolis. We had three children - Eli (1963), Lisa (1965-1989) and Aaron (1969). I am proud to say that all of our children attended and graduated from our Jewish day school system, and I believe, all were imbued with a love of Israel. They, in their own right, were involved in many activities - Israel Pavilion, Folkorama, Chai and Network.

Maurene also grew up in a home that had a high level of Jewish community involvement. Her support of my activities came naturally and enthusiastically and as a family we always felt a sense of pride in being able to participate and contribute. One of our most fulfilling family traditions began in 1975 when for four years, I was Mayor and Chairman of the Israel Pavilion of Folklorama. It allowed us to represent the Jewish community and make many friends from other communities. In 1982, I was chairman of the Folklorama Festival and in 1985, I served as President of the Folk Arts Council.

In my professional career, I was in the investment business from 1958-1990, acting as Manager of Dreman & Co. Ltd. I was President of the Winnipeg Stock Exchange from 1986 to 1990. In 1991 I began a new career as the Executive Director of the Jewish Foundation of Manitoba. My legacy and that of our family is the knowledge that we have been able to participate in the ongoing growth and nurturing of our community, and hope that future generations will benefit from what we have been able to do, and will themselves continue to build.