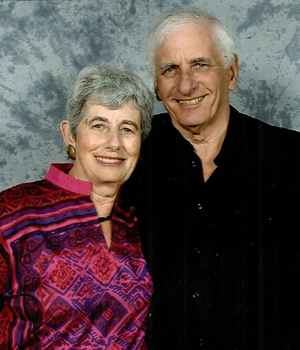 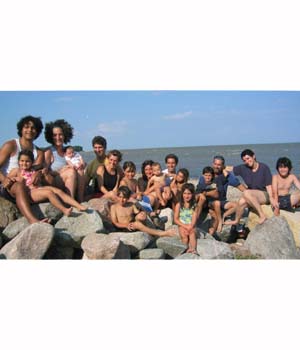 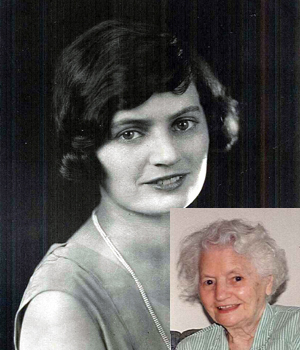 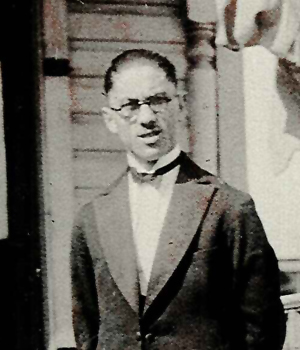 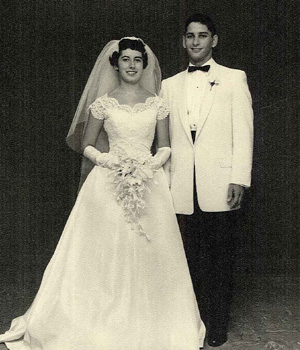 Sheila and David on their wedding day in 1958

By my readings on the derivations of names, I think the name Brodovsky is related to the town of Brody. The suffix 'of' means "the son of' and the suffix 'sky' means 'from', so presumably my ancestors emigrated from Brody to somewhere in Eastern Europe. Brody is currently in the Ukraine but was in the Austro-Hungarian Empire until 1919 and then was part of Poland. The name Brodovsky is relatively unusual, and I have not found any Brodovskys in North America who are not related to me.

My paternal grandparents, Chaim Yossi and Rochel Brodovsky, came from the town of Kvetkai, which is currently in Lithuania, about 70 miles north of Vilnius (Vilna) and about 50 miles southeast of the Baltic port of Riga. They left Kvetkai on their honeymoon in 1894, taking my widowed great-grandmother with them. I don't know exactly when they arrived in Canada or where they went initially, but in 1896 they arrived at the new Jewish farming settlement of Gruber, Manitoba, named after Rabbi Lazer Gruber. It consisted of just six families. It is now abandoned, but is a few kilometers away from the current town of Winnipegosis.

My father, William Brodovsky, was born in Gruber in 1898.He was followed by three more sons, all born in Gruber. The family lived there until about 1905. My grandfather's brother Moishe, also lived in Gruber and they are all named in the 1901 census of the Marquette District.

The land there was terrible — mostly scrub and rock, and the settlement apparently disbanded by 1907. My grandparents, their sons and Moishe then went to the Interlake and were among the original settlers in Bender Hamlet. They farmed or had stores in the Interlake until about 1922, living at various times in Chatfield, Narcisse and Arborg. My grandfather's two older brothers, Max and Goodman, having better noses for climate, immigrated directly to California.

My mother's parents, Shimon and Bassa Smalley (Smolar), came to Canada in about 1907. They emigrated from the town of Miedzyrzec in what is now the Ukraine. There are apparently two towns named Miedzyrzec — this one is near Rowne and is apparently noted for its horse thieves. My mother was the middle of three surviving children, all born in Miedzyrzec. She was born in 1902. Shimon, who was a somewhat unsuccessful carpenter, had immigrated to Winnipeg earlier, spending some time in Boston and then returning to Europe to collect his family. My maternal grandparents had no siblings in Canada, although my grandmother had a half-sister in New Britain, Connecticut.

My paternal grandparents had left the Interlake and moved with three of their sons to California in about 1923. My father was the only Brodovsky who remained in Canada. He had left Bender Hamlet by about 1921-22 and ran various businesses in the Interlake and in Whitemouth, where he had a store for a short time. Later he went into the automobile business, and owned Manitoba Moon Motors, a distributor for the Moon car, a make that stopped production in 1929. He then started Grand Motors on north Main Street just south of the Chesed Shel Emes.

My mother finished high school and Normal School in Winnipeg, and then taught out in the country from about 1922 to 1927. I am not sure when she met my father, but they were married in 1928. They had three children, Eileen, Harvey and me, born in 1932. In May 1933, when I was about five months old, my father died relatively suddenly from a brain abscess. In the pre-antibiotic era, brain abscesses had a mortality rate of over 90%.

My mother somehow survived financially and emotionally during the Depression years, bringing up three small children. In 1939, with the encouragement of Mrs. C.O. (Esther) Swartz, she started a kindergarten in our home. Originally this was at 103 Matheson, just east of the current Etz Chayim Synagogue, but in 1941, we moved to 180 Matheson, just west of the Etz Chayim. My mother maintained this kindergarten in our home until about 1952. Following that, she taught at the Rosh Pina Synagogue and later at John M. King School, until her retirement in 1970.

While we grew up in somewhat difficult circumstances, I never felt that we particularly lacked for anything. My two older siblings both went to university, with my sister earning a Master's Degree in Nutrition, and my brother graduating in Medicine. I finished Medicine at the University of Manitoba in 1957, and married Sheila Pierce in 1958. After two years of Internal Medicine training I then trained in Otolaryngology at the University of Toronto. At that time surgical specialties, particularly in Eastern Canada, were very conservative. The Professor of Otolaryngology at U. of T. told me that I was their first Jewish resident and that they might take another someday. I have been practicing Otolaryngology in Winnipeg since 1962 with my father-in-law Moe Pierce until 1987. I primarily worked at St. Boniface and Children's hospitals.

I stopped operating in 1998 but have maintained an office practice since then. I was active in the College of Physicians and Surgeons of Manitoba, where I served as President. I was also active in the Canadian Otolaryngology Society and the Royal College of Physicians and Surgeons of Canada, where I was a specialty examiner for seven years. I spent a fair bit of time teaching at the medical school, primarily at the post-graduate level and was Director of Residency Training in Otolaryngology for eight years. Over the years, I also have been active in various ways in the Winnipeg Jewish community, and served as Campaign Chairman of the Combined Jewish Appeal in 1984.

Sheila and I have four children, Billy, Stephen, Sharon and Sidney. They are all married and we have a total of nine grandchildren. We are fortunate that Billy and Stephen have both elected to stay in Winnipeg, while Sharon lives in Toronto and Sidney in Guelph.

My purpose in signing the Endowment Book of Life is two-fold. First of all, I want to leave a record for my grandchildren so that they know something of their background. Secondly, the community has been very good to me. When I was growing up my mother paid only a trivial amount for Hebrew School tuition. I have had a fulfilling and satisfying personal and professional life since we returned to Winnipeg in 1962. This is a chance to repay some of that debt.