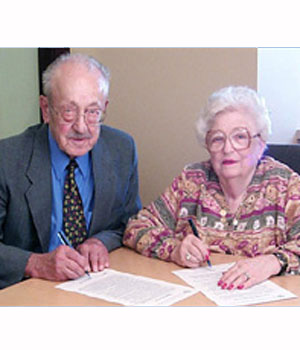 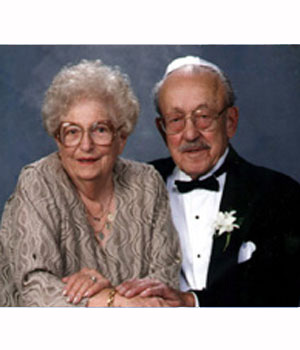 I was born on October 6, 1915. My parents, Jacob and Michla (Etina) Freed were born in Russia and came to Canada prior to their marriage in Winnipeg in 1914. In addition to myself, our family consisted of three siblings: Morris (deceased), Isaac and Gertie.

I attended Machray and St. John's High Schools, and also "Higher Courses" at Peretz School. I especially enjoyed piano lessons, which I began at an early age - they instilled in me a life-long appreciation of good music.

During my teen years, I became active in Young Judea and served as a leader of a youth group. This is where I met my husband, Ralph Hamovich whom I married in 1939. Ralph was already very involved in community work, and this was also to become a way of life for me. I am a life member of Hadassah-Wizo. I am a Founding Member and Past President of Brandeis Lodge Ladies Auxiliary, who honoured me with a "Lady of the Year" Award for devoted service, as well as with an Honourary Life Membership. Canvassing for the Combined Jewish Appeal has been a big part of my life, as well as various activities for the Winnipeg Volunteer Bureau, where I was awarded with a "200 Hour Pin".

Ralph's career with the Combined Jewish Appeal allowed me to make six trips to Israel with him, which were both exciting and stimulating.

Ralph and I have been blessed with three children - Mira (Buchwald) in Winnipeg, and Jerry and Keren (Freed) in Vancouver. We also have eight grandchildren and two great-grandchildren. It was a great joy to celebrate our 60th Wedding Anniversary and Ralph's second Bar Mitzvah in June, 1999.