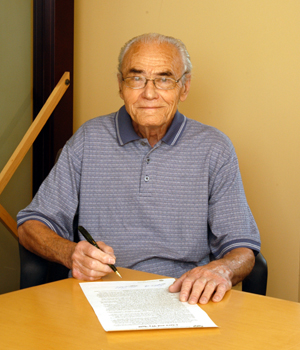 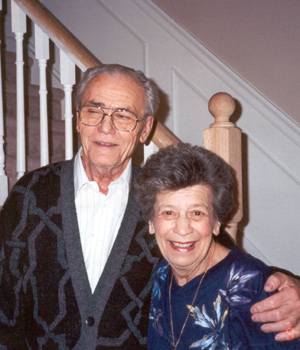 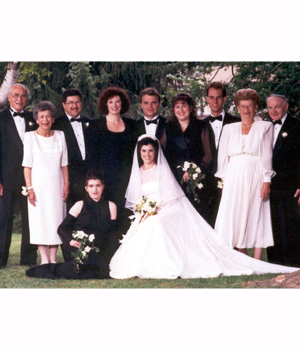 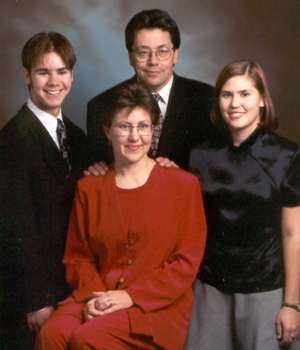 Saul and Kathy with David and Sarah

The Endowment Book of Life program is allowing Hy the opportunity to document his and his late wife Clara's life story by speaking about their individual beginnings, their many years of marriage and commitment to each other, to their family and to the Winnipeg Jewish community.

Hymie's younger years were ones of change, difficulty, and challenge. His parents Fannie and Morris moved to Saskatchewan as homesteaders. His early life was in Shaunovan and Gravelbourg, in the care of his grandmother and aunt because his mother died when he was an infant. At ten he was sent to Winnipeg to live with his father and brother in the Gunn Block. Here he attended Aberdeen School but left at an early age to go to work for his uncle Zalig, and to begin his long career in the tire business. For a period of time he pursued his own tire shop, but finally went to work for his cousin Lou, where he remained for many years until his retirement.

Clara's background was quite different. She was born to Morris and Jennie Poms and grew up in the north end of Winnipeg. Living on Redwood Avenue she attended Machray and later Isaac Newton Schools. Her two older siblings Harry and Freda both left home while Clara was still at an early age. Clara was always industrious and from an early age worked at her mother's side in the kitchen and with her father in his tailor shop. It was at her mother's side that she learned the culinary skills for which she would be complimented all of her life.

They met via a New Year's Eve blind date. Hymie Leibl born in Shaunovan Saskatchewan and Clara Poms born in the Jewish enclave of Winnipeg's north end would forge a relationship and then a marriage that together would last more than seventy years.

As newlyweds they spent their first years in the Poms' home on Redwood Avenue where Fred, their eldest son, was born .When Hymie entered the Canadian Military, he was transferred to Ontario and then to Calgary. Clara, determined not to be left behind followed to Calgary with Fred, where they remained for two years before returning to Winnipeg and the Poms' home on Redwood. Saul their second son was also born on Redwood Avenue and soon after they found a small home on Aberdeen Avenue not far from Clara's parents, to accommodate their growing family. There would be two more moves. One back to Redwood on the death of Clara's mother, in order to take care of her father, and then finally to their brand new home in West Kildonan, where their children grew up, and they resided together until Clara's passing away and where Hymie still resides. The house was a gathering place for family, friends and friends of friends. Barbeque dinners and Jewish holiday celebrations were frequent. Clara's outstanding cooking and baking were always highlights, as was the hospitality.

While Hy sharpened his artistic skills creating a prolific and varied collection of wooden carvings, Clara valued friends. These included the different couples they went out with on Saturday evenings, the Mah Jong group, an institution for 20 or more years, neighbours, and many more. Upon reflection it was Clara who set the standard in terms of family, friends and "doing what was right."

Clara, who loved to travel, was the motivator behind their vacations. In the early years it was outings to Winnipeg Beach or Falcon Lake, often with other families. There were many car trips to American cities. As well as the frequent trips to visit family, she thoroughly enjoyed the annual winter get-away to Las Vegas and their "trip of a lifetime" to Israel.

The Leibl children were taught by example the value of being honest and to treat all with dignity and respect. Clara made sure that the children had a Jewish education and knew of their heritage. She watched her children grow to adulthood, marry and produce grandchildren in which she would take great nachas. Even though distance kept Clara and Hy from seeing the children or the grandchildren as often as they would have liked, they made great efforts to visit frequently, call often and to never miss a birthday, anniversary or occasion. Clara always made the effort to do a little more, for her family, for her friends, and for the community in which she lived. She would have agreed with Hy's decision to support this program as it emphasizes the ideals of family history and doing one's share to provide for a financially strong and supportive community with an emphasis on Yiddishkyt.

Clara will be remembered by all of those that she touched but not missed more than by her husband Hy.