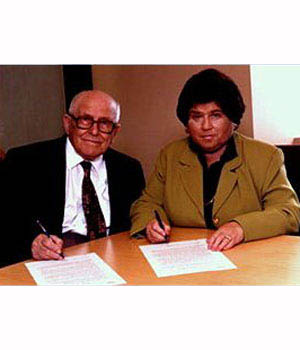 My grandparents and parents came to Canada from Rovno, Poland in 1920. The first place they lived in Canada was Winnipeg. My parents, Abraham and Shantze Nepom, moved to Dauphin, where they owned and operated a clothing store. My brother, Jake and I were born in Dauphin and grew up in the family home at 116 5th Avenue.

I completed my elementary and high school education in Dauphin, came to Winnipeg in 1949 in order to further my education and have lived here ever since. I chose to be a secretary and worked in many government departments, including Veteran Affairs, Unemployment Insurance, Medical Services (Indian Health) and Income Tax.

Even though our family was one of the few Jewish ones in Dauphin, our parents provided my brother and I with a warm and traditional Jewish environment and impressed upon us the importance of maintaining a Jewish identity. Therefore, another reason for my move to Winnipeg was for exposure to a larger Jewish community. I have identified with the Jewish community & Israel through my membership in B'nai B'rith and Pioneer Women.

My brother, Jake (now deceased), also completed his education in Winnipeg, becoming a Chartered Accountant. He married Gyta (Pollock), and their three children Allyne (Winberg), Leslie (Igel) and Michael and their children are an important part of my extended family even though they all live in Toronto. When I married Joseph Kives, a widower, his children Raymond (Barbara) and Harold (Donna) and their children also became my extended family. I take great pride in my nieces and nephews and in Joseph's children and grandchildren.

I believe that it is important for the Jewish community to endure and thrive. In order to do so, it is essential that our generation makes provision for the future, and I am pleased that the Jewish Foundation has established the Endowment Book of Life as a means of achieving this end.