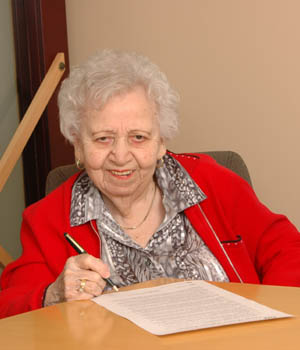 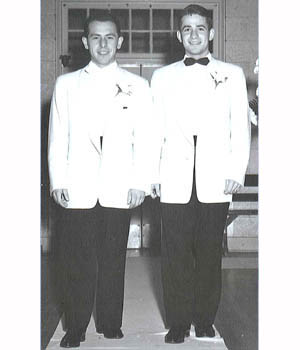 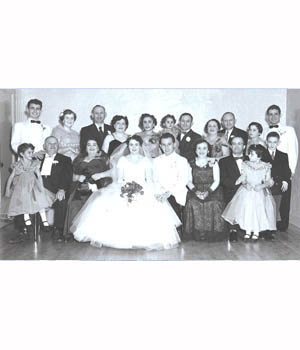 The Tessler Family at the wedding of Ernie and Faye 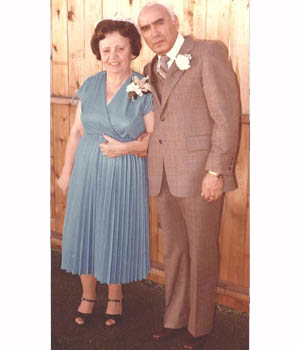 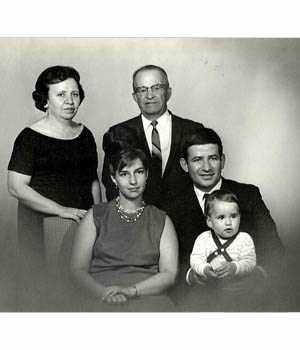 Chaya and Lipa with Ruth, Manly and Ephraim

Chaya was born in Mezirich (Miedzyrzecz), Poland, in 1915, the only girl among six brothers: Shmilik (Sid), Max, Leon, Motel, Mayer and Ernie.

Chaya's mother, Golda, passed away when Chaya was a child. Her father, Zalmen Tessler, remarried Breindel, with whom Chaya enjoyed a close relationship.

Zalmen was a grain merchant and was well off and well respected. The family had many Ukrainian friends and Chaya graduated from a Polish school. Zalmen adored Chaya, his only daughter, and life was good. Then everything changed.

As the Germans invaded Poland, Chaya's brother, Leon, and her husband of ten weeks were mobilized into the Polish army. Chaya never saw her husband again. Her two older brothers, Shmilik and Max, had left for Canada years before in order to avoid the Polish draft.

When the five thousand Jews of Mezirich were herded into a ghetto, Chaya arranged to purchase a German passport that would allow her to work as a domestic in Germany. Shortly before she was to escape to Germany, however, she had a dream in which her step-mother and her cousin's wife implored her to save their sons, ten-year-old Ernie Tessler, whom Chaika had helped raise since infancy, and Motel (Martin) Tennenbaum, then eight.

Chaya returned the passport, hid under a shawl made from a poppy seed bag, and snuck out of the ghetto to find someone who might hide her and the boys. Going from village to village, she eventually made her way to the home of Nastia Cheremecha, a Ukrainian woman who had often boarded at the Tessler home and who had become Chaya's friend. For nine months, Nastia hid Chaya and the boys in the dugout under her wooden oven, a confined space usually reserved for the chickens during the winter months.

As the situation became riskier for Nastia, Chaya and the boys left their hiding place to try and join the Partisans. That first day Martin passed out from the fresh air and Chaya had to carry him on her back. Hiding in the grain fields, where Chaya sat up as the boys slept on her lap covered with her only dress, and alternately begging for shelter from strangers, they eventually made their way to the forest where they lived with the Partisans for 18 months.

When the war ended, Chaya and the boys trekked back to Mezirich, discovering when they arrived that all of the town's Jews, including Chaya's parents, had been shot and buried in a mass grave in Nevirkov. Chaya later learned that her brother, Motel, had escaped to Russia and survived, while her brother, Mayer, had died there.

Needing to earn some money, Chaya teamed up with a Gentile man who had horses and a wagon, and with the knowledge Chaya had learned from her father, they began to buy grain from farmers, mill it into flour and sell it for a profit. They were quite successful, but eventually Chaya wanted to leave the business arrangement. Rather than agreeing, her partner turned Chaya into the police. She was imprisoned for five weeks, beaten, and had three bones in her spine broken. Additionally, all the profits that she had made selling flour were discovered and confiscated by the police.

Mr. Gorenstein, another Jewish survivor (who also immigrated to Winnipeg), arranged for her temporary release and Chaya used that opportunity to gather up the boys and make their way to Rovno and then Lodz. There she married Lipa Spilman, several years her senior. Together they all immigrated to Canada in November, 1948, sponsored by Chaya's brother, Max and uncle, Michel Tessler.

In Winnipeg the men withdrew $1,000 from the bank and purchased Chaya and Lipa a grocery store and home on Gomez and Sutherland Street. After three years in the grocery business, during which they experienced the 1950 flood, Chaya, Lipa and Martin moved to Edmonton to join her brother Leon in his scrap metal business.

They enjoyed 15 successful years in Edmonton, where Chaya began to learn the real estate business. But then, with Lipa's health failing and Ernie persuading them to return home, they came back to Winnipeg. Chaya cared for Lipa, bought a car and went into the Winnipeg real estate market to support the family.

Lipa passed away in 1974 and six years later Chaya married Nuchim Kirshner, a newly arrived Russian immigrant whom she had met on a blind date arranged by her brother Ernie and Nuchim's brother Benny, a friend of Chaya's. During their 20 year marriage they traveled often and enjoyed a good life. Nuchim passed away in 2000, and to Chaya's great sorrow, both Martin and Ernie, the two boys who had become like her own children, both recently died as well.

Now Chaya keeps busy looking after her business interests, playing cards with the other residents in her building, attending events at Gwen Secter and going out at every opportunity. She remains very close to her extended family, including many nephews and nieces and great-nephews and nieces, the offspring of the two boys whom she saved during the war. In telling her story Chaya acknowledges that her life made her resourceful, a positive amongst a sea of negatives.