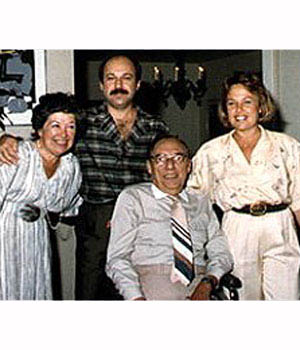 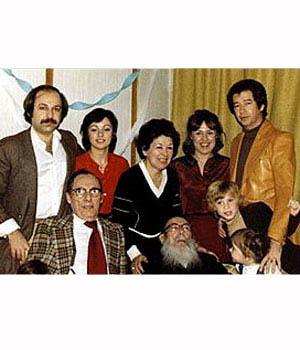 The Max and Celia Lipkin Family

Persecution of Jews and the harshness of life in Russia brought Celia Lipkin's father's family, the Polonskys, to Winnipeg from Pavolich. Rabbi Samuel Polonsky arrived in 1922, and very soon thereafter, effected the migration from Kharkov of his widowed sister-in-law, Minnie Foxman Polonsky, and her two young children, including four year old Celia and her brother Bert, age nine.

Celia grew up on Jarvis Avenue, and attended Aberdeen Elementary School. When Celia was twelve years old, her mother married Abraham Gibbs of Crichton, Saskatchewan, and the family re-located. Celia attended and graduated from Grade 12 at Cadillac High School. During these years, she often assisted her father who was the town's Post Master.

Life in Crichton was difficult for the only Jewish family in the community. Celia's mother, now Minnie Gibbs, observed kashrut despite having to order meat from Winnipeg. Orders from the butcher often did not arrive, but the family could count on the arrival of Chicago Kosher salami. In order to celebrate yom tovim, Celia's parents travelled to the Swift Current synagogue. Celia's parents thus impressed on her the significance and importance of Jewish identity and observance.

The importance of loving family relationships was also keenly impressed upon Celia. She recounts that "as a child I envied my little friends who had both a father and mother. My happiest years occurred when my mother re-married and I had a wonderful `Dad' and younger brother, Gordon (Gibbs), who now lives in Calgary and is highly recognized for his contribution to the visual arts of Alberta." Celia and Gordon have had a very special bond since their parents married when they were small children. At the age of eighteen, Celia chose to move to Winnipeg, and her Aunt Sara Lerman provided a wonderful home for her, and helped her plan her wedding to Max Lipkin (who died in 1993).

Celia transmitted Jewish values and love of Israel (she is a life long member of the Dvorah Drachler Chapter of Pioneer Women) to her two children, Marsha (Eddy) Cowan, and Jackie (Debbie) Lipkin. She takes great pride in her children's commitment to Judaism and the Jewish community, and in their accomplishments - in Marsha's selection as the 1997 Negev Dinner Honoree, and in Jackie's induction into the Pierre Fauchaud Academy in France for excellence in and contribution to dentistry.

Celia's fondest wish for her granddaughters, Reesa and Michele Cowan, and Marissa and Hailey Lipkin, is that "they will continue to participate in, and contribute to, and strengthen their love for the Winnipeg Jewish community and Israel."