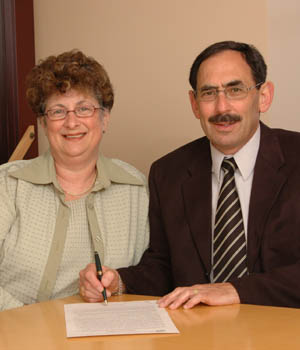 Cecile Devere credits her parents for instilling in her a love of Yiddishkeit that she and her husband David, in turn, have tried to instill in their own two children. Clearly they have been successful, for both their children, Daniel and Janelle, chose in early adulthood to become observant Jews and now live exemplary lives focused on religion, family and community.

Pride in their Jewish identity was central to Cecile's parents, Fela and Abraham Shwemer. Born and raised in Poland, Fela (Wolnerman) and Abraham were Holocaust survivors who survived unspeakable horrors, resettled in a new country, earned a living, and provided their two daughters with security, stability and numerous educational and social opportunities.

Cecile, the younger of the two, was born in 1952. Her sister Betty, four years older, was born in Israel where Fela and Abraham initially settled after the war. Betty left Winnipeg in 1967 and lives in Toronto.

Growing up on Luxton Avenue and Inkster Boulevard, Cecile always felt Jewish and was always very sensitive to her parents' war-time experiences. She was proud of them for surviving. Cecile attended the I.L. Peretz Folk School and St. John's Tech, was active at the Y and sang in the Rosh Pina Junior Choir at the age of 10. As a teenager she was a member of the Winnipeg Organization of Jewish Youth (WOJY), a club that met weekly at Roxy Bowling Lanes and is credited with matchmaking a considerable number of young Jewish men and women in the community. In fact, it was at a WOJY event, that Cecil met David.

While David too was always aware of being Jewish, his upbringing was very different from Cecile's. He was born in 1948 to Fred and Beatrice (Krupnick), both of whom had emigrated from Russia as children. Two of David's older brothers, Harvey and Marvin, died in childhood, while his third brother, Barry, passed away in 2002. His sister Clarice moved away from Winnipeg in the 1950's and lives in Montreal.

As co-owner of Crosstown Electric, David's father did a lot of work for the City of Winnipeg. David's mother worked at Oretsky's, The Man with the Axe, and later volunteered with seniors at the H.S.B.A. Gardens residence. Both were good parents and were very community-minded.

David grew up on Cathedral, Matheson and Jefferson Avenues. He attended Victory School, Edmund Partridge Junior High and West Kildonan Collegiate, as well as evening and Sunday morning classes at the Talmud Torah for several years. He was a member of the Spartans at the YMHA, enjoyed summers at BB Camp and, of course, bowling with WOJY. He decided to become a chartered accountant during a Careers Day exhibition in junior high and began working towards that profession as soon as he graduated from high school.

Cecile began secretarial training at Tec Voc when she finished high school, and began her working career at the Kildonan Canoe Company and then B'nai B'rith Men. She and David were married in 1973. She continued to work, quitting three days before her first child Daniel was born. For many years after that, she helped B'nai B'rith Men organize its annual Humanitarian Award Dinner.

Cecile and David purchased a home in the Maples and sent their children to Talmud Torah and Joseph Wolinsky Collegiate. While David enjoyed early success in his chartered accountancy career — he is a founding partner of the accounting firm Booke & Partners — he made family his priority. He managed to find time to be involved in the community and volunteered for the Rosh Pina Synagogue, United Way, B'nai B'rith, the Combined Jewish Appeal and the Sharon Home. David's involvement with the Sharon Home has special meaning for him as it is a means of 'giving back' for the care his mother received. He also volunteers as a board member with The Jewish Foundation of Manitoba, where he currently sits on the Grants Committee and is the chairperson of the Audit Committee.

Cecile worked at a variety of Jewish organizations including the Beth Israel Synagogue, Joseph Wolinsky Collegiate, the Sharon Home and the Rady Centre. She volunteered in the Rosh Pina Adult Choir, was active with B'nai B'rith Women and sat on the board of the Rosh Pina Synagogue. More recently she has volunteered with the Congregation Etz Chayim and Jewish Child and Family Service (JCFS). Her involvement with JCFS followed in her children's footsteps — both of them volunteered on behalf of the agency when they still lived in Winnipeg. Today, Daniel, 28, is a physiotherapist residing in Toronto. He became engaged to Aviva Schnarch of Toronto in the summer of 2005. Janelle currently lives with her husband, Rabbi Chaim (Michael) Silverstone and young daughters, Devorah Miriam & Shira Bracha, in New York.

As parents of children who have moved away, Cecile and David naturally have concerns about the future of the Winnipeg Jewish community — the fact that so many young people leave the city and that so many of those who remain are elderly. In spite of their concerns, they remain fond of the city and proud of the community and intend to continue working on its behalf. It is important to Cecile to be friendly and helpful to others, and she hopes to be remembered as a good mother and grandmother, and in general, as a good person. David is emphatic in noting that Cecile has been a very positive and constructive influence on his own life and hopes that he will be remembered as a good person too.