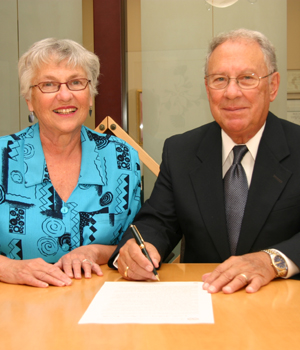 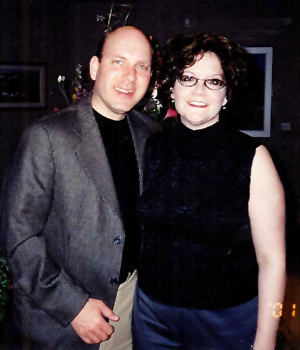 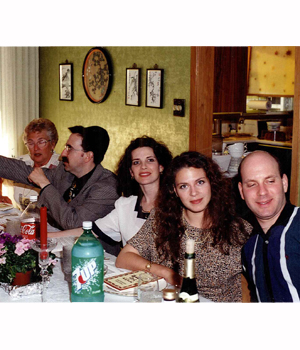 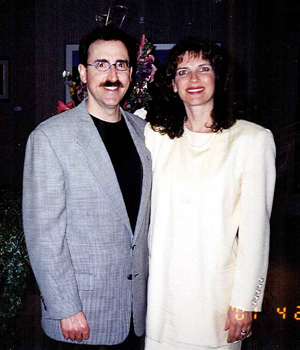 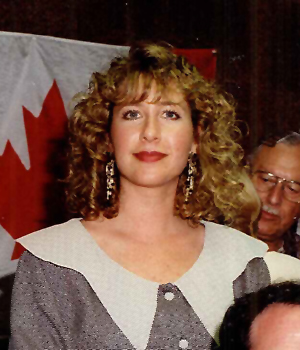 Cecile and Monte Kowall enjoy "the best of both worlds," spending the winter months in Florida and the rest of the year at Winnipeg Beach — their home for the last 23 years. They do, however, travel to Winnipeg frequently to visit family and friends and to attend to appointments and events. Until seven years ago, they also commuted to the city daily for Monte's pediatric practice and Cecile's job in retail sales.

Both Cecile and Monte were born in Winnipeg, although Cecile spent many of her early years in Bethany, Minnedosa with her parents, Sluva and Shmuel Pollock, and siblings Myra, Mischa, Gordon and Harvey. Sluva and Shmuel, Russian immigrants who had arrived in Canada in 1927, ran a general store while Shmuel also worked as a cattle buyer and farmer. Cecile recalls her father's lovely singing voice, honest nature and the beautiful Yiddish poetry he began writing at the age of 68, and her mother's immaculate housekeeping, strong work ethic and compassion. Cecile also has fond memories of her grandparents, Nucham and Tamar Geital Pollock, and Pessie Sturman. Pessie's husband Michael died in Russia. Cecile especially enjoyed Pessie's Yiddish storytelling and Nucham's singing and excited anticipation of one day winning the Irish Sweepstakes.

In 1943, when Cecile was nine years old, the family moved back to Winnipeg and for the first time, Cecile, enjoyed being part of a large Jewish community. She made many new Jewish friends and savoured family get-togethers and sing-alongs every Sunday afternoon. She attended Peretz School after-four classes, and Machray, St. John's and United College, and was active at the YMHA and with Young Judea and Habonim. In fact, many of her best memories derive from the summers spent at Habonim Camp. She met Monte at a St Boniface Hospital party and they were married in 1956.

Monte's parents, Bertha and Samuel, had both emigrated from Russia in the early 1900s with their respective sets of parents - Freda and Samuel Fingerote and Wolf and Deborah Kowall — to escape harsh economic conditions. Samuel, a very active and meticulous man, worked as a merchant for Isaac Cramer and was involved with the Associated Retail Grocers and the Adas Free Loan Association. Bertha, who worked as a cigar maker and a cookie baker, was an affectionate, kind and generous woman, involved with Pioneer Women.

Monte and his brother Bernard grew up on Redwood Avenue in the north end, and spent every Sunday with their large, extended family at Kildonan Park. Monte was a member of the YMHA and Young Judea, and attended school at Machray, St. John's and the University of Manitoba, from where he received his medical degree. After a few years of specialized training in Boston, Monte established his Winnipeg pediatric practice, first in the Mall Medical and then in the Boyd Building and enjoyed an extremely rewarding 45 year career. He served on staff at several Winnipeg hospitals and volunteered decades of service to the St. Amant Centre, the Mount Carmel Clinic and up North at Indian Lake.

During this time Cecile worked as both a legal and medical secretary and began her retail career, while raising their four children. Today, oldest daughter Pam and son Paul both live in Winnipeg with their respective families and daughters Feryn Lisa and Sheri live in Vancouver and Toronto respectively. Monte and Cecile also have seven grandchildren: Alana, Ivy and Rachel Brooker, Sarah and Lainey Kowall, and Nayce and Sienna Lamla.

Cecile also spent many years as a community volunteer, finding her 18 year involvement with the Herzlia Synagogue especially rewarding.She was a member of the Kinneret chapter of Hadassah and with Monte helped to assimilate many Russian immigrant families to Winnipeg. Similarly, years before, her parents had fostered many orphaned children from Europe. Both Cecile and Monte also were very active on behalf of the Cerebral Palsy Association. She helped to establish its Women's Auxiliary and he received a prestigious volunteer award from the organizations for his many years of service.

Now that they are retired Cecile and Monte keep busy with myriad hobbies. Cecile enjoys sewing, furniture refinishing and baking, and volunteers at the Winnipeg Beach personal care home, while Monte collects stamps and dabbles in ceramics and on the computer. While she hopes to be remembered as a devoted wife and mother who maintained a strong Jewish influence in her home and fostered a strong Jewish identity in her children, he hopes to be remembered for his long service to the health and welfare of the children of Manitoba. Through their participation in the Endowment Book of Life, they intend to leave a legacy that reflects their pride in the Winnipeg Jewish community — even though they contently continue to live outside the city at their beloved Winnipeg Beach.