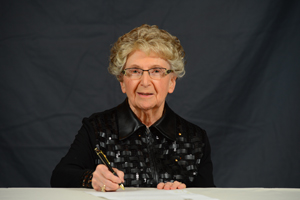 Cecile Meyrowitz signs her story for the Endowment Book of Life 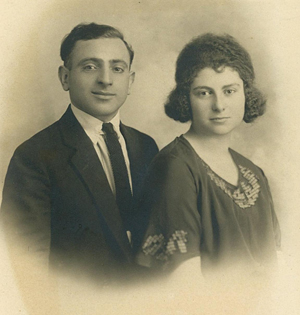 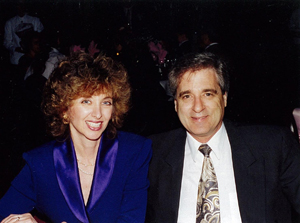 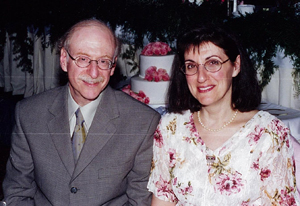 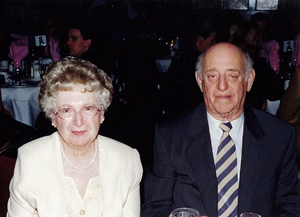 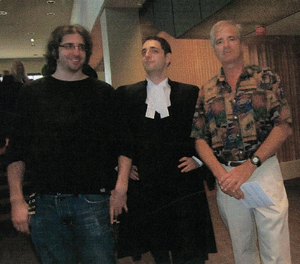 My father, Sam Rutman, was born on March 15, 1895 in Vinezeo, Podolsk, Russia. He came to Canada when he was 18 to live with his sister in Winnipeg. He apprenticed to be a tinsmith.

My mother, Esther Rosen was born on August 11, 1904 in Fargo, North Dakota. Her parents travelled with her to Brandon by wagon and moved to Portage where they started a little grocery store.

My father met my mother while visiting friends in Portage and they married on February 4, 1923. They moved to Detroit and I was born on December 20, 1924. They returned to Winnipeg a year and a half later. My sister Bernice was born on February 6, 1927. Shortly after we all returned to Portage and my father opened a grocery store. My brother Albert was born on November 18, 1929.

My father moved us back to Winnipeg when he became a partner with the Manitoba Heating & Metal Products Company in January of 1930.

I started Strathcona School at the age of five for grades one to six. I then transferred to William Whyte School for grade seven, Machray School for grades eight and nine and then St. John's High School for ten and eleven and finally one year at Dominion Business College.

During my teens, I was a member of Betar and the Hadassah Juniorettes. I also attended the Winnipeg School of Art. While I studied at Dominion Business College, I entered a Canada-wide Underwood Artistic Typewriting contest and won 4th Prize. During my mid-life years, I was active in ORT which I am a life member of.

I met my husband, Sam, in 1946 and we were married on October 19, 1947. I worked in the office of Gunn Garment until the birth of our son, David on April 1, 1951. Our daughter, Arlene was born on October 15, 1955. After David's Bar Mitzvah, I returned to the workforce at Investors Syndicate and retired from there after 20 years of employment.

Our son, David is a doctor specializing in Internal Medicine. He married Irene Boxer on April 13, 1980 and they have two children, Elana and Jesse. Elana is a teacher and is married to Jonathan Waldman, a journalist. Jesse recently graduated from Humber College in Toronto where he majored in music.

Our daughter, Arlene, was a dental hygienist. She married Len Gladstone on August 22, 1976. The have two sons, Ryan and Brett. Ryan has been working at the University of Manitoba assisting visual and hearing impaired students. Brett is a lawyer, specializing in Criminal Law.

Sam and I were members of the American Contract Bridge League and shared the excitement of Bridge competitions at the Tuxedo Bridge Studio as well as tournaments in both Canada and the U.S. We were both Silver Life Masters.

We enjoyed vacationing in Hawaii, Mexico, Las Vegas and Israel. We wintered in Florida for 20 years and enjoyed many Caribbean bridge-playing cruises.

Sadly, my husband, Sam passed away on May 31, 2012, just short of his 94th birthday. Prior to his death, he told me to be sure to leave instructions in my will to donate funds to the Jewish Community. Tzedakah has always been important to both of us.