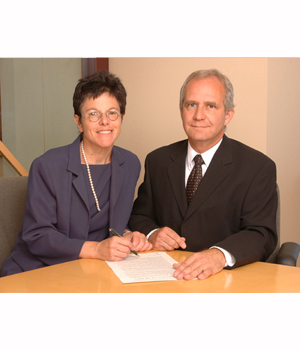 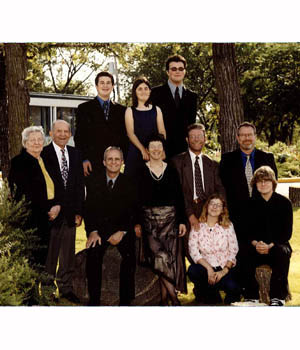 Cathy and Jeff with their children and Jeff's family 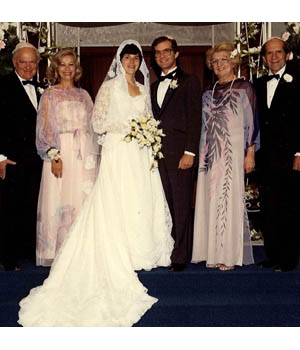 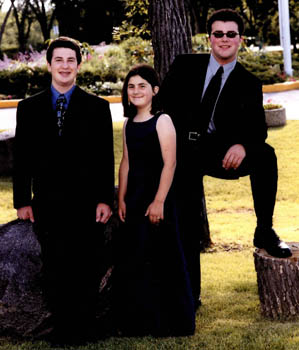 L to R Jonathan, Frannie and Benjamin at Frannie and Jonathan's B'nai Mitzvah in June 2003 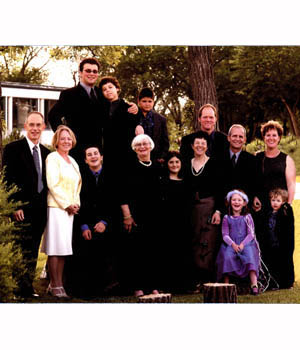 Cathy and Jeff with the Itzkow and Moser families

When Jeff Itzkow first met Cathy Moser at a party more than 25 years ago, he was instantly enamored by her quirky sense of humour and positive attitude in life. After 22 years of marriage, these two personality traits have proved contagious, ensuring that Cathy, Jeff and their three teenaged children - Benjamin, Jono and Frannie - regularly laugh and joke together and always appreciate the good fortune in their lives.

Cathy credits her sense of humour, her devotion to family, and her zest for life to her parents, Ann and Sam. Throughout many adversities, including Sam's debilitating Parkinson's disease and, much later, Ann's cancer, Ann and Sam maintained their love of life and their positive attitude. It is hoped that these qualities will be the legacy that lives on in their children and grandchildren. Their story is chronicled in the Endowment Book of Life.

Cathy attended Talmud Torah and Joseph Wolinsky Collegiate. Her parents supplemented their children's parochial school education with travel, theatre, and exposure to worlds and ideas different than their own. For many years Cathy regularly attended Junior Congregation, was involved with the YMHA, and when she was 14, volunteered at a teen drop-in centre on Dufferin Avenue.

Although Cathy began university with the intention of becoming a social worker, she was excited by Psychology and chose instead to pursue a doctorate in that field. Upon graduation, she began working part-time at the Child Guidance Clinic, moving from there to private practice in 1995, the year her father died and her youngest child started kindergarten.

Like Cathy, Jeff is Winnipeg born and the product of a parochial school education. He grew up on Semple Avenue with his two older brothers, Martin and Arthur, and his parents Bill and Dolly. Bill was a kind, patient and athletic father with a good sense of humour. He earned a living as a plumber and often had his sons help him out on the job. Dolly, who had immigrated to Canada from the Ukraine as a child, was a stay-at-home mom, active in ORT, Hadassah and the B'nay Abraham Synagogue Sisterhood.

Jeff enjoyed a good childhood, largely spent "hanging out" with the neighbourhood children. From his brother, Martin, he learned the basics of photography and became proficient in darkroom techniques. He has been going to Winnipeg Beach since he was a young boy and still continues to look forward to summers there. After high school he traveled to Europe and Israel, and then returned home to study and obtain a diploma in Electronic Technology from Red River Community College, and then a degree in Computer Engineering from the University of Manitoba.

While Jeff worked in Engineering for many years, 15 years ago he switched careers and began working as a property manager with his own company, AccuManagement. He also serves on the Board of Directors of the Canadian Friends of the Hebrew University and the Professional Property Managers, and is very involved in his children's lives.

Benjamin currently is a student at the University of Winnipeg, Jono is a student at the University of Winnipeg Collegiate, and Frannie attends the Gray Academy. They are all involved in a number of activities and sports and, last summer, pooled their Bar and Bat Mitzvah gifts and brought a student from Israel to B'nai B'rith Camp and Winnipeg for a holiday. Jeff is as proud of Cathy as he is of his kids, boasting of her innate goodness and the way in which she helps people through her professional practice.

In spite of a busy and demanding career, Cathy remains very family and community oriented, and is always working on one project or another and thinking about how to improve her family's life. While she is proud of and appreciates the Winnipeg Jewish community and would be happy if her children all stayed here, she wants them to go where they will be happy and where they will be able to live meaningful and balanced lives. Jeff too thinks positively of the local community as a place that raises mensches, and would be happy for their kids to remain here.