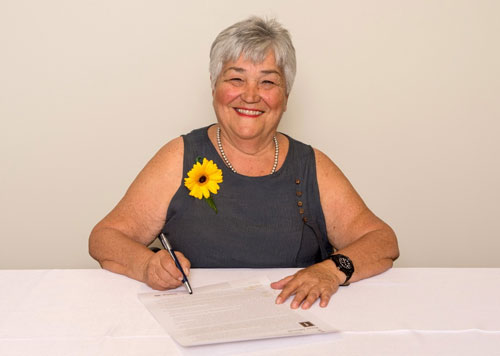 Carol signs her story for the Endowment Book of Life

I learned the lessons of charity and community while growing up in Canora, Saskatchewan, and later in Winnipeg. My parents were remarkable, hard-working, and generous people. The example they set shaped my life.

My father was Leibl Frank. He was born in Kowel, Poland, in 1907. His parents were B'tzalel and Bracha (née Roizen) Frankfowicz. They were both murdered by the Nazis in a two-day rampage that saw 18,000 Jews end up in mass graves. Before coming to Winnipeg, my father had been married to my mother's sister — my Aunt Sarah.

My father came to Winnipeg in 1929 to start a new life for his family. Sarah was not allowed to leave Poland because she was pregnant with Minnie. He chose the city because my mother — his sister-in-law and second cousin — had already settled here in 1926. Sadly, Aunt Sarah died in Europe in 1937. Later that year, my parents got married. My father went to Halifax to welcome his daughter Minnie to Canada. She was young and came over by herself — near death with a ruptured appendix.

My mother was Tzeitel Frank (née Beiner). She was born in 1903, also in Kowel. My mother's parents were Chaya Bayla Beiner (née Seltzer) and Aryeh Leib Beiner. Aryeh Leib was a very successful lumber dealer. He died of typhus in 1917. Chaya ran a liquor store and was killed by robbers in 1921. After they were married in Winnipeg and had brought over Minnie, my parents moved to Canora, Saskatchewan. My mother gave birth to me in Winnipeg where she had friends to look after her.

Growing up in Canora was a beautiful experience. I have strong childhood memories of having the run of Franks's Department Store, our family's business. We were one of only a few Jewish families in the town, yet I never experienced any anti-Semitism. In fact, my parents had friends of all backgrounds and my father enjoyed speaking in Ukrainian with his customers.

For the Jewish holidays, we travelled to Melville to celebrate with the Weinstein family. Jewish life was very important to my parents, especially my mother. My sense of Yiddishkeit runs very deep and so does my Zionism. My parents were very excited by the movement and thrilled to see the establishment of the modern State of Israel.

In 1948, my mother and I moved to Winnipeg and lived initially on Tait Avenue, later on McAdam. Minnie had come a few years earlier for high school and boarded with a family. In Winnipeg, my mother became very active with Na'amat. My father still ran the store in Canora, driving 12 hours — much of it on gravel roads — to see us as often as he could. He was a dear man who cared deeply about his immediate and extended family.

In Winnipeg, I went to Peretz School, Machray School, and St. John's High School. My youth in Winnipeg was wonderful. I took ballet lessons with the Royal Winnipeg Ballet, studied piano, played baseball in the neighbourhood, and enjoyed my YMHA club — the "Y So Blues." Summers in Gimli are also a special memory, and I remember staying there during the 1950 flood in Winnipeg. One of the key elements of my youth was my deep relationship with Minnie. She was several years older than me. She was like a mom at first, later a confidante, and ultimately a dear friend. When she died at the young age of 42, I was devastated.

After high school, I started studying at the University of Manitoba, but then met and married Benjamin Ostfield from Fargo, North Dakota. We met while he was here visiting relatives. After getting married at the Rosh Pina Synagogue, we moved together to Grand Forks, North Dakota, where Ben was studying accounting and law. We then moved to Minneapolis because we wanted to raise children in a larger Jewish community.

Ben and I had four children together: Barbara (1958); Janet (1961); Sue (1964); and Nancy (1965). I was a very busy mom, but still found time to volunteer with the Beth El Synagogue Sisterhood and Hadassah. And after the kids started school, I took an active role in Ben's accounting business and ran one of the satellite offices. We also ran a quick-printing business; and we hosted three of Minnie's kids in the summers after she passed away.

Ben and I divorced in 1983. In 1987, I married Jerry Woodward. We had a wonderful life together and travelled a great deal. We came to Palm Desert, California, as snowbirds and ultimately moved here year-round (although I still keep a home in Minneapolis). Jerry passed away in 2008.

Today, I am a proud grandmother and I still keep a few tax preparation clients. I'm very involved in the Palm Desert Jewish community (especially Hadassah) and I volunteer at a local theatre.

I am proud to participate in the Jewish Foundation of Manitoba's Endowment Book of Life program. It's my way of giving back to Winnipeg, and another way to demonstrate the importance of charity and community work to my children and grandchildren.