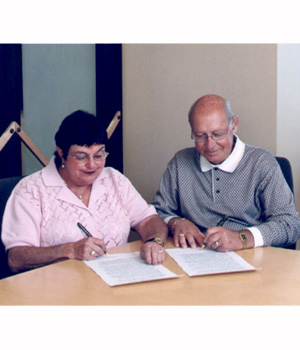 Between the years 1905 and 1914 seven out of eight of my great-grandparents immigrated to Winnipeg from Russia. My mother Ida's parents Herschel and Sheva (Cohen) Zipursky came from Orechev, and my father Bill's parents Zamvel and Bracha (Winestock) Migivosky arrived from Nicolaev and Alexandria. The name Migivosky was later shortened to Migie. On arrival they established themselves as cattle dealers, butchers or general store operators.

An education was very important to the Migivosky family. My grandparents ensured that all three of their children graduated from university, including my father who became a pharmacist and for many years owned and operated Migie's Beverly Drugs on Portage Avenue.

My early years were spent in the North End on Inkster Boulevard and later on McAdam Avenue. I attended Champlain and Machray Schools and St. John's Tech for High School. I received my education degree at the University of Manitoba. I have two brothers, Arthur who was born in 1941, and Howard, born in 1947.

As a youngster I was active in the 'Y So Blues' club at the YMHA and the BBG group 'Delilahs'. I have fond memories of my three summers at Habonim Camp in Sandy Hook. Friendships made during those years remain important to me now. I remember vividly visiting all the synagogues in Winnipeg during Yom Kippur, and celebrating Chanukah parties and Passover Seders at the Hebrew Sick Benefit Hall with my large extended family.

I have been involved with the Jewish Community for many years. I have had a rewarding successful career as an educator for the Winnipeg Board of Jewish Education from 1972 to 1998. I worked as a resource teacher and librarian at Ramah Hebrew School, Talmud Torah I.L. Peretz and the Gray Academy of Jewish Education. I continue to work part-time as a substitute teacher. One of my volunteer activities includes co-chairing the 1987 CJA's Super Sunday campaign with Morris.

Morris and I are relishing our busy retirement - spending time with our grandchildren, travelling, playing bridge and enjoying summers at Falcon Lake.

The Jewish Foundation, through the Endowment Book of Life, is an excellent way to pass on our family history and Jewish values, and to help ensure the continued growth of our community.