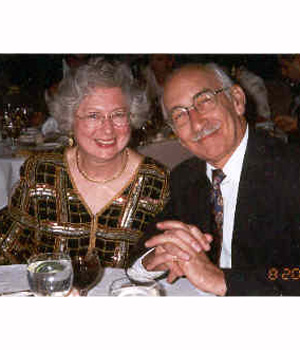 Bunny and Gerry Gurvey, 1995 at the Silverman wedding 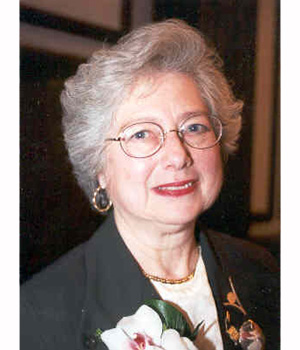 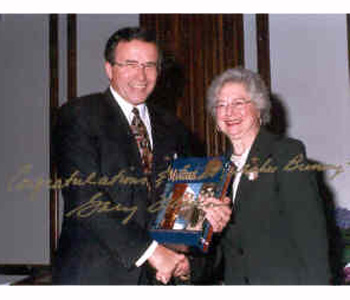 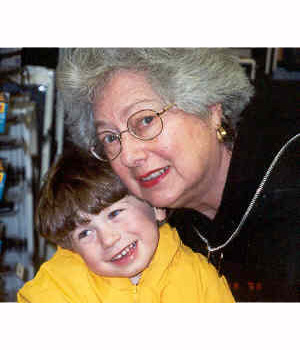 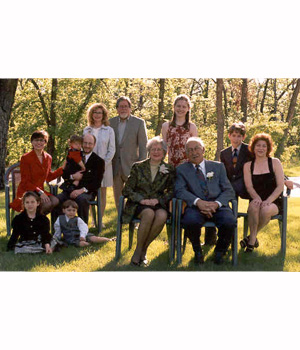 My father, Samuel Pinsk, from Regina via Russia married my mother Ida Greenspan, from New York, via Russia. They settled in Regina, Saskatchewan and raised their family of Goldie, Dora, Sadie, Anne, Zolman, Mona, and me, Bunny. My memories of my father are of a handsome, religious man who died at an early age leaving my mother to raise our family. I remember my mother as an educated, citified woman who accepted change as a constant. My family's move to Winnipeg was initiated when one of my sisters married a Winnipeger and two other sisters followed. With three daughters living in Winnipeg, my mother, who had never been to Winnipeg ventured with her remaining four children and we began our life in Winnipeg.

When I reflect on my childhood/teenage years in Regina, I fondly remember the experiences of attending evening school at the Talmud Torah. My best memories are of involvement in Girl Guides of Canada, skating on the neighbourhood rink and forging friendships that have lasted until today. This early contact began my lifelong commitment to Girl Guides.

In 1948 I married Gerald (Gerry) Gurvey. After three years of living in Winnipeg, we moved to Toronto and started our family. We have three daughters, Shelley, Melanie and Brenlee. We now have five grandchildren, Kelsey, Mac, Ilexa, Avery and Brady. Four years later, we returned to Winnipeg where Gerry owned and operated Uptown Pharmacy on Academy Road.

Volunteering became a very important part of my life. I was involved in many diverse organizations such as River Heights Community Centre, Herzlia Academy and Creative Retirement. Girl Guides of Canada and National Council of Jewish Women of Canada (NCJWC) became my prime focus. In the early 1970's, I was elected President of NCJWC Winnipeg Section, working in many capacities until I was elected National President of the organization. In Girl Guides, the most challenging position I accepted was that of International Commissioner. Through NCJWC and Girl Guides I have served on International Boards and have been involved in many challenging projects. This involvement culminated in my election as Vice-President for Canada of International Council of Jewish Women.

I progressed to become Chair of the Ottawa Advisory Committee to the President of the Treasury Board, Government of Canada, on Employment Equity. I represented Canada as a delegate to the United Nations Decade for Women in Nairobi, Kenya. This was followed by an invitation to act as a panelist on the Health Forum in Montevideo, Uruguay for the Latin American Convention of the International Council of Jewish Women (ICJW). Among the most significant events in which I participated as a delegate was at the signing of the Global Banning of Anti-Personnel Land Mines Treaty hosted by the Government of Canada in Ottawa, and the Conference on War-Affected Children held in Winnipeg.

In 1997, I was proud to be recognized by the Premier of Manitoba receiving the Premier's Volunteer Service Award. This award was extended to me due to my involvement in initiating and driving the production, implementation and distribution of the Health Education and Learning Project (HELP). In the same year, I received the Centennial Membership Award from NCJWC Winnipeg Section.

When reviewing the path of my life, I am happy that I put my roots down in Winnipeg. My volunteer efforts and my ability to raise my family, and sustain friendships, have given me a strong feeling of satisfaction. I feel that the future of Winnipeg Jewish life holds much promise. I believe that if more of our young people can see a productive and fulfilling place for themselves in Winnipeg, the whole community will benefit.